F1 Pr0n: Williams FW35 And thus, the last shall be... um... last?  Williams F1, the legendary "final privateer", has had a bad run of it as of late.  This team, one of the truly great Formula 1 names, hadn't won a race since 2004, and really didn't even seem like they were even close.  In 2011, in fact, they were 9th in the Constructor's Championship with a paltry five points.  Ah, but last year they came up off the mat with a win by Holy Man Maldonado in Spain, leading some to hope that the team was on their way back.  Let's see what they can do with their new car, the FW35! 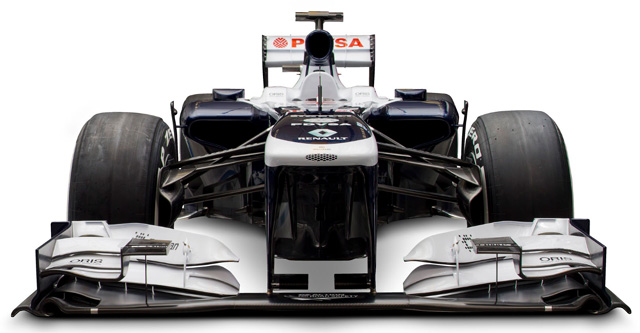 Well, nothing too out of the ordinary here at the nose view.  It's a high nose, the highest of them all in fact, but that's probably an effect of the modesty panel.  Williams claims that the FW35 is "80% new" from last year's car, to which I reply, "Sure.  Why not?"

Very low cut sidepods, designed to handle a new exhaust system... in fact, pretty much the same one Caterham is using.  Oh, and the one the FIA is probably going to rule illegal.  Whoopsie!  One clever thing the team will get away with is "blown wheel nuts."  Near as I can tell, air comes in via the brake ducts, flows through a hollow axle, and out holes flush with the wheel nuts.  This air fills in the vacuum around the center of the tire, which improves the aerodynamics.  Red Bull tried this same trick last year, but theirs was banned because it extended past the wheel nut.  Who knows?  I didn't hear about it!  I love the shape of the nose/front wing struts on this car; very almost art-deco-y. 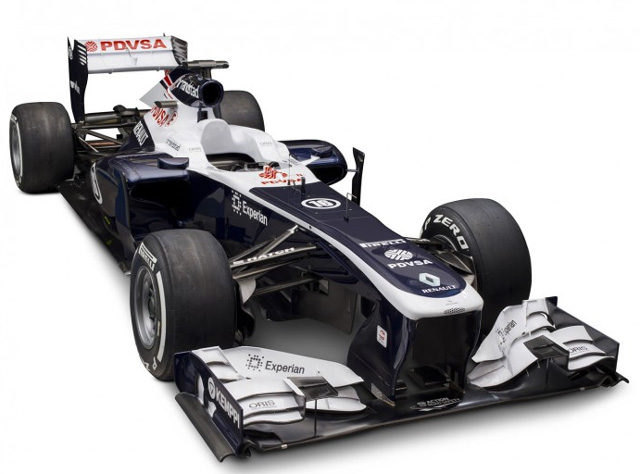 All in all, it's a workmanlike car for a blue-collar team (if anything in F1 can be called "blue-collar").  Will it win?  That's the question.  The team is on the wrong foot by missing the first test session, but if that extra few weeks was needed badly enough for whatever reason, then it had to be done.  I for one hope Williams is on the ascendance again.  We shall see in just a few weeks!

1 I see a fin on the top air scoop. I don't remember seeing anything like that before.

2 That's the official FIA-mandated camera mount, Steven.  All of the cars have one.

3 I'm surprised at how complex the forward spoiler is.  That seems to be the most complex of all the cars you've shown us so far.

4 I can see which driver is which on Williams cars (this year and last, at least) from the side (which is all we ever see during the race, no?) and without trying to see the red pixels instead of the yellow pixels on a two-by-six inch patch of the car at 200 mph, or guess which helmet which guy is wearing this week.

Because they seem to be the only team that cares about the audience more than absolutely required by the regs, they're my midfield team, even if they're slower than Caterham.  Pity they missed the first round of testing, though.

Tom Tjarks - I'm guessing that this is production front spoiler, where the rest were "placeholders".  That being one of the sections they can modify after homologation, why give the other teams your ideas?  Could be wrong, but let's see what gets shown in Melbourne.

5 Wonderduck, I'm not talking about the T-bar on the top. I'm talking about a thin fin about 3 feet by 1 foot by real thin, extending diagonally from the top of the air scoop along its back down to the chassis. The other cars don't have anything like that.

6 Ah, the "shark fin."  A couple of years ago, they were all the rage and ran all the way to the rear wing.  Now they still exist (check out the Ferrari for one similar to the Williams, and the Sauber for a vestigial version) for airflow reasons, but they're hardly the obnoxiously huge ones that we used to see.