Why MilHist Weeps Today was laundry day, and I took my dual bags of dirty stuff to the laundromat near Pond Central instead of doing them here in the provided laundry room.  See, there's currently only one working dryer, and I had a week's worth of clothes and about a dozen towels and various assorted things to wash.  When I go to this particular laundromat, I always take a dense book with me.  Today's selection was the newly acquired US Aircraft Carriers: An Illustrated Design History by Norman Friedman. 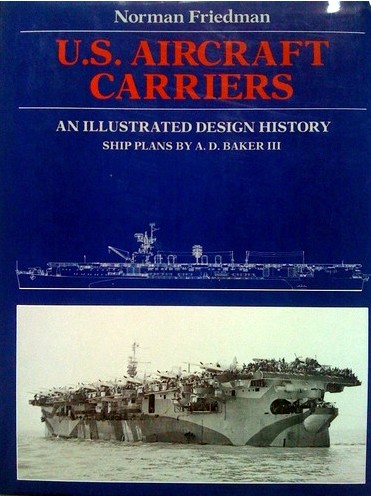 If Japanese Cruisers of the Pacific War is the ultimate book on that particular topic, Friedman's work  is arguably the ultimate on the planning, design, use and upgrading of American carriers.  I've learned a lot from it, and I've only read a couple of chapters disjointedly.  So this was my entertainment whilst the laundry spun and tossed.

Even better, when I got there there was only one other person in the place, and they were carrying their laundry out the other door!  I had a peaceful hour-and-some-minutes ahead of me!

The laundry was in the rinse cycle when a guy, probably in his fifties, came in.  He got his laundry going, then started jabbering at the attendant.  Seemed to be a nice enough guy, just refused to shut up.  Still, he wasn't bothering me so I continued to read, and you probably know where this is going by now.

Yep, after a few minutes, he walked up to me and said "I'm going to be nosy, what are you reading?"  I've had this happen once or twice before at the laundromat, and the usual result when I've showed them whatever book I'm reading has been a bemused "oh," followed by quickly finding some other place to be.  To be fair, it's hard to blame them; mine is an esoteric hobby these days, and it's not like there's much interest in the British Pacific Fleet in WWII anymore.

Not this guy, though.  He immediately began talking about how he visited the USS Lexington a few years ago.  This was interesting, until he said it was originally built as a battleship in 1924.  Ah, they must tell the visitors about the history of the name, because that's really the first carrier named Lexington (CV-2) he's talking about.  I pointed this out to him, and he disagreed; he visited the first one.  I quickly flipped through Friedman's book and found a picture of a  post-war upgraded Essex-class carrier and asked him if that's what his ship looked like?  He replied in the affirmative, angled deck and everything.  I told him he was looking at a picture of CV-16 taken in 1962.  Still he refused to believe it; he went so far as to say it was the book that was wrong.

I smiled at that.  I did a bit of flipping through the book, found a picture of CV-2, and pointed out that that was the ship he was saying he'd visited, and that it was totally impossible that he had walked upon its decks.  He was actually beginning to get angry when he asked why that was.  "Because the first Lexington was sunk during the Battle of the Coral Sea.  It's under about 10000 feet of water to the northeast of Australia."

"Oh."  He then kind of walked away and began talking to the attendant again.

1 What carrier is that on the cover of the book? The bow looks very odd.

2 That's because it's actually the stern of a Casablanca-class escort carrier... I think.  The book doesn't say what the cover illo is.  It IS the stern of an CVE, though.

Heh, so a mention of The British Pacific Fleet made it into a post?  I would note to anyone interested in getting the book that the cover for the book you get is different from what Amazon pictures.

Second the notion about US Aircraft Carriers.  Actually, anything by Norman Friedman is well worth the time.