My Lexington Story A couple of weeks ago, I'm walking up the hill from the main parking lot to the Duck U Bookstore trying to avoid the worst of the slippery spots, when a late-model Chrysler sedan pulled into one of the handicapped spots by the door.  The driver, an elderly woman, began to get out of the car as I changed course to help her if need be.  I glanced at the license plate, noticed the car's color, and began to laugh long and hard.

The woman shot me a nasty look, and I realized she probably thought I was laughing at her, not what I had just noticed.  Unable to speak from laughing so hard, I did what I could: I pointed at the license plate, then waved my hand vaguely towards the rest of the car.  Then she realized that I got the joke... and smiled, saying "Most people don't understand."

Chuckling, I offered her my arm, which she took gratefully.  Walking into the school building the Bookstore is located in, I inquired when her husband had been in the Navy.  "1944; I didn't meet him until 1950, when I was 20."  Her husband passed away a couple of years ago, but she still kept the license plate the way he wanted it.  After we got into the building, I bid her good day... and she thanked me for both my help and for remembering my history.  "He would have talked your ear off, you know.  He could do that," she said with a gleam in her eye.  I replied with "I've got two," which made her laugh.

What made me laugh so much to begin with?  The license plate read "CV 16 USN".  The car was painted dark blue.

CV-16 was better known as USS Lexington, one of the multitude of Essex-class carriers that joined the fleet in the second half of the Pacific War.  She was the only fleet carrier never to have pattern-disrupting camouflage applied to it, wearing instead Measure 21 ("Navy Blue" hull and deck overall) for the entire war.  This paint scheme led the Japanese to give her the nickname "The Blue Ghost." 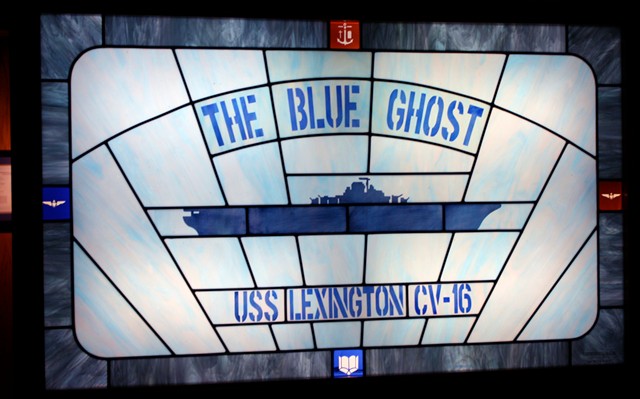 They also claimed to have sunk her four times.  While she did take some damage during the war, it was never particularly serious.  Post-war, she continued to serve until 1991, the last of the Essex-class carriers to be retired.  She's now a museum ship in Corpus Christie, Texas.

CXT figured out the mystery ship, so he gets another post...

1 Except that the image sure looks like it's in camo paint to me, and an image search comes up with USS Essex...

2 The Navy would disagree with your search, David.  Technically, it IS in camo paint, specifically Measure 21.

3 The camo effect occurs because of the shadow from the flight deck falls on the hull.