I Have Joined An Elite Group. Every hobby has a "holy grail."  For us American rubber duck collectors, it's usually the Tolo Duck.  For those who collect baseball cards, it's the American Tobacco Company's T206 Honus Wagner.  Car collectors have different tastes... for one, it'll be a cherry '68 Mustang fastback, but another will only look at Dinos... for whatever reason.  But when you're an amateur military historian of the Pacific War like I claim to be, what's the goal?  Kaigun, Sunburst, Shattered Sword, The First Team, A Glorious Page In Our History... all of these are on The Shelf.  In the comments of that post, CXT mentioned a title I wasn't familiar with.  I looked into it and immediately began salivating: it seemed like it pushed every activation button in my brain at once.  Full of histories and detailed to the extreme, it was exactly what I look for in a mil-hist book.  That it's also considered one of the best references of all time helped a lot, too... until I took a look at the prices.

Holy jumpin' guacamole on a stick, $300???  Yeah, not so much.  However, I kept an eye on the Amazon price listing... every now and again, it'd drop to $200, and I vowed to myself that if I had the cash on hand if the price fell to $150, I'd go for it.  It still felt ridiculous spending that much on a book, but then I realized that college students spend twice that much and more on books all the time.  Eh, whatever, it's only money.  Last Friday, I clicked the link to Amazon, and...

Holy jumpin' frijoles in a hot tub, $150.  I couldn't click on the purchasing link fast enough.  Today, this Holy Grail that has been out of print for at least 10 years and had a list price of $75 in 1997... was delivered unto my hands.

And just what is this paragon of the mil-hist world? 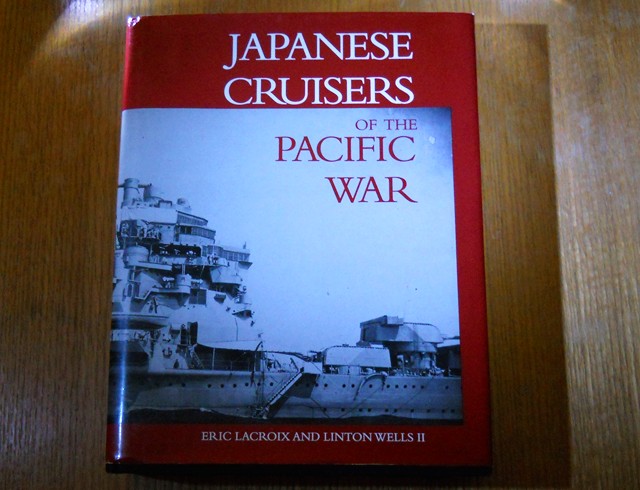 Okay, it's a book, big deal, right?  The picture above does not do it justice, my friends.  Taking over 50 man-years to research, Japanese Cruisers of the Pacific War is the final word in both the technical aspects and the operational histories of every single cruiser that served the IJN in and around the Pacific War.  Need to know exactly what was upgraded and modified differently between the Oi and the Kuma in 1935?  Just open this book.  Are you wondering just how to rebuild a 1938 Type 93 mod 1 torpedo?  The plans are printed on pg 247.  If there's anything you could possibly want to know about the IJN cruiser fleet, this is the book for you. 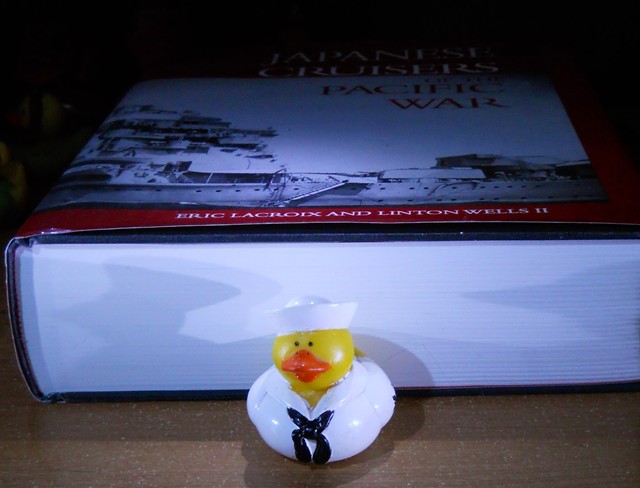 This is not a small book.  It falls into the category of "coffee-table book," because if you screw a set of legs into it, you can use it as a coffee table.  It weighs in at 8.5 pounds and nearly three inches thick, for heaven's sake.  It's a danger to young children and small animals. 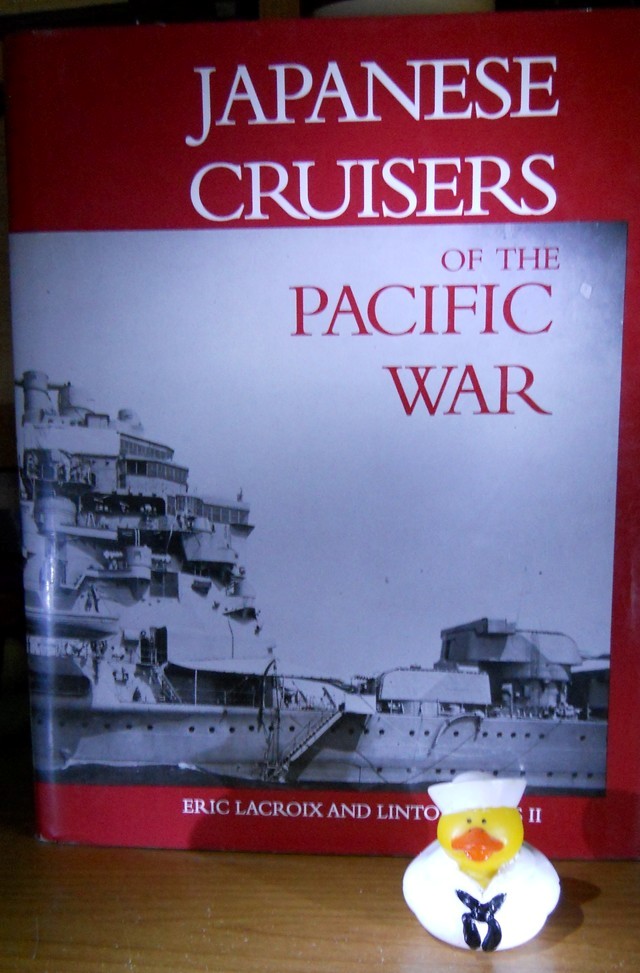 It's huge, is what I'm saying, but you would expect it to be.  It's a great thing, and I'm proud to add it to the collection... and join the ranks of the elite and/or the desperately geeky.  If you feel a need to join the few, the proud, the owners of Japanese Cruisers of the Pacific War, there's still a copy available at Amazon for $150.

1 I did NOT need to know that.  That looks like an awesome book.

You will probably want to kill me, but when I got Japanese Cruisers of the Pacific War, I paid less than $80 for it new.  Falling asleep while reading it is not recommended, since it will probably hamper blood flow in whatever extremity it lands on after you doze off.

It does look great lined up next to my copy of Norman Friedman's US Cruisers.

3 ...which is going for more than double this one.  Used.  I would enjoy having the whole series, but owning the US Carrier one is probably my next goal.

David, it is awesome indeed.  It's dark in Pond Central right now, except for a golden light being cast by my copy.  Also, a decent sized cut I had on my left wing (occupational hazard when one works with boxcutters on a regular basis) spontaneously healed when I turned to the first page.  My voice dropped an octave, too.

4 Please use the link button instead of the raw URL.  Raw URLs make Wonderduck cry.

It's a danger to young children and small animals.

Don't let your hobby kill you.

So that makes Wonderduck....A ROBOT!

8 That's where the "wonder" comes in!

Speaking of 'wonder'...I was curious enough about exactly how much it cost me, to locate the invoice for my copy of Japanese Cruisers of the Pacific War and...I paid an amount below $60 for a new copy.  Granted that was a better part of a decade ago...

Related to Steve's post about his purchase - the best secondhand mil-hist book I ever purchased was a copy of Martin Middlebrook's Convoy, which I had been looking for everywhere before I got my copy.

10 I was able to resist the siren call of the "buy" button on that one for about...4 hours.  It arrived today, and I've just spent a happy four hours in my reading chair putting a dent in my lap.  Thanks for the heads up!  Now my copies of Cruisers and Battleships of the U.S. Navy in World War II look like children's books.  Are there any references even close to this one that you'd recommend for the U.S. or British fleets?

11 Actually, yes... Norman Friedman "US (ship type): An Illustrated Design History" series is in the same vein, though nowhere near as good.  This is not a knock on Friedman's books; when you're being compared to Japanese Cruisers of the Pacific War, you're expected to come up short.  Here's the link to the Carriers entry, but there's also Destroyers, Cruisers, Battleships, Submarines and Amphibious Ships.  I've never read these books, but I've read other Friedmans, and they've been uniformly excellent.

Another series of books that I've not read but have heard good things about is the "Battleships" books by Dulin and Garzke.  There are three: Axis & Neutrals, Allied, and United States.  Here's the link to the Allied book.

I have been working backwards in collecting Norman Friedman's references.  As Wonderduck said, while each of his books are not as detailed as Japanese Cruisers, they are among the definitive sources on their subject (Friedman is a consultant to the Defense Department, so whatever is in his book is as close to Gospel as you can get unclassified.).  He also has written books about the Royal Navy too, as well as a wide range of other subjects (His book on Operation Desert Storm, Desert Victory, has some rather amazing info not generally known even now.)

Friedman also has gone back and revised some of his books - the current version of US Destroyers is the 2003 edition, with extra info.  I had to wait until Amazon started carrying the book again before I got it.

Garzke and Dulin's three books about US, Axis, and Allied battleships are, like Friedman's works, the definitive source on those topics short of a narrow subject reference.  They have revised the volume about US battleships, but the Axis and Allied volumes have not been updated IIRC.  Oddly enough, while it is possible to easily acquire a new copy of the volumes on US and Axis battleships, the Allied Battleships is out of print with no new printing run in sight.  That is a pity since it had the most interesting and varied subject matter of the three (The proposed Dutch battlecruisers was my favorite part of the book, which also covered the Sovetsky Soyuz class.).