Wonderduck Pays Courtesy A Call You may remember back about a week or so ago, I mentioned in a comment to reader Will that the Duckford Airport was home to a warbird restoration shop.  It turns out that isn't quite the case, as I got the "restoration" part incorrect.  Instead, Courtesy Aircraft is a seller of classic warbirds and modern planes as well... and I was exchanging e-mails with them.  After three back-and-forths, I was told I could stop in any time during business hours to look around.  How cool is that? 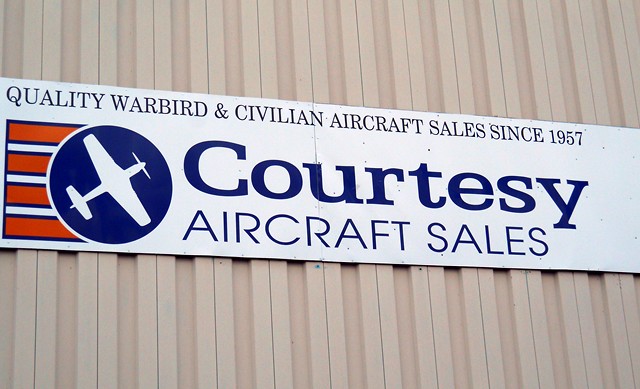 It was a sunny afternoon as I pulled into the small parking lot next to Courtesy's hangar at the Airport.  I met Darcy, Courtesy's Marketing Director, and learned what I had feared: they were actually quite busy.  Turns out they had a few customers in town after their appearance at EAA AirVenture, which is good!  It did mean, however, that they couldn't spare anybody to escort me around the flightline.  I could stick around the hangar, I just couldn't go onto the taxiway... security, y'know.  I knew, and approved, even though it meant I couldn't get any closer than this to some juicy-looking aircraft: 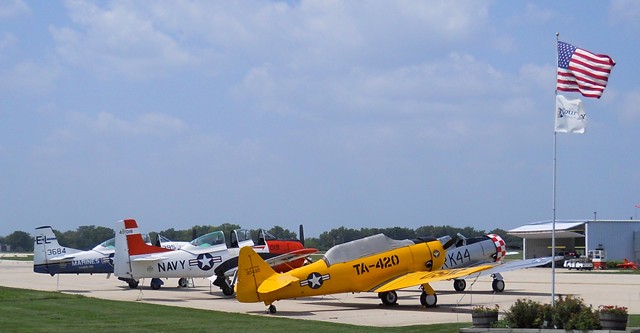 Two T-6 Texans, just ahead of a pair of T-28 Trojans.  I gather that the high-visibility yellow-painted T-6 won a restoration award at Oshkosh sometime recently, in fact.  Still, the limitation didn't mean that there wasn't anything I could get close to... 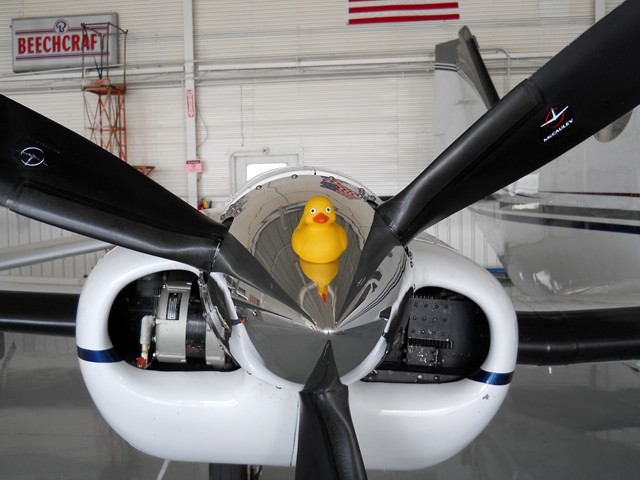 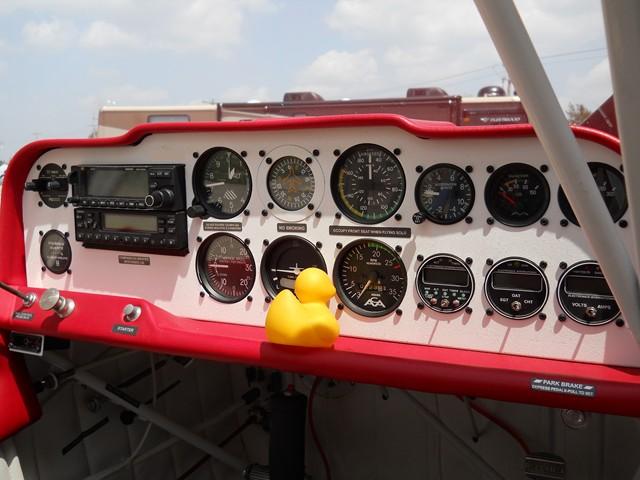 So many gauges... how do you humans do it?

And there were some planes that one didn't need to get close to to appreciate:

I mean, everybody knows that the C-47/DC-3 was one of, and arguably THE, great plane of WWII, and that there are still thousands of the breed still flying... but how often do you actually get to see one?  This one started its career 65 years ago with the Army Air Force, was once owned by the EAA itself, and until 2003 flew as a period-specific sightseeing plane in Alaska.  Just a gorgeous piece of work, this, and enough to make the trip to the Airport worth it on its own.

As I admired the Gooney Bird, a nickname the DC-3 doesn't deserve, from afar, Mark Clark, the President of Courtesy Aircraft himself, introduced himself and began to bring some aircraft into the hangar for the weekend: a beautiful pair of AT-6s. 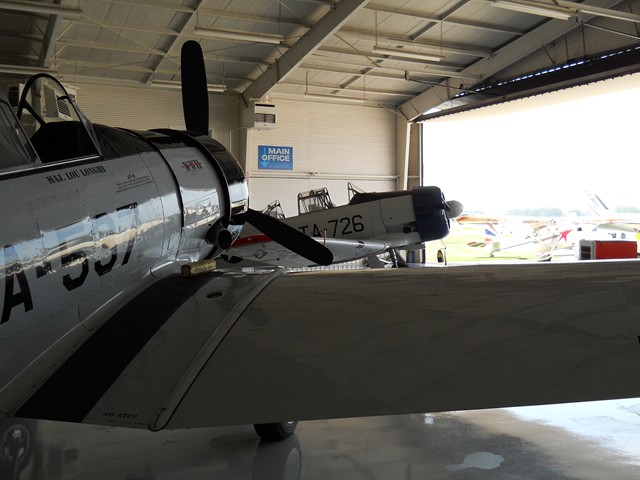 It's hard to believe that these planes trained pilots during WWII, they're so clean and fresh-looking, but indeed they did.  The near plane was built in 1943 as a Harvard Mk III for the Royal Navy's Fleet Air Arm, the other is a T-6G, which is an older marque of Texan that was rebuilt to more modern levels sometime between 1949 and 1953, according to Wikipedia. 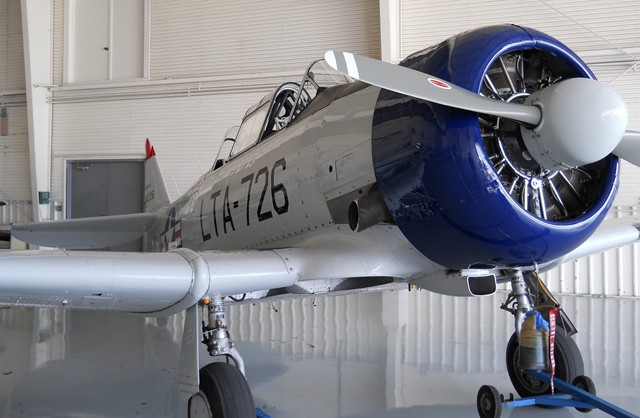 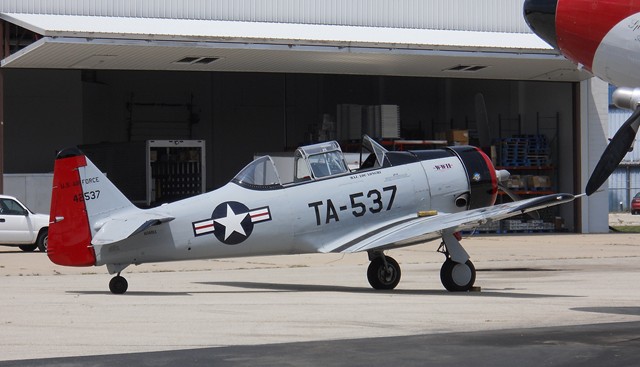 I mean... wow.  As an aside, it's easy to see why the T-6 was used to simulate Japanese Zeros in the movie Tora! Tora! Tora!, there's a distinct resemblance.  Oh, it's not as graceful looking, to be sure, but the shape is correct... particularly the tail. 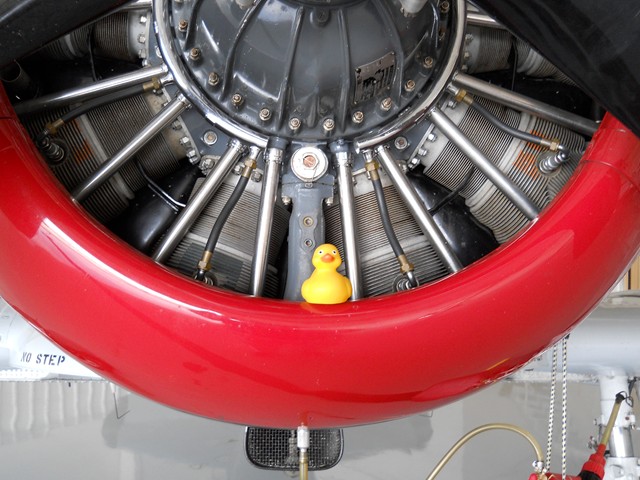 I could admire the radial engine in these things for hours... they may as well be sculpture, if they weren't 600hp beasts. 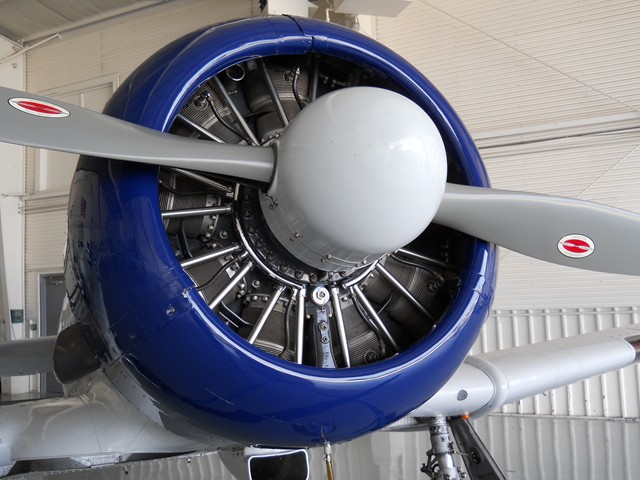 To be exact, the nine-cylinder R-1340, the first of the engines best known as the Wasp.  The famed Double Wasp, which powered such planes as the Corsair and Hellcat, was (when you get right down to it) two Wasps bolted front-to-back.  Yes, there was a lot more to it than that, of course, but that was the basic idea. 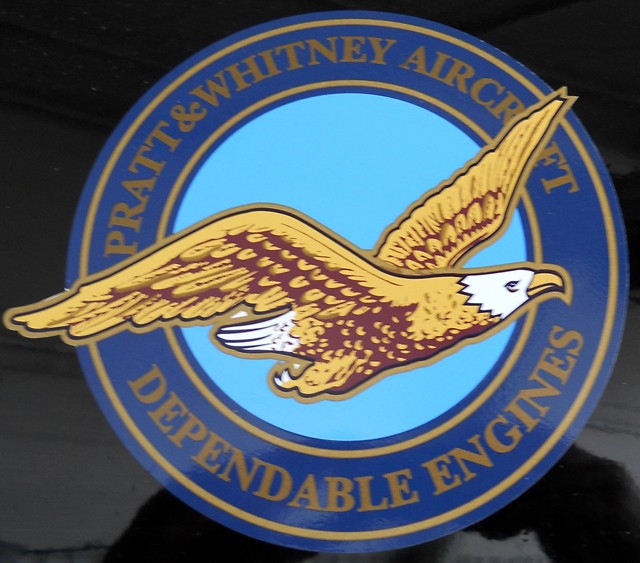 "Dependable Engines" indeed if they're still in use over 60 years later. 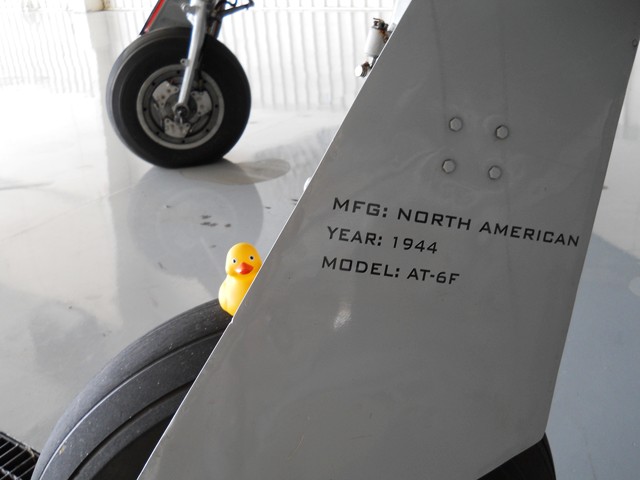 While ducks may not need planes to fly, we still find them fascinating... particularly the landing gear. 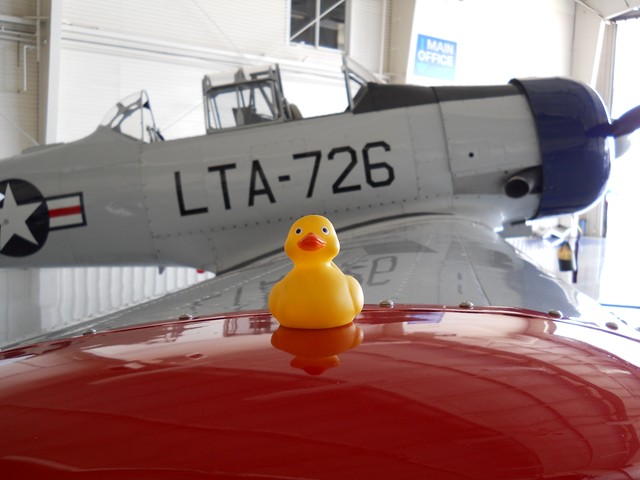 But let's face it, not having to flap is easier on the wings. 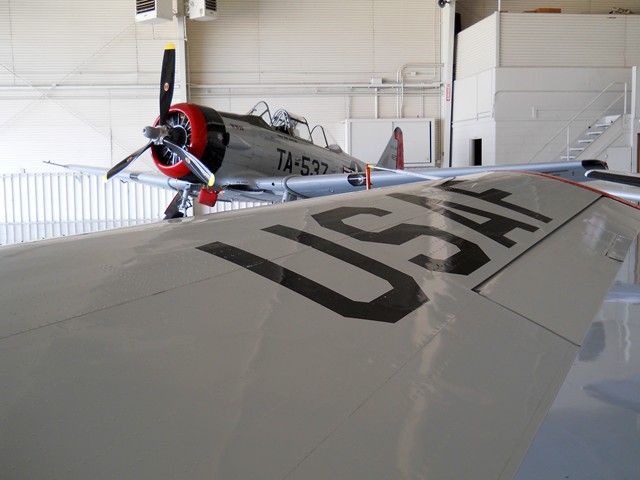 Eventually, however, I needed to leave as I didn't want to impose on the good folks at Courtesy any more than I already had.  After all, they are an operating business, though everybody there was the height of... well, the height of courtesy (no pun intended). 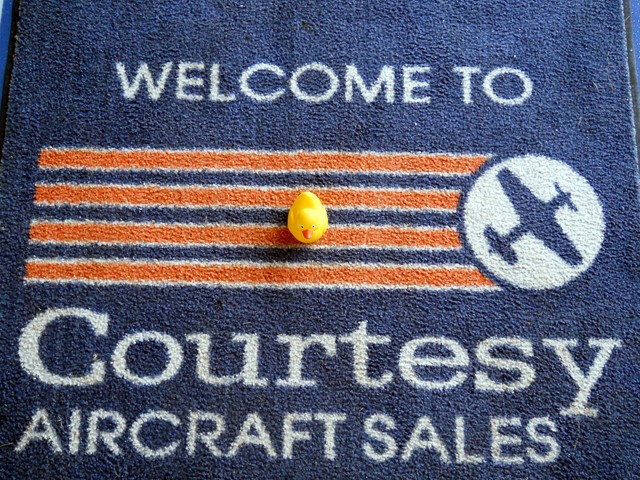 They're good folks.  I appreciated the chance to visit and geek out over their classic planes, without any hassle at all.  Makes me wish I knew how to fly, though I suspect that the FAA would have problems with having duck as a pilot.  Also makes me wish I could afford a warbird, but that's even less likely.

As I got back into The DuckMobile, I couldn't resist one more shot: 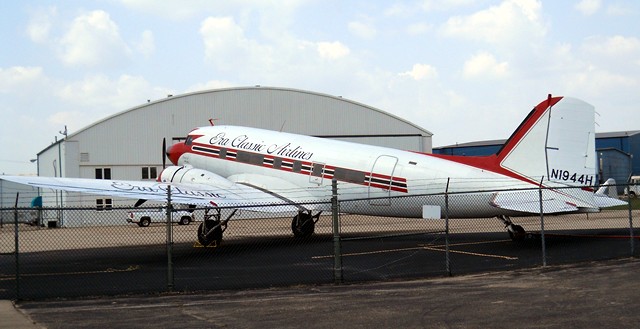 1 I've read a lot of stories about pilots who saw a new model plane, and said something to the effect of "If it looks fast, it'll be fast." That ain't necessarily true; the Brewster Buffalo actually had clean lines, but it wasn't a good aircraft.

Anyway, though, when I see a DC-3, I can't help but admirre the clean shape of the fusilage. Or the way the engine cowlings merge into the wing. I do think the DC-3 is one of the prettiest planes of that era, not to mention being the best single aircraft design of all time. (Them's my opinion.)

Is there any other aircraft that's been in operational use for 80 years? (well, the B-52 is getting close to that...)

It is nice to see a DC-3 that runs, and likely runs on a semi-regular basis, as well as being in such good shape.

The Henry Ford Museum has a DC-3 (it was right next to Lindbergh's <i>Spirit of St. Louis</i>, last time I visited...more than a decade ago). But that one likely hasn't left the ground (under its own power) in years.

3 That question intrigued me, so I went looking for an answer.

The Boeing 727 is nearing 50 years in operation, and the Piper Cherokee is past that.  The Beechcraft Bonanza began to be built in 1947 and is still being made today.  Cessna began construction of the 172 in 1956.

The Bonanza, by virtue of the fact that it has already gone 63 years in production, will probably hit 80 years easy.  The other two civilian planes, too.  The 727 probably won't, at least as far as fleet service goes (there'll always be some third-world airline that has a frankenplane 727 running somewhere).

But that's about all I could find: rare company indeed.

5 Very cool; I really do need to visit the aircraft museum right next to my work...

6 En-Vee, amigo.  I trust you'll visit again when they aren't so busy and bring a report of that visit also...

7 I worked at the Atlanta airport in the mid 70's loading cargo for Kennworthy air. They had a mixed bag of DC-3,DC-6 and C-46s they loaded for other freight services. The most unusual was the Carvair a converted DC-4 for passengers and or cars,it looked like a small 747 with props. Another rather interesting aircraft was the CL-44,a large and somewhat slick turboprop. The one aircraft I most wanted to see up close was the Connie but one never arrive when I was there.