AirFest 2010: Eagles, Spooks, Warthogs and Hornets, Oh My! I had an ulterior motive for purchasing my new digital camera when I did.  Y'see, I knew that this was the weekend for the Chicago-Duckford International Airport's annual airshow, named AirFest.  And I planned, as I always have before, to stand in the field behind Pond Central and take pictures of the USAF Thunderbirds, this year's featured performers, as they went by overhead.

See, Pond Central is right at the edge of their performance cylinder, about two miles or so from the airport, so when they extend out from the runway they tend to fly right over my living room... literally.  However, they're usually the only performers who get that close, so on AirFest weekend I make a small change to my routine.  Instead of going to my usual grocery store, I head to a smaller, dingier place that has the advantage of being about a half-mile from the airport.  I've not usually gotten good pictures of the "supporting acts" from this location, but there's always a first time, right?  When I get to the store, there's no sound at all coming from the skies, so I head inside and do my shopping.  $70 later (and I forgot to get batteries, darnit!) I emerge from the Hilander and push my cart back to the DuckMobile.  As I unlock the Official Car of The Pond, I hear a strange, almost spooky, howling moan coming from the direction of the airport and getting louder.  Just as I look up, one hand unlocking the car door and the other frantically trying to dig my camera out of my pocket, the first of the jet performers, the F-15E of the US Air Force's Strike Eagle Demo Team screamed right overhead and low, rolled hard left and dashed away for what I assume was to be a high-speed "sneak" pass of the runway.  I quickly threw my comestibles into the back seat, moved my car about 100 feet west (no cars parking there), and waited for the moaning howl to come back.  And then it did. 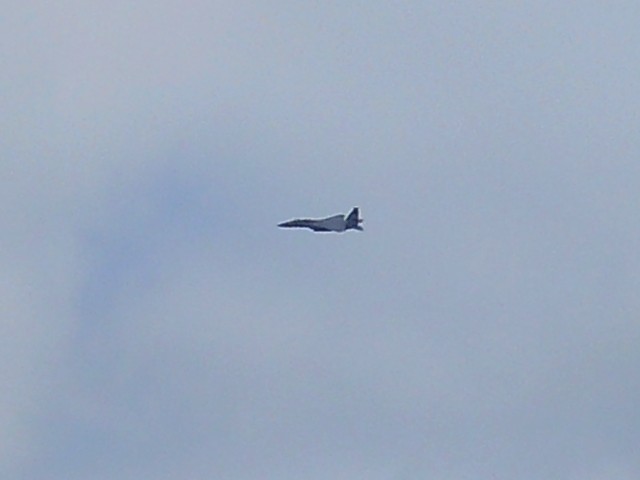 He played around for a little bit, including one absolutely brilliant zoom for the skies that I couldn't get a picture of because the sun was too bright, then disappeared.  Content that I got at least one good picture, I got back into the DuckMobile... and then scrambled out again, because I heard a rumbling roar coming from behind me. 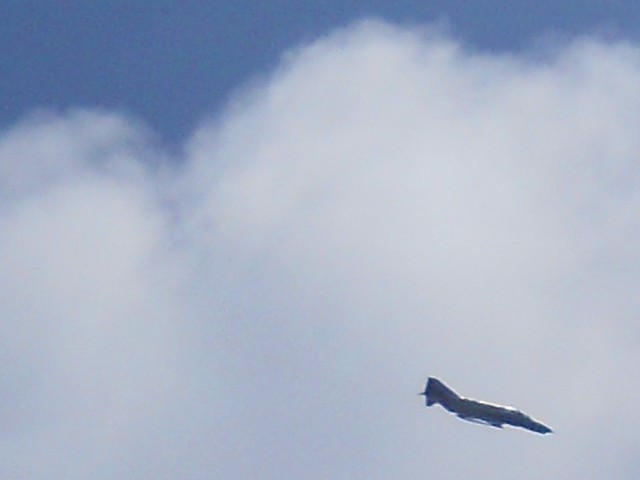 I've never seen a F-4 Phantom II in the flesh before!  This one is from the Air Force's Air Combat Command "Heritage Flight".  A triumph of thrust over aerodynamics, the Phantom was called a number of derogatory names over the years, such as "Double Ugly", "Flying Brick" and "Iron Sled."  The Luftwaffe gave it the best nicknames, though: Luftverteidigungsdiesel ("Air Defense Diesel") and Eisenschwein ("Iron Pig").  Strangely though, I found it to be much more graceful in flight than the Strike Eagle.

And then something happened that blew my mind. 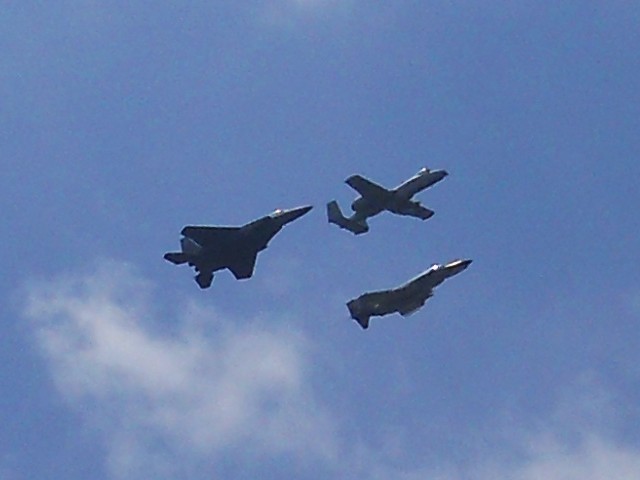 Turns out the F-15E wasn't the first jet performer of the day, the A-10 Thunderbolt II from the A-10 West Demo Team had been up earlier, and they formed up for a pass of the airfield.  Oh, baby! 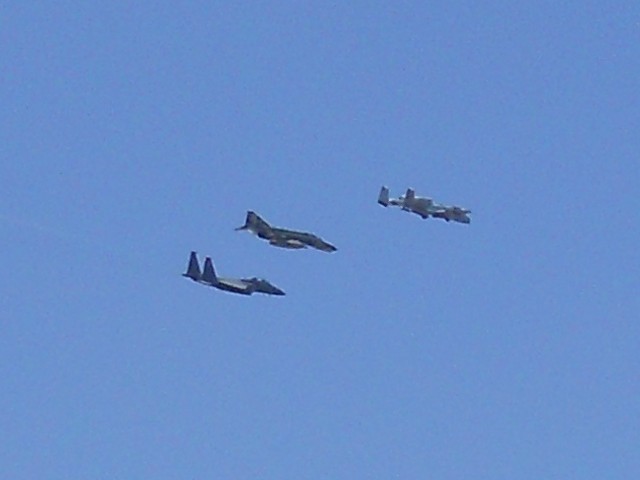 As they flew off, I got back in my car and drove back to Pond Central.  On the way there, I thought to myself, waitaminnit!  I don't have to be out in the field behind the apartment, do I?  I can find a better spot for the T-Birds!

After unloading the car, using the loo and grabbing a Gatorade from the fridge, I checked the clock... 3pm.  I had a half-hour to get back to the vicinity of the Airport before the Thunderbirds were scheduled, no problem.  But where to go?  I realized there's a McDonald's on a frontage road just outside of Duckford proper... that is about a half-mile from the airport.  Dingdingdingdingding!  We have a winner!  As I drove there though, the world ended.

Or, at least, that's what it sounded like.  I had forgotten about one of the performers. 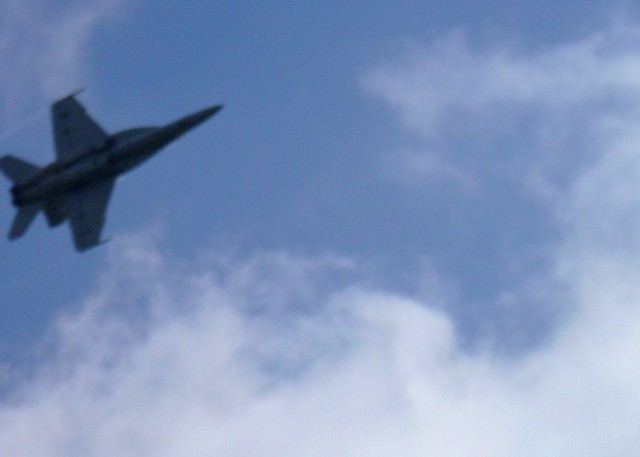 That's the best picture I could get of the US Navy's F/A-18F Super Hornet from VFA-122's Demo Team.  It was, far and away, the loudest of the planes I saw today.  Actually, during the pass where I snapped that picture, I felt those twin engines rumbling in my chest like they were trying to kick my lungs out.  It was in a frickin' hurry to get where-ever it was trying to be... every other picture I took turned out blurred or blocked by a telephone pole (I pulled into a gas station to watch it).  Then, while I was standing there trying to find the thing through all the trees nearby, it zipped by overhead.  As it streaked off towards the airport, my thought process went something like this:

Look, I know the FAA takes a dim view of planes breaking the sound barrier over populated areas, and for good reason.  But I'll be damned if this naval aviator didn't do it.  I've heard sonic booms before (on video), and that KABLAAAAAAAAAAMMM!!! sounded exactly like those... except a hundred times louder.  Coolest darn thing ever!

I got back into the car and drove the remaining distance to my selected position... and found that about 100 people had the same idea.  But there was a  frontage road on the other side of the highway from the McDonald's that I had forgotten about, and it was even better positioned!  I found a spot to park the DuckMobile, walked about 30 yards and realized that I had struck gold: from where I was standing, I could actually see the airport, though mostly blocked by a small business park.  I jogged my memory and realized that I was about a mile or so from the east end of the main runway.  Jiminy Christmas, the T-Birds would be passing right over my head!

1 Sounds like you had a good show! Do you mean you've never seen a flying F-4 or never seen an F-4 at all? I thought they were pretty common in aviation museums. The only time I've heard a sonic boom from an aircraft in the flesh was when I watched one of the shuttles come in for a landing at KSC. They've got a distinctive double boom without any engine sounds... The old IMAX movie featuring the shuttle (just looked it up: The Dream Is Alive) has a good recording of it, though you'll need the monstrous subwoofers of a real IMAX theatre to reproduce them well, but still recognizable on my laserdisc edition.

2 Kayle, I've never seen a Phantom II in the flesh, period.  They are common at aviation museums, but the few that I've been to didn't have one.

3 I LOVE the Heritage Flights, one of the best PR ideas the USAF has had. I had the distinct pleasure of seeing two shows in '08: Wings Over Pittsburgh had an F-16 and an F-22 (it was supposed to be a P-47 and the Raptor, but bad weather delayed the Jug), but Oceana was a bit better...

And this year we're (supposed to be) getting the FA.2 Harrier!

4 We regularly get Hornets, Super Hornets, and Harriers flying in and out of Mesa-Gateway about a mile from my house. My parents live under the southeast end of the runway and every once in a while the Harrier jocks get frisky at treetop level after takeoff.

Now that I think about it, we regularly get C-17s, F-5s in aggressor paint, KC-135s doing touch-and-goes, and the occasional A-4 (there's some kind of commercial training outfit that uses them at the airport). There's are a F-104 and T-33 parked in a hangar as well. I've seen the 104 rolled out like they were checking the engine, but that's about it. I'd love to see it fly overhead one of these days.

5 Will, not to play one-upsmanship with you, but O'Hare airport in Chicago has an ANG base on the premises.  Of course, it's very hard to train in the airspace of Chicago, so there's an auxiliary base here in Duckford.  It's a common sight to see KC-135s and Hercs milling around the airspace of the city.

What isn't common, but does happen every now and again, is the sight of a MiG-17.  Turns out that there's a well-respected warbird restoration shop here in town on the far side of the airport from Pond Central, and one of the things they did recently (I assume for a collector) was a MiG-17.  They appear to have taken their aircraft to Oshkosh this year, though.

6 Nice pics, havent done any airshows this year, too damn busy most weekends (last sunday was the war and peace show too)