What Is Geek Canon? 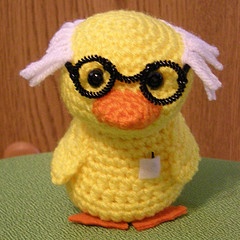 In the comments for "Watching The Classics", Avatar relates a story:

You know, I hadn't seen that last one until quite recently. My D&D group was boggled that I wasn't following their "spear and magic hellllllmet!" jokes...That's actually a good question. What is the geek canon? What are the things which I need to have seen, read, heard, etc. in order to communicate with my fellow geeks?

Steven suggests #1 should be Monty Python and the Holy Grail.  A fine choice... and here's a few more, in no particular order:

The Hitchhikers' Guide to the Galaxy.  "Do you know where your towel is?"
Star Wars.  "May The Force Be With You."
Spaceballs.  "May the Schwartz Be With You."
Lord Of The Rings, either the books or the movies.  "One Ring to rule them all, One Ring to find them, One Ring to bring them all, and in the darkness bind them."
Starship Troopers, the book, though most Heinlein novels could be here.  The first appearance of power armor?  Yeah, that's a geek thing...
Blade Runner.  "I've seen things you people wouldn't believe.  Attack ships on fire off the shoulder of Orion.  I watched C-Beams glitter in the dark near the Tannhauser Gate.  All those moments will be lost in time, like tears in the rain... Time to die."
Snow Crash.  Hiro Protagonist?  The Deliverator?  Raven?  "Poor Impulse Control"?  The Metaverse, which may as well be our next entry...
The Matrix.  "Take the red pill."

It's obvious I have a SF background... but there's gotta be a gazillion others.  Leave your Essential Geek Canon ideas in the comments!

UPDATE: Avatar has his own (soon to be multi-?)post on Geek Canon, too.

"There IS no third planet!"

4 I don't think my friends and I could make it through the day without quotes from The Princess Bride. Other than that, my movie canon would have to include Aliens, A Fish Called Wanda, They Live, Big Trouble in Little China, and Remo Williams: The Adventure Begins.

And Python. Lots of Python.

5 So, I push the post button, and immediately realize this isn't about the works that make up a well-rounded geek -- it's about the the stuff geeks bring up in conversation over and over. The geek memes, if you will.

So, please throw away more than half my post.

That said, yeah, I think most geeks should have some contact with all the things I mentioned.

6 Well, we can all do "obscure reference-fu" until we go blue in the face. I'm cracking up often enough on my own with no hope of explaining why I just found something so funny, and even the normal people I work with are fairly geeky ("I'm not a geek!" "Diane, you own a life-size standee of Jean-Luc Picard." "Doesn't everyone?")

The idea of the canon, though, is that there should be some body of geekdom that the geek is expected to have encountered - not just "that's on my get-around-to-it list", but the things which you're expected to be familiar with, the things where if you say "I never read that" or "I've never seen that", other geeks look at you like you're some kind of mundane.

Star Wars is part of the geek canon. So is Star Trek - not necessarily any individual bits of it, but you have to have seen some Trek somewhere.

Number one is indeed Monty Python's Quest for the Holy Grail. Hitchhiker's Guide is up there too, but a bit lower. Princess Bride, sure.

Books are harder - you really quickly set a fairly high intellectual bar for geekdom if you throw too many of them in.

Damn. This needs to be a whole series of posts, not just a few comments. Guess I know what I'm posting about this week, in between finishing off Lucky Star and Persona 3...

7 Ok, so I'll admit, I worked Renaissance Faires for about a decade, so the Python/Princess Bride references are everyday usage for me (And then, they had to eat the minstrels. And there was much rejoicing!). I had a friend who was actually an Anglican minister. He built a replica "holy hand grenade" cause he thought that bit was the funniest he'd ever heard. I'll add on another genre now... hasn't anyone seen Army of Darkness? "Gimme some sugar baby!"

I find myself thinking that "The Terminator" should be on the list, simply because of "I'll be back." Besides which, it's Arnold. But I'm not so sure it really rises to the level of canon.

9 Is Doctor Who necessary canon?  It certainly seemed like it was when I went to school, although I managed to avoid watching any until... drum roll... last fall.  Some Tom Baker-era episodes, and boy howdy did I hate them.

Even though I managed to avoid Doctor Who until early middle-age, I still absorbed way too damn much of the details of that British mess through osmosis & daily contact - I had a roommate for five years who wore a Tom Baker hat & muffler ensemble whenever it got cold out.

Who is necessary to the extent that you need to know that there's more than one of them, and you need to recognize a Tardis.

Who is necessary to the extent that you need to know that there's more than one of them, and you need to recognize a Tardis.

Well golly...I'm not sure who that would be.

12 The geek memes are works that a well rounded geek should know.  Or half of what a well-rounded geek should know, the half with a sense of humor.  I'd put Terry Pratchett somewhere on the list as well, as I've seen recent SF works by Charles Stross and Vernor Vinge that have substantial Pratchett in-jokes.  And, of course, Pratchett's works contain in-jokes that rely on knowledge of other items of cultural canon, from Dracula to RoboCop.

An important reason canon is canon is because other works make references to it.  Part of the reason we study Homer and Shakespeare is because so much else references their works.  It's hard to read Pratchett's Wyrd Sisters without knowing Macbeth.

For the more serious half of the Necessary Geek Knowledge, the books at any rate, I'd expect a geek to at least know who Asimov, Clarke, and Heinlein are and something accurate about their major works.  The exact books can be left as an exercise for the reader, but it's important to note what parts of their works are referred to over and over.  For example, how much of how we view AIs in SF is colored directly or indirectly by the Three Laws of Robotics?

Mike, regarding Army of Darkness, I'd go more with "This... is my boomstick!" and "Honey, you got reaaaaal ugly."

14 Has Ph.Duck seen Holy Grail yet?

Here's a curious suggestion: a true geek will have read Alice in Wonderland and Through the Looking Glass.

"The Red Queen's race" alone is more than enough to justify that, but there are a lot of other reasons.

16 Steven, I'm sure he hasn't.  I'm not sure he'd like it much... but I've been horribly wrong about his tastes in the past, too, so maybe I SHOULD inflict it upon him...

17 For those of us non-youngsters, LPs used to be a factor.  And Firesign Theater's works certainly warped many geeks and such with whom I've worked.  I would hate to have to recall how many times someone uttered a line from same only to end up with a ping-pong exchange with others, none of whom knew the others had partaken of Firesign until that point.

18 Generally I agree that book references set the bar pretty high -- but we *can't* leave out the Three Laws of Robotics.

And what geek doesn't recognize a quick utterance of "Bedebedebede" from Buck Rogers?

19 Oh, and even geeks who never saw the movie know that "There can be only One"

20 Certain elements of The Twilight Zone -- such as the goblin on the airplane wing, and the story "Eye of the Beholder" (and, yes, "It's a cook book!") -- are certainly sci-fi canon, if not "geek" canon.

21 How about Tom Lehrer?

How about Spivak's Calculus?