The Ships of Strike Witches ep11 In this episode, the Powers That Be have decided that it's time to go on full attack with (mostly) conventional forces against the Neuroi Hive that's sitting over Romagna.  The 501st will be reduced to escorting the naval vessels involved.  Well, we all know that won't last for long, but let's take a look at the ship list the show provides us with, because it's a doozy! 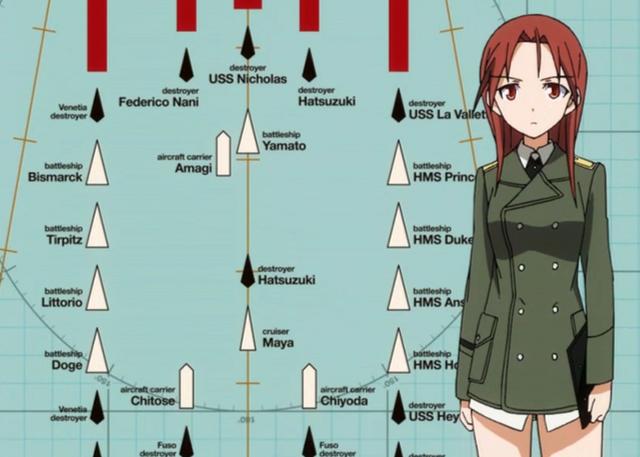 The first thing that leaped out at me was that it appears that I got my aircraft carriers wrong.  Allegedly.  The Chitose and Chiyoda would have been lousy choices to escort the Yamato halfway around the world.  They were poor carriers, unsurprising since they were actually converted seaplane tenders.  They weren't particularly fast, nor were they long-legged.  Meh, so I'm wrong, because that's what's up there on the screen.

Of course, there's also the Amagi.  A member of the Unryu class, which was based off the Hiryu, in real life the Amagi's career was pretty much limited to the Inland Sea before it was sunk in harbor at Kure Naval Base by USN planes.  It capsized to port, with its starboard-side island nearly parallel to the water.  So how exactly did the producers of Strike Witches miss this: 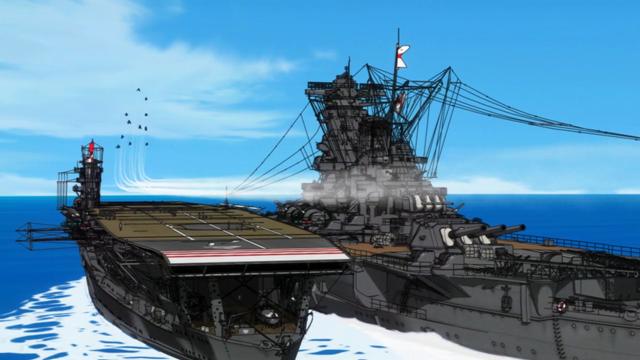 Yeah, the island is on the port side.  Whoopsie.  I'd write it off to alternate-universe, yadda yadda, but they've been so good about how the ships looked up until now. 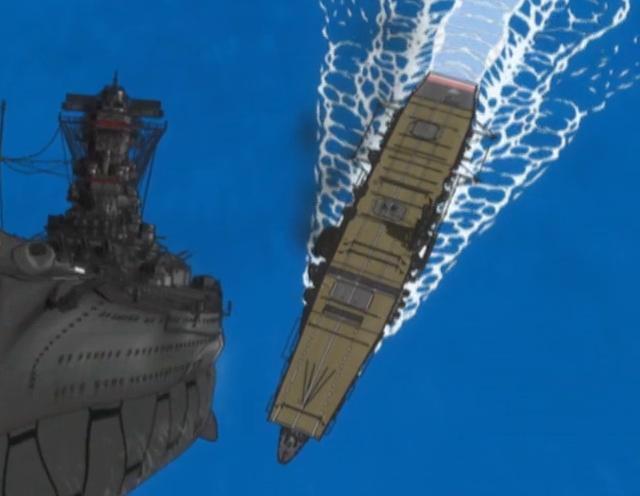 Ignore the flying battleship, the Amagi's island is on the bloody wrong side!  Whoopsie.

There's another big mistake in the order-of-battle in the first picture.  The Amagi's plane guard destroyer is the Hatsuzuki, which in real life was sunk at the Battle of Leyte Gulf.  That's fine and all, but please note that the Hatsuzuki is also shown as being off the Yamato's starboard bow.  Whoopsie again.  The Imperial Japanese Navy built some fantastic destroyers in WWII, but none of them were good enough to be two places at once.

The USS Nicholas (DD-449) was commissioned on June 4th, 1942, and had a busy war.  She was decommissioned in 1970.  The USS La Vallette (DD-448) was put in service August 12th, 1942.  She took an aerial torpedo off Guadalcanal, then suffered crippling damage from a mine in February 1945.  She was retired shortly after the end of the war.  She stayed in the reserve fleet until 1974, when she was sold to Peru as spare parts.  I'm guessing the "USS HEY" to starboard of the Chiyoda, is the Heywood L Edwards (DD-663), named after the captain of the USS Reuben James, the first US ship sunk in WWII.  The Edwards was commissioned January 1944 and was transferred to the Japanese Naval Self-Defense Force in 1959 as the Ariake.

The doesn't appear to be a destroyer named the Federico Nani in the Regia Marina during WWII, though there was a submarine called the Nani.  I can find no information regarding who Mr Nani was, other than a brief note that he commanded a fleet in defense of Venice against the Ottoman Turks at the Battle of Lepanto in 1571.  It'd make sense that a ship would be named for him, but I'll be darned if I can find one.

I'll ignore most of the battleships.  They're easy to identify for the most part, and easy to find information on.  I will mention one, though.  In the lower-right, there's a "HMS HO" listed, and I thought that the producers had made another mistake.  After all, the HMS Hood was a battlecruiser, not a battleship.  Turns out that the last of the King George V-class was the HMS Howe, which was also the last British battleship built that served in WWII (the Vanguard was completed after the war ended).  In fact, four of the five KGV's are in the order-of-battle, and are in line in the order they were completed (only the namesake isn't listed).

I still don't think that those were the Chitose and Chiyoda, though.

1 Seeing Prince of Wales and Bismark in the same formation is really wierd, IMO. Recon your right that  is Howe instead of Hood, just as well as having the Hood in the formation too would completely overload my wierdness sensor

2 I didn't go into it in that great of detail. I was just turned off by the picture of Amagi and Yamato sailing that close together. They didn't do that; it was much too dangerous. The only time ships would have been that close would have been during rescue operations, and it would be cruisers or destroyers doing it.

3 And the flying battleship didn't make you blink?

Think of it as refueling operations, Steven, though the IJN did it bow-to-stern as opposed to the USN's side-by-side.

4 The flying battleship didn't even make me blink, because of course I expect that in this anime.  The angle of attack though.. I sure hope they got the crew off before it took off, or they're going to have lots of injuries in there!

And of course the girl giving an earnest serious briefing in her briefs.  Only anime can do that.

5 That is not the Unryu class Amagi that is the Akagi class Amagi, a sister of Akagi that was irreparably damaged in the 1923 Kanto earthquake. Look at Akagi and you will notice that the pictured ship is identical including the port side island.

6 Your necromancy is unwelcome.  Now, having said that, allow me to quote from this very post: "I'd write it off to alternate-universe, yadda yadda, but they've been so good about how the ships looked up until now."

I don't agree with you, nobody.  The series just hasn't done fantasy ships; you may be right, but there's no precedent for it in the show.

7 Nobody, I deleted your comment for a few reasons.

One, I refuse to be insulted by someone hiding behind a name like "nobody."

Two, I don't claim to be any sort of expert on anything... I do this because I enjoy it.  Having said that, every single reference book I have here at Pond Central says that the Unryu-class of carriers was based on the Hiryu, not the Soryu.  I'll trust them over you.

Three, your supercilious, arrogant and, ohbytheway incorrect, comment did a fine job of annoying me.  Go away.

Comments on this thread are closed.