The Muroc Maru Over the years, practice targets have taken many forms.  Watermelons, poles stuck in the ground, human silhouettes, bulls-eyes, "black dots," on and on.  One of the most... unique... was finished in 1943. 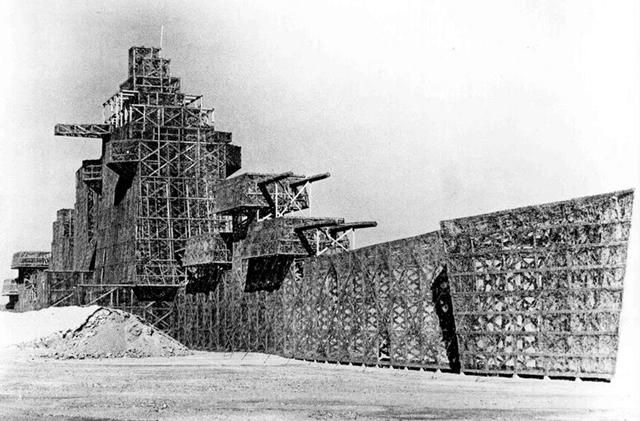 Army Air Forces Temporary Building (Target) T-799, dubbed the "Muroc Maru", was constructed on the grounds of Muroc AAF Base for the then princely sum of $35000.  Built out of 4x4 lumber and chicken wire, then covered with tar paper and liberally coated with ground-up chicken feathers, it was the spitting image of an Imperial Japanese Navy Takao-class heavy cruiser.  Sand berms were added to give the appearance of a wake. 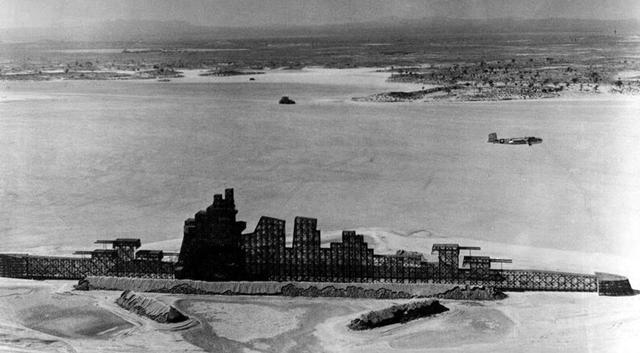 Probably the largest single-structure target ever built at 650 feet long, the Muroc Maru was used for identification training, strafing and skip-bombing practice.  Unfortunately, the chicken feathers could not hold up to the hot winds and .50cal slugs and usually disintegrated or blew away. 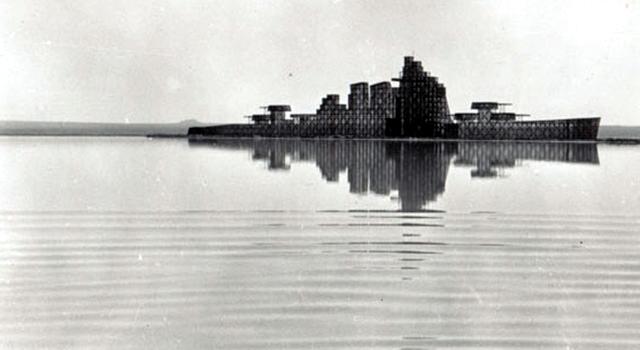 Built at one end of Rogers Dry Lake on the Muroc base complex, it often gave pilots the impression of movement from heat distortion coming off the lakebed.  It also caused some consternation amongst drivers passing by to the north, to whom it looked exactly like a ship sailing in the desert.

The Muroc Maru stayed in position until 1950, when it was declared a flight hazard and taken down (sunk?).  Reportedly the Army engineers had quite the time of it from all the unexploded ordinance in the vicinity.  All that remains today are a few tons worth of nails and staples and some sand berms.

I love the pic of the Mitchell behind it.  Wonder if it was set up with all the .50s for strafing....

(To mis-quote the Joker) "Where do you get all the marvelous pictures??

2 T.O.M., a lot of the time finding the "marvelous pictures" are just luck.  For example, I first saw a pic of the Muroc Maru while doing research for my USS Wasp post, and said "that's cool, I'll remember that."  Over a year later, World War II magazine used the same photo (the color one) in one of their contests, which rekindled my interest in the topic.  So I went digging and found the others.

Usually there's a lot of googling involved.  I've already put in a solid three hours on the upcoming PBY post, looking for suitable pics.  Sometimes, they're only available in a book... at which point I break out my trusty camera.

3 I think the Starblazers are going to have trouble turning that into a starship.

Seeing photos of the Muroc Maru reminds me of all the cool, weird, and just-plain-strike-your-fancy photos from WW2 I remembered over the years.  Other than the obvious one (The Flag of Suribachi.), the one that immediately comes to mind is the photos taken aboard the ZUIKAKU just before her crew started going over the side at Cape Engano.  I am sure other people have other photos that come to mind.