USS Wasp: The Worst US Carrier In The Pacific When you think of aircraft carriers from WWII, which do you think of?  The stately Lexington class?  Maybe you flash to the carriers that held the line in the Pacific, the Yorktowns?  Perhaps you think of the Essex class, some of whom stayed in service into the '70s and one of which lasted until 1991?  Or maybe your thoughts tend towards the Japanese Kaga and Akagi?  One can't forget the first aircraft carrier lost to air attack, the British Hermes, and their Illustrious class is an interesting type of ship indeed.

In fact, most people would think of many, many ships before their thoughts headed to the seventh carrier commissioned into the US Navy, the Wasp. 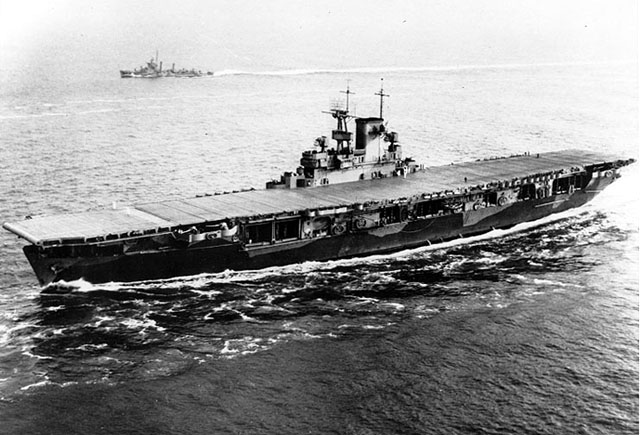 And to be brutally honest about it, there's good reason for this lack of recognition.  To say that her career was lackluster would be on the charitable side of accurate.

The USS Wasp was designed and laid down while the US Navy was still under the constraints of the Washington Naval Treaty, which placed limits on the maximum tonnage of new naval builds.  The maximum allowable tonnage for the US's aircraft carriers was 135000, with no single carrier able to exceed 27000 tons at full load (an exception was made for two ships converted per nation; for the US, these were the USS Lexington and Saratoga.  Their weights were still counted against the total, however).  As the two Lexingtons ate half the limits on their own, and the Yorktown and Enterprise, both in the process of being built, were showing signs of being overweight, the Wasp's designers were under incredible pressure to cut weight whenever possible.  It quickly became obvious that she was shaping up to have many of the same traits as the USS Ranger (CV-4) which, like the Wasp, was constructed to get the most use out of the treaty limits.  In short, she was going to have to be small.

There is nothing inherently wrong about the concept of a small carrier; the later Independence-class CVL proves that quite well.  The problem arises when the carrier being designed is a full-fledged fleet carrier, but it has to be shoehorned into a size completely unsuitable for the task, which is what happened to the Wasp.  The Yorktowns came in at about 26000 tons at full-load; the Wasp wound up being nearly 7000 tons lighter, but was still expected to carry almost the same size air group (76 planes for the Wasp, 90 for the Yorktowns).

To do all this on a smaller hull, compromises had to be made.  She wound up about 85 feet shorter (741 feet vs 824 than the Yorktowns) in overall length.  Of course, this made both the flight deck and hangar smaller as a result.  This made life cramped for the air group, even though it was reduced to begin with. 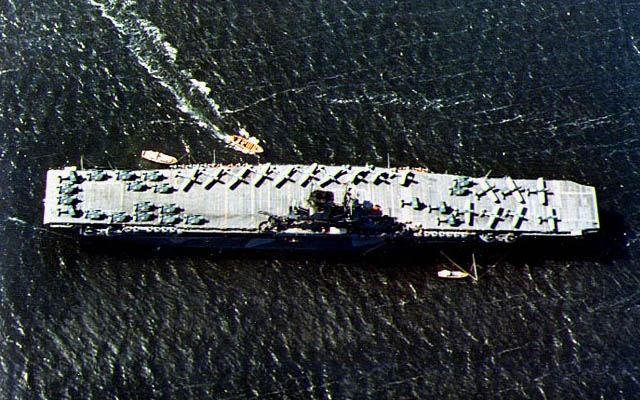 In an attempt to alleviate some of the congestion caused by the reduced topside real estate and to counterbalance the weight of the full-size island starboard, the flight deck and hull was bulged to port.  While this improved traffic flow on the flight deck, it did have some consequences.  This bulge gave the Wasp the same beam as the larger Yorktown class.  However, in a weight-saving measure, her machinery spaces were smaller, producing 75000 shaft horsepower (shp).  Comparing this number to the Yorktowns' 120000shp and the substantially smaller Independence class' 100000shp is educational to say the least.  As a result of this unfortunate combination of decreased power and wide hull, the Wasp could only make 29.5 knots at full steam, considered too slow for operations with the main fleet.  Another problem with this speed, combined with the truncated flight deck, is that there was very little room for error for a fully-loaded torpedo plane (at the time, the hideously underpowered TBD Devastator) during takeoff.  This was recognized early in the design process, however, and as a result the Wasp was not built with the specialized facilities required for torpedo planes.  Of course, this was considered acceptable in the name of weight savings.

In another attempt to save weight, she was constructed with only two elevators, fore and aft.  The midships elevator was replaced by an innovative design that after the war became commonplace: a deck-edge elevator. 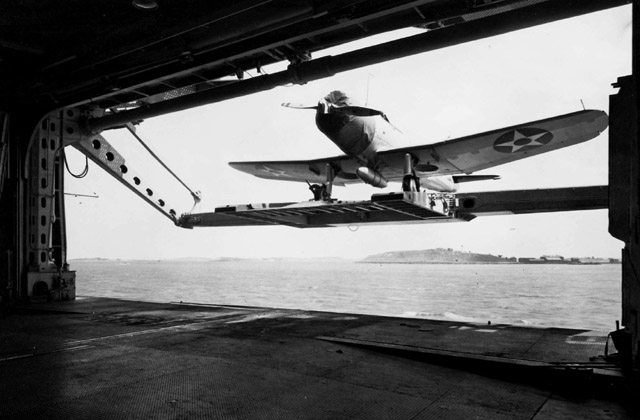 Unlike those on modern carriers, though, this one was a skeletal framework that had a socket for the tailwheel to sit in, positions for the main gear, and moved the plane in a semicircle up to the flight deck.  This was the first ever deck-edge elevator, and is probably the one shining part of the Wasp's overall design.  Still, all the weight saving was successful in that she slotted nicely into the Washington Treaty tonnage limits.

Like the similarly undersized Ranger, it was thought that the Wasp was unsuitable for operations in the Pacific.  At the onset of war, she served primarily as an airplane ferry, taking two loads of Spitfires to Malta for the British.  A month after the second of these runs, the Battle of Midway left the US Navy with only three operational carriers in the Pacific, with one of them (the Saratoga) still suffering the scars from a submarine-launched torpedo.  It was decided that the Wasp would be transferred as it was marginally more capable than the Ranger.  Carrying TBF Avengers (a torpedo plane, which she wasn't truly able to handle), Dauntlesses and Wildcats, she was part of the covering force at Guadalcanal that was withdrawn by Admiral Ghormley, which put the entire operation at risk.  The next month or so was spent patrolling and providing cover for convoys heading to 'Canal, until she was sent south, missing out on the Battle of the Eastern Solomons.  That battle cost the Navy the use of the Enterprise as she was badly mauled.  Shortly thereafter, the Saratoga proved to be a torpedo magnet of the first rank.  As she was sent to the West Coast for repairs, that left only the USS Hornet and the Wasp covering the entire Pacific.

In mid-September, however, she was engaged in flight operations when the Japanese submarine I-19 performed the greatest feat of marksmanship by a submarine ever.  The I-19 fired a full spread of six torpedoes at the Wasp, three of which hit.  Two others passed ahead of the carrier, one of which struck the destroyer O'Brien as she maneuvered to avoid the other.  The O'Brien sank shortly thereafter.  The sixth torpedo apparently passed underneath the stern of the Wasp, narrowly missed the USS Landsdowne, then proceeded on for another seven minutes before striking the USS North Carolina, a wound that required a month in Pearl Harbor to fix.

One of the worst decisions the Wasp's designers had made in their quest to save weight was the deletion of just about any armor plating.  While this would have been normal for most Japanese carriers and was considered the price of speed for them, the lack of armor for the Wasp extended to her having absolutely no torpedo protection whatsoever.  Further, her two engine rooms were grouped close together instead of being separated (to be fair, this was a failing common to US carriers at the time).  Another strike against her was that, when the torpedoes struck, she was engaged in flight operations.  Her avgas system was in full use, in other words, with predictable results when she was hit. 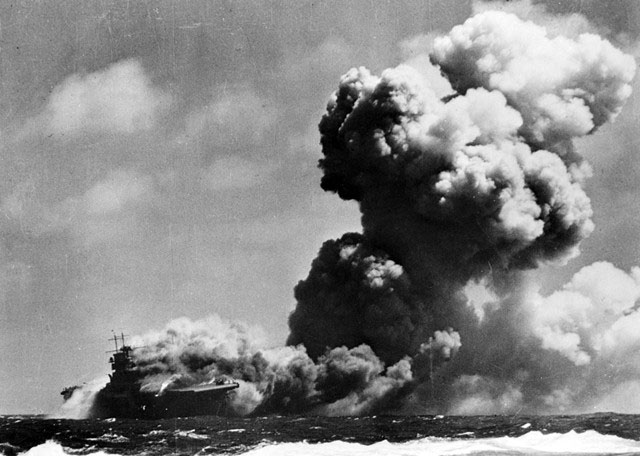 45 minutes after the torpedoes hit, the fires onboard had consumed most of the forward part of the hangar deck and were raging out of control.  Abandon ship was called, and the Landsdowne was detailed to scuttle her.  At approximately 9pm on September 15th, 1942, she finally sank in a pool of blazing gasoline.

A victim of terrible design choices, she never really got a chance to prove herself in battle (the Guadalcanal landings notwithstanding) and has thus faded into obscurity.  A shame, as she could have been an outstanding "medium carrier" if designed just a couple of years later, when such things were recognized as being feasible.  That's all hindsight, however.  In use as she was actually designed, she was unfortunately the worst US aircraft carrier in the Pacific... and the unluckiest.  To be fair, no carrier on the planet at that time would have survived taking three torpedoes at once.

Especially when they're Long Lance torpedoes, the best torpedo of the war.

I've always thought of Saratoga as a ship with poor luck. she survived the war, to be sure, but how many times was she hit? Like three? (And having survived the war, Sara was sacrificed at Bikini. Surely such a great old lady deserved better, but I guess they had to use something.)

But you've convinced me that Wasp was worse. Sara got hit, but didn't sink, and Sara accomplished quite a lot. Sounds like Wasp didn't do anything important except get attacked.

2 It's possible that the Sara wasn't useful for much after her third bout of battle damage (after the two separate torpedoeings).  She was hit by four or five bombs late in the war, had the entire front of her flight deck burnt out and her hangar deck had some major damage as well.  She was repaired on the West Coast, but you've got to think that there'd be some lingering shock damage to her hull, no matter how good the repairs.  *shrug*  That's just speculation, though.

3 Well, they needed to use at least a couple carriers for targets, and I suppose it makes more sense to use a thrice-damaged old lady than one of the new Essex CV's.

The Navy was standing down after the war anyway, so all the oldest ships were decomissioned. The only alternative futures for Sara would have been to be a floating museum, or more likely to be scrapped.

4 Of course, Wasp wasn't as badly conceived and ill-fated as IJN Shinano. Was that the other flat top you were going to write about?

5 Nope!  To me, the story of the Shinano has been told enough times before.  No, I prefer the more, shall we say, esoteric ships.  I was giving thought to the Langley, or one of those myriad of Japanese carriers that nobody's ever heard of.

6 I'm not really sure it's fair to heap abuse on the Langley. It was the first carrier ever built by anyone, and it was built on top of the hull of a coal carrier. It was proof-of-concept, and for that it worked extremely well. But it was modified in like 1923; of course it was obsolete by WWII.

7 I completely agree, Steven.  This series of posts, like the Hosho one, will tell the stories of the ship(s).  If the story is positive, then it'll be so.  If like the Wasp it's negative, I'll hit that, too.

I'm actually considering making one megapost on the three "first carriers", the Hosho, Langley, and Hermes.  Though even that's a bit of a misnomer, as the Langley wasn't the first keel up carrier for the USN.  That technically was the Ranger... but I LIKE the Langley.