Stagnant? Moi? Not intentionally... at least, not since that last post.  My internet connection has been completely down since very early Wednesday morning. 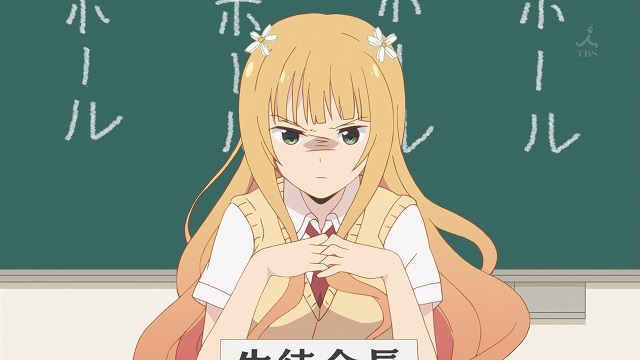 This is very very annoying.  It's not like I need help in not blogging, after all.  The connection has been up for only a short time... my modem fired up as I was looking at it, in fact... but I have no confidence in it staying up, so I thought I'd better get a notification posted.  And when I clicked to finalize this post? The internet had gone down again.  Guess I was right.  Wow, five minutes of internet in over a day.  Considering this provider's track record at times, I guess I should count myself lucky.

On the other hand, I managed to watch a few episodes of Sakura Trick, which I was told was really really good.  I will never take this person's word for something ever again.  However!  Attention Steven!  The character in the picture above normally wears red quarter-rimmed glasses!  Even BETTER than half-rimmed!  If you wanna see, check out Ep03 and beyond.

Just... don't pay attention to the show.  Or be at risk of diabetes, and by "at risk" I mean "you once ate or drank something that had some sort of sweetener in it."  And if you actually have diabetes, avoid Sakura Trick like the plague.  Dear god, this series will kill you dead.

1 Is there an ICD code for "poor quality internet connection"?

Man, down internet is terrible. Welcome back. Doesn't look like you missed much...

Avatar, it's like the Production Staff took the worst bits of Girlfriends and decided "that'll make a great 12 episode series if you just turn it up to 11."  And then covered it in honey and rolled the whole thing in powdered sugar and donuts.  Cream-filled donuts.  Where the cream is actually ice cream.

4 I thought it was called "Yuri Trick".

5 Nah.  Sakura are ever-present in this show; a translation calling it "Yuri Trick" might be unintentionally hilarious, though.

6 I thought yuri was also ever-present.

7 I thought yuri was also ever-present.

In Sakura Trick?  Oh yes, that's very much the case.  In a cloying, clingy, cringe-worthy sort of way, yes.