A Surprising Manga As I mentioned a few weeks ago, I'm not really a manga sorta duck.  Pretty much everything I own/read is tied in some way to anime I've seen.  However, I decided to give myself a gift for surviving Spring book rush and bought some manga.  Two of them were, as mentioned, spinoffs from various anime, and were purchased more for completions' sake than any particular enjoyment of the series.  I'd been seeing another title show up in my "recommended for you" list, one I'd never heard of before.  I did some digging, and found that it had almost universal praise... which really doesn't mean anything, since most of the reviews I saw were written by people who had read scanalations and liked them.  Unfortunately, I couldn't find any reviews from readers who had gone into the series blind... probably because most people aren't idiots like that.  I supposed I could have gone to one of those manga download sites, but I really don't like to do that for two reasons.  One, my monitor isn't tall enough for that; either everything is too small (fit to screen) or you have to scroll uncomfortably (full size).  Reason two is a little more serious: every single darn time I've ventured to a manga aggregator site, I've gotten multiple computer icks that have usually required a full nuking of the hard-drive and reinstall of Windows.  Every.  Single.  Time.

Which pretty much leaves me no choice but to be one of Those Guys at Barneys and Ignobles, the ones who sit in the manga section, reading the newest volume of Naruto and blocking the walkway for the real customers, oh and leaving the entire section so completely disorganized that you couldn't find what you're looking for anyway.  Not that I'm bitter or anything.  Or go into a series cold, cross my fingers and hope for good luck.  In a medium that proves that Ted Sturgeon was an optimist, no less.  Well, it wasn't going to be terribly expensive, so I went ahead and ordered 'em up.

At this point, I'm going to point out that the manga in question has some mature themes and some flat-out NSFW imagery.  While most of my post is NOT going to be NSFW, the possibility exists that I may mention some stuff that won't be family friendly.  For those who might be offended by this, I leave you with this picture and wish you a pleasant period of time (as opposed to a "good evening" or "nice morning", because I don't know when you're reading this).

What type of flower is this, hmmmmmm?  Might there be some significance to my choice?

For everybody else, come on along in.


The name of the series is Girl Friends, and it's considered something of a masterpiece of the yuri genre.  As I've never read anything else that fits into that category, I can't speak to that.  However, I can say that I really quite liked it, and not for the reason you're thinking, you perv. 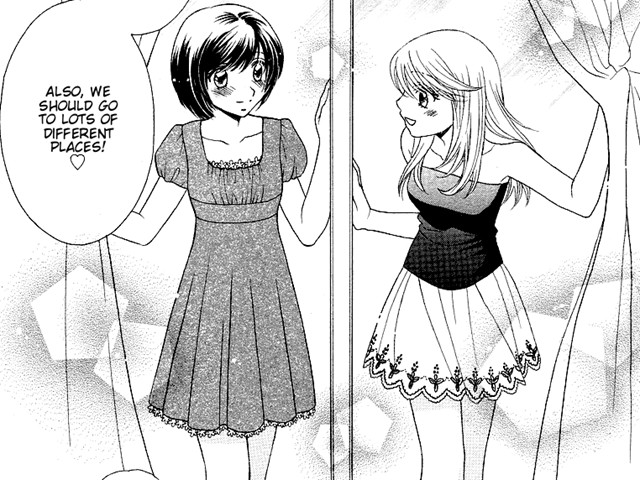 Mariko (left) is your traditional "Hollywood Homely" highschool girl: quiet, shy, an unflattering haircut and clothes... a bookworm to boot.  That is, until Akko (right), cute genki girl, notices that she's always alone.  She decides to befriend Mari-chan, pulls her out of her shell and into her sphere of friends.  From there, the two do all the things that  female friends do: shopping, studying, shopping, riding the train to school, shopping, y'know, that sort of thing.  Along the way, the two become best friends... for Mari, this is really the first real friend she's had since she was a little girl. 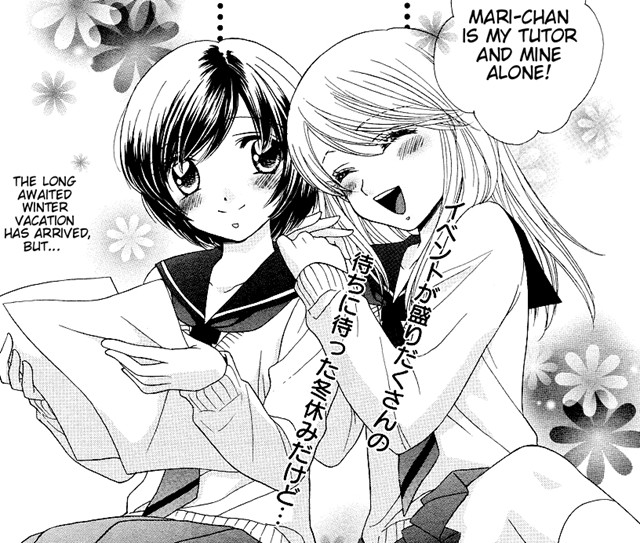 As time progresses, Mari begins to realize that she's got feelings for Akko that go beyond just friendship, but she really can't do anything about them... after all, they're both girls.  Ladies and gentlemen, let the angstfest begin!  Except... y'know what?  the angsting isn't to ridiculous levels, it makes perfect sense for the situation, and probably everybody who'll read the story will have had similar reactions to a romantic setup (even if both parties weren't female).  Then Mari-chan ends up convincing herself that she isn't really in love with Akko and the reader is suddenly left staring at the ceiling wondering just what the hell happened, and what in the world is the second omnibus going to do? 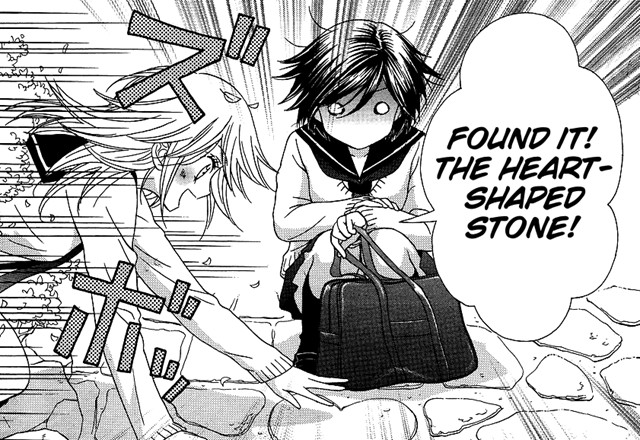 The answer is: casually switch perspectives to Akko's point-of-view, just as she's realizing that she's got feelings for Mari, and now she has to decide if she wants to follow through on them... if she SHOULD do so.  Yes, yes, let the angst flow through you... except again, it all makes sense.  None of it is tacked on, none of it is misplaced.  Sure, a lot of it could be solved just by Akko going up to Mari and saying "I love you," but that's not exactly easy to do in the best of situations.  For two teenage girls in a society that tends to frown on individualism?  Right, exactly. 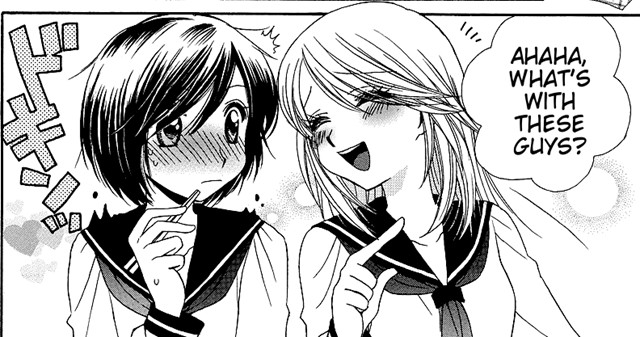 The ending of the story is... unexpected, but in a good way.  Again, it all makes sense in context, and feels neither contrived or a letdown.  By the time you reach the end of the second omnibus, you realize that that the storyline works perfectly.  That it's yuri doesn't even enter into it by that point: it's just good storytelling all around.  Some might say it feels rushed, and I might even agree; another chapter or two might have helped, but that's mild picking of nits at most.  I gather that writer/artist Milk Morinaga is something of a legend in yuri manga circles; if the rest of her work is of similar quality, I can understand it.  The artwork is, if not brilliant, good enough for the job. 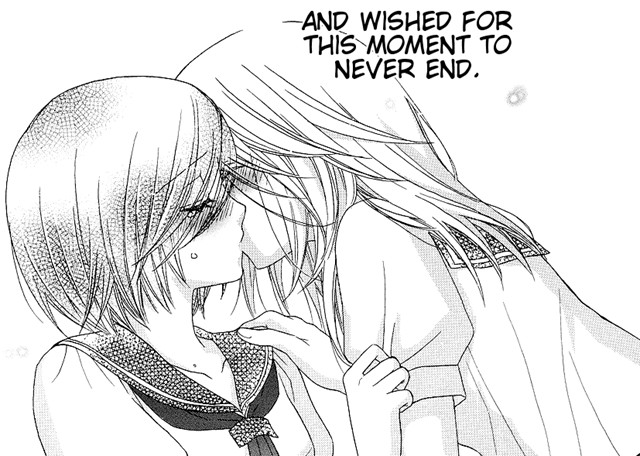 Note: this picture is NOT a spoiler.

What I wonder about, however, is just exactly who Girl Friends is targeted at?  If it's dirty old men who like seeing two girls get it on, there's a remarkable lack of getting on with it.  If it's aimed at girls, it would seem to be encouraging yuri, which seems like a decidedly suprising choice.  The series was originally serialized in Comic High!, which describes itself as "shoujo comics for boys and girls."  The most surprising part of Girl Friends is just how much warmth there is to it.  The relationships are certainly more believable than, say, the one between Tomoya and Nagisa in Clannad... and I liked that series!  It isn't all drama and angst, either, there's plenty of humor and thoughtfulness as well. 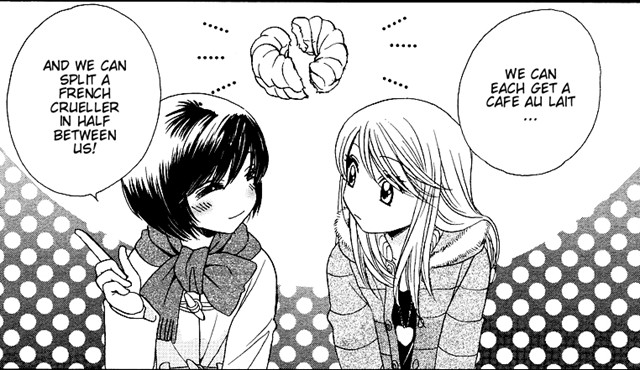 My biggest regret is that it will almost certainly never see its way to becoming an anime.  There just isn't enough material here to turn it into a 13-episode series.  Perhaps a three-episode OVA, but even then it seems a stretch.

I highly recommend Girl Friends to anybody who doesn't find same-sex relationships distasteful.  The storytelling is impressive, the characters fun to be around, and the plot believable.  What more could you ask for?  List price for the two Omnibuses (omnibi?) combined is $36.00, so we're not even talking an arm and a leg.  Seven Seas did the translation, and it's light-years better than the fan-made one I downloaded to get pictures for this post.  The books are available in the usual places, so go get 'em!

1 What does it say about me that as soon as I saw that first pic I was all, "Hey, Lililicious" And then I was all, "but they didn't scanlate 'Girl Friends'..."

All kidding aside: A proper translation and dead-tree publication of 'Girl Friends'? Good to know. It's one of the few genuinely good yuri titles I've ever seen.

2 I think I've discovered who Girl Friends is aimed at: ducks.

3 Do Song of Wind and Trees next!