Some More F1 News 'n' Tidbits As test session #3 continues in Barcelona, a few more bits of news for us here on a Saturday.

First off, HRT has made an appearance!  Not, alas, in their new car, but they were on track at Barcalounger.  And behind the wheel?  None other than The Fashion Victim himself, Vitantonio Liuzzi.  Now we all know that HRT is the only team with an open seat for the 2011 season, and time is running seriously short.  As much as I'm not fond of the guy, he'd be a fantastic pickup for the no-longer-rookie team.  One of their biggest problems in 2010 was that they had two rookies driving for them, drivers who couldn't draw from past experience to say "this is wrong" or "don't touch that."  Fielding a lineup of Liuzzi and Narain Kittylitter would be a huge step up from Cowboy Karun Chandhok and Bruno Senna...

Over in Bahrain, things are getting even messier.  More dead in the streets, reports of anti-aircraft guns being fired "over the heads" of protesters, and perhaps most incredibly, helicopter gunships shooting clearly marked ambulances.  In the wake of all this, the UK Foreign Office has issued a travel advisory for Bahrain, warning against all non-essential travel to the country and telling British nationals in the country to keep their heads down and not to go outside.  Of course, many F1 teams are based in the UK, and there's a whole slew of Brits up and down the paddock.  Unless there's a miracle of some sort, I think it's pretty much a given that the first Grand Prix of the season is going to be canceled.

On a lighter note, I went grocery shopping this afternoon and as I often do, I stopped in the toy section to see if they had any rubber duckies... they didn't, but they did had a huge display of Hot Wheels cars.  Unfortunately, they were in a bin so you couldn't see what was on the bottom.  Just for the helluvit, I reached in at random and pulled a car out... sometimes the designs are amusing, after all.  Much to my amusement, this is what was in my hand: 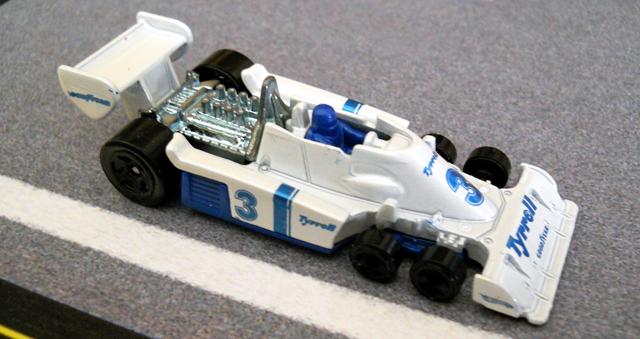 Yup!  It's the Hot Wheels version of the Tyrrell P34, my favorite F1 car of all time.

It's not a horrible rendition of the car, actually.  The driver's hideously out-of-scale as are the front tires, but for all that, not too bad.  For a dollar, you don't particularly expect slavish devotion to detail.  The paint scheme is completely unrelated to anything the P34 was ever attired in, but not a horrible fantasy; there was a white upper/ dark blue lower paint scheme for the car.  Apparently Hot Wheels did release a dark blue version of their car as well... I'll have to see if I can find one.

1 Yeah, it was pretty surprising to see a vintage F1 in the middle of their usual muscle cars or silly dragsters. I have the dark blue one with yellow trim and black underbody, and it does look quite good. Only thing missing is the elf sponsorship.