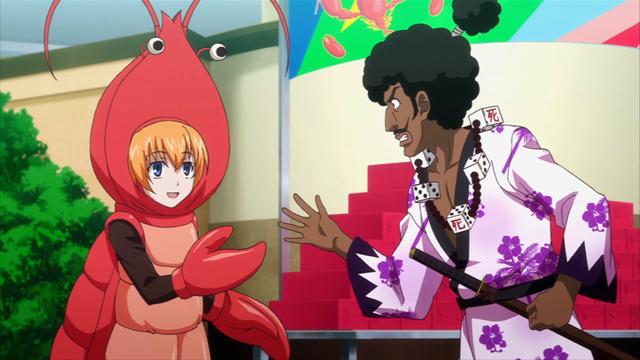 Afro Samurai there on the right is the unluckiest man on the face of the earth.  He's playing Rock-Paper-Scissors with Anya, and has just lost to someone who can only do "scissors".  He's also the stupidest person on the Sky Resort.

Ah yes, the Sky Resort, the flying hotel-cum-water park that was introduced last episode.  We learn that its cruising altitude is 4000 meters, and that there are open-air pavillions where people can stroll around.  At 4000 meters, or 13123 feet.  Now, I've been to Salt Lake City, which is 4226 feet above sea level, and I can attest that there ain't no air there.  Altitude sickness can begin to occur at 2400 meters.  And the Howard Resort is letting their guests walk around outside and unprotected at 4000 meters?  Of course, they do let employees wear friggin' shrimp costumes, so I suppose I shouldn't be surprised.

Anyway, Rio's been challenged to another Gate Battle.  Wow, what are the odds of that happening, huh?  Go figure! 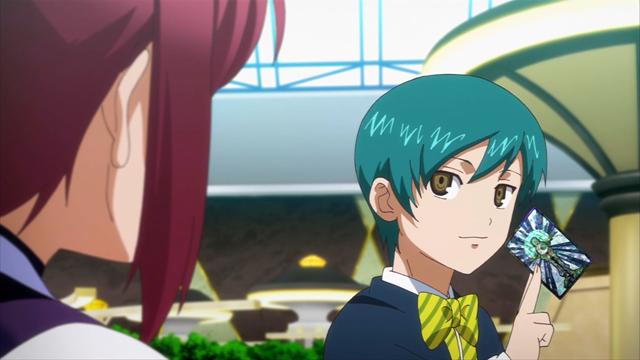 ...and there's her challenger.  Jack Mighty is his name, and he's the latest in a long family line of Bomb Disposal men.  As a result, he has telekinesis (don't think about it too hard; in RRG! it doesn't pay to think about anything).  It turns out that he didn't want to do bomb disposal work and ran away from home... at which point, he was picked up off the streets by... 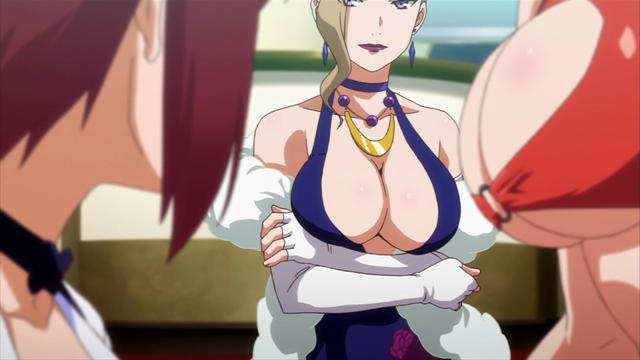 ...the evil Cartia, a rival casino owner who seems to have a nefarious interest in Rio's skills.  I'm not entirely sure why, as Rio's skills allow the casino's guests to win large amounts of money, which is contrary to everything a casino stands for, but once again, it doesn't pay to think too hard when watching RRG!.  The stakes in this Gate Battle are high: if Rio wins, she gets Mighty Jack's Gate.  If Rio loses, Jack gets all three of Rio's Gates, his freedom from Cartia who keeps him a virtual slave, and Cartia gets ownership of Casino Island.  Of course, The Owner agrees.  Of course, The Owner is an idiot.

This week, the challenge is that well-known game of skill and chance that's played in every casino worldwide, Space Pinball.  Why do I do this to myself? 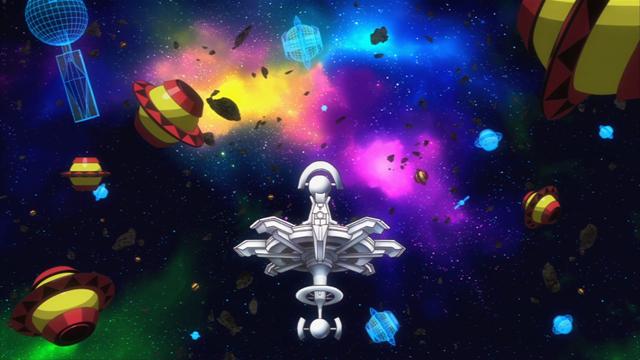 Of course, it will take place in Sky Resort's holodeck, which was mentioned briefly last episode.  The competitors ride in individual pinball-shaped ships, armed with twin zappers and controlled by two thrusters on the stern.  The environment is controlled by Linda, the suntanned native girl/computer with a penchant for losing her head. 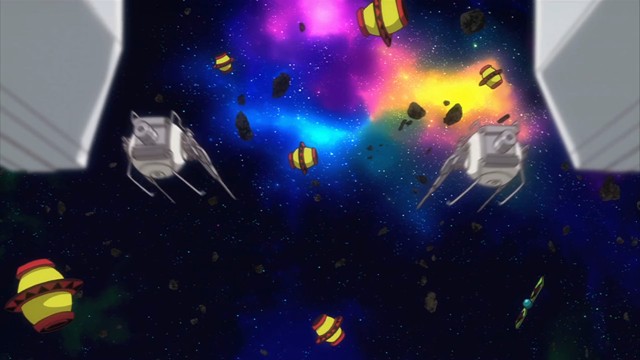 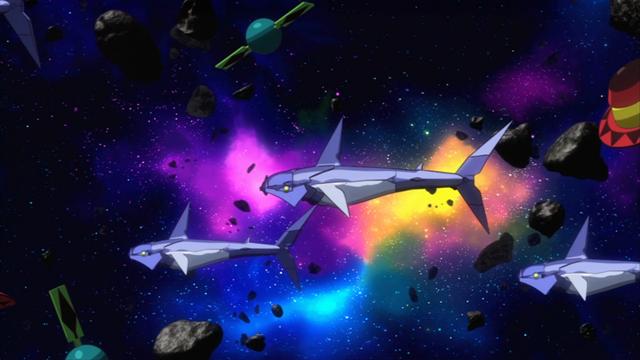 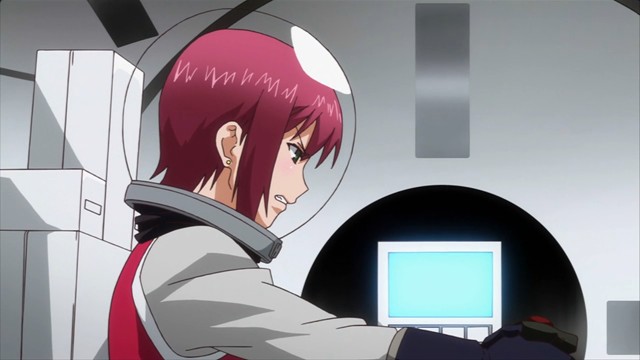 He repays her kindness by turning his zappers on her, crippling her ball and sending her spiraling off towards a Black Hole.  Gloating, he declares victory... to which, Rio gets all badassy and shoots back with a "I have not begun to fight"-style one-liner. 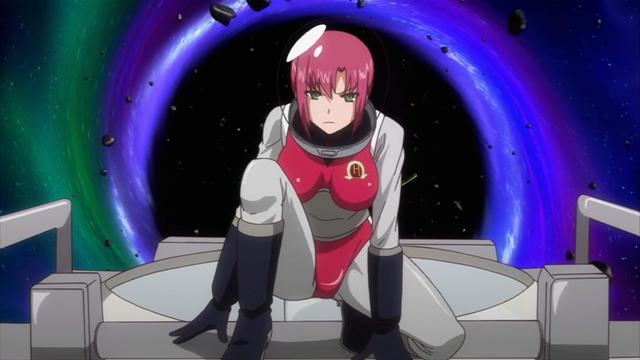 She exits her crippled ball, and is promptly pulled off into the Black Hole.  Crossing the Event Horizon, she is almost immediately torn apart by the uneven gravitational forces working on the opposite ends of her body.  However, she herself does not realize that this has occurred, as time has slowed to an infinitely slow rate.  To the viewers watching from the holographic space station outside she just seems to disappear.  When the mass of her shredded body smacks into the singularity at the heart of the Black Hole, she dissolves into a small burst of energy and radiation, none of which is visible to the outside world.  Next week, we'll review episode 07 of Jack Mighty Rainbow Gate!. 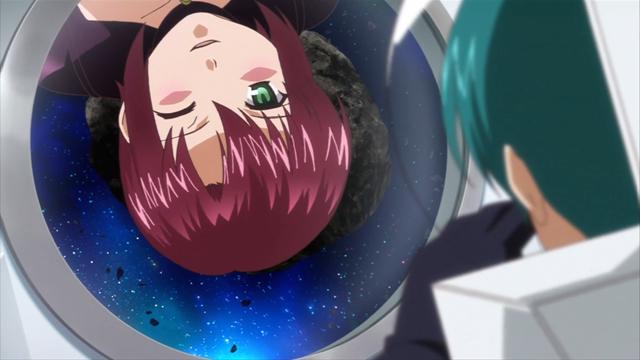 Actually, it appears that the rules of Space Pinball are somewhat hazy on how points are scored.  Nowhere does it state that one has to be in a ball to score, so Rio begins hopping from asteroid to bumper to asteroid, scoring points every so often.  Eventually, she lands on Jack's ball (ow!) and distracts him long enough for him to run into an asteroid.  He's immobile, but that won't last for long... how can Rio score enough points to turn the tables on the telekinetic teenager? 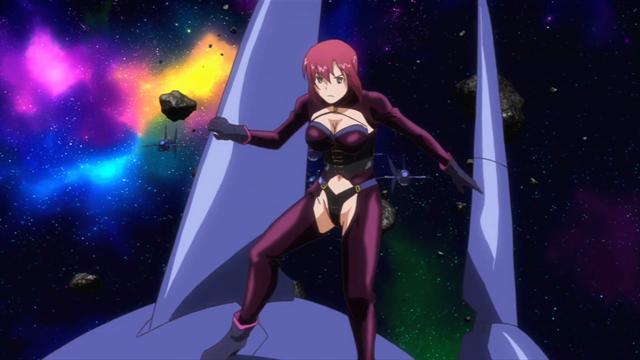 By riding on a holographic space shark, of course.  Somewhere in Japan, an entire anime production team is laughing at me.  I can't help but think that this suit she's wearing would go a long way towards increasing the budget of NASA... if astronauts looked like Rio, of course.  Time eventually expires, and the holographic space shark-borne Rio wins by the smallest of margins... again. 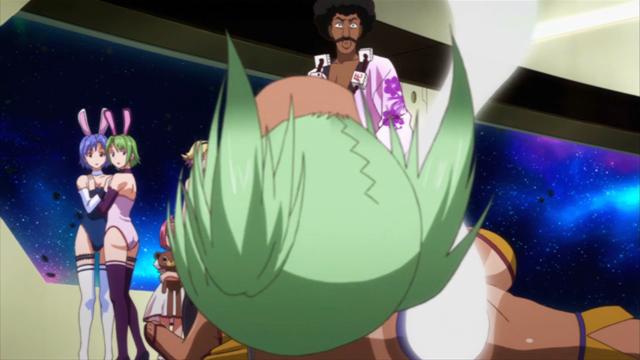 Then Afro Samurai bumps into Linda.  You remember Linda?  Native girl/computer with a tendency to lose her head?  That Linda?  The same Linda who's controlling the holodeck?  If you've got a bad feeling right about now, either you had some bad fish for dinner or you've watched enough anime to know what's coming next. 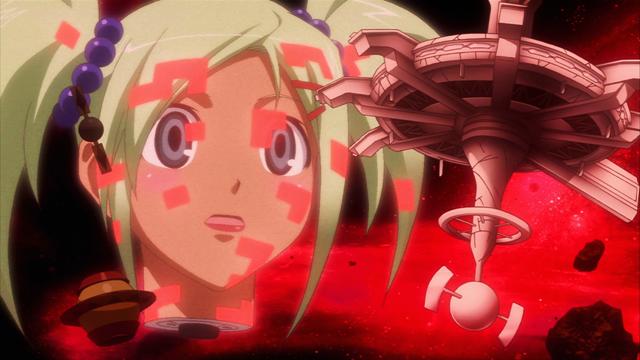 "Phase IV.  Phase IV."  You just know that when a giant holographic disembodied head of a computer is floating in a holodeck portraying blood-red space, nothing good can be about to happen. 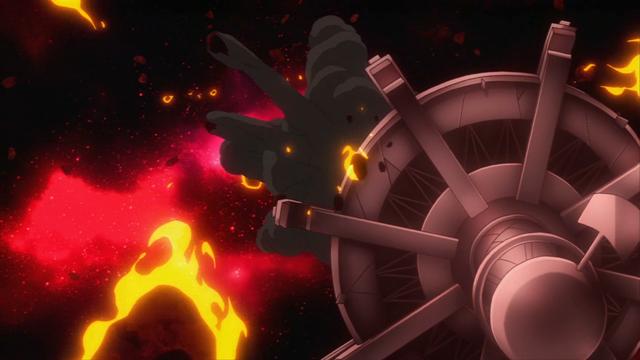 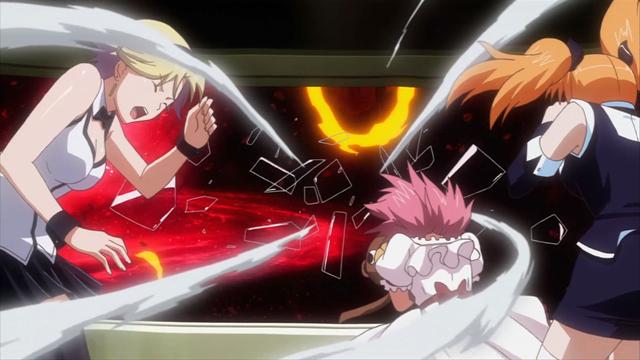 Holographic containment is breached, resulting in the air in the holographic spacestation being released.  Explosive decompression cripples almost everybody watching the Space Pinball Gate Battle, their broken bodies floating out into space... where the holographic space sharks are waiting.  A feeding frenzy begins, horrifying those few lucky enough to be watching on other parts of Sky Resort.  The Owner, realizing that the lawsuits will begin flowing in any second, leaps from the roof of the floating building.  With any luck, he'll be unconscious before he hits the water.

OR... only Mint is sucked into holographic space, where she is threatened by a holographic asteroid.  Fortunately, Mighty Jack appears at the last moment and uses his telekinetic powers to keep the asteroid at bay... for the moment.  Rio dives into the Giant Disembodied Holograpic Head... 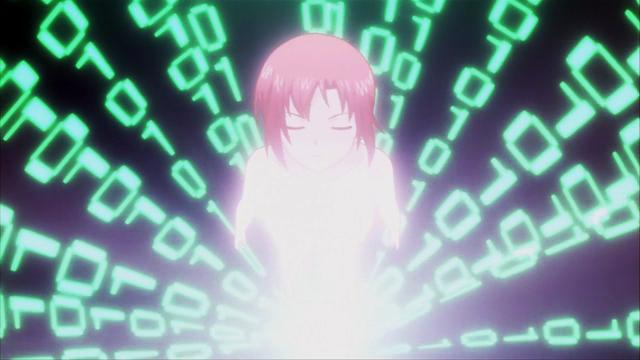 ...and, I guess, becomes one with the Matrix or something.  All she does is just kinda stand there as the Green Rain flows by.  Still, she must have done something right, because everything returns to normal.  Everybody laughs, and Jack hands Rio his Gate, the fourth she's acquired.  All is unicorns and rainbows, fade to black, The End.

What's glossed over is that Mighty Jack now has to return to his slavery.  Oooh, harsh buzzkill, dude. 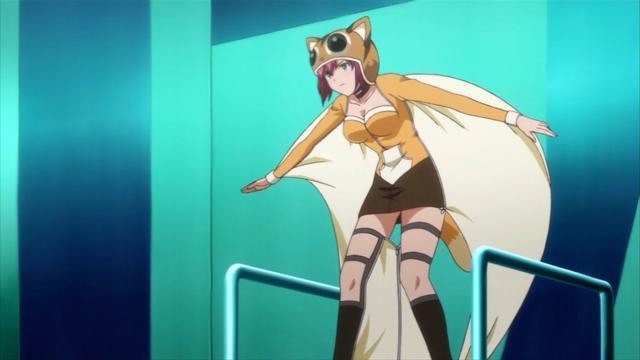 2 I have a vague memory of an episode of Dirty Pair that was a lot like this.

3 Aha! I just figured out what is going on! The Casino Owner is actually Kyubey in disguise!

4 "Somewhere in Japan, an entire anime production team is laughing at me."

Best laugh in a while.

Yes, and between guffaws, they're saying, "We got one to episode six!  Can you believe it?!"

I would believe that if I didn't enjoy stuff just as bad. I'm missing the fatal attraction RRG has for *you*, but I certainly enjoy my share of stupid anime.

5 You know, I can actually construct a theory of why you would want Rio around.

Casinos are all about gambling, correct? The house knows that eventually people are going to win money. The trick is getting enough people in the door so that the house take is more than it costs to keep the casino open.

Every casino on the strip has blackjack, and it's the same at all of them; same rules, same odds. Except one. At one casino there's a Lucky Dealer, whose clients win a lot of money.

Why would you possibly gamble anywhere else?

Sure, Rio's clients win lots of money. But the other tables are full too, because everyone wants a shot at the Lucky Dealer. And if your casino head is half as smart as he ought to be, he's going to have a lot of busty Rio-lookalikes dealing, so lots of these guys will be gambling and thinking "gee, maybe this is the lucky dealer!"

And if the casino head is really smart, the real Rio will be kept away from the table as much as possible, doing things like wearing ridiculous fanservice costumes and competing in wacky events that involve lots of jiggle. Every so often she goes down and deals, and someone walks away a big winner, just so that the other gamblers are thinking "gee, the lucky dealer is real! I've got to come back tomorrow!"

Logical, Av, except for two things.  1) The Owner ISN'T that smart, and none of the dealers look anything like Rio; and B) Rio's luck isn't limited to the person she's dealing cards to, it's an AOE thing... there's one scene in the first episode where she walks down an row of one-armed bandits and each one rings up a jackpot as she passes by.  Then when she enters the casino proper, everybody suddenly begins winning: people at the craps table roll what they need, blackjack players all hit 21, etc etc etc...

She's EXPENSIVE, is what she is.

7 Maybe it's a Futureworld kind of thing, where the owner is using Rio to lure hordes of people to his casinos where they can be replaced by look-a-like androids.  These androids are so realistic that they even have tan lines, though quality control on the head-retention bolts needs improvement...