Today, the FIA officially charged Piquet Jr's former team, Renault, with 'fraudulent conduct' in relation to the 2008 Grand Prix of Singapore.  In that race, you may remember, HWMNBN pitted early in the race (lap 14), and almost instantly after he exited the pit lane in 15th place, Piquet Jr spun and crashed, bringing out the safety car. 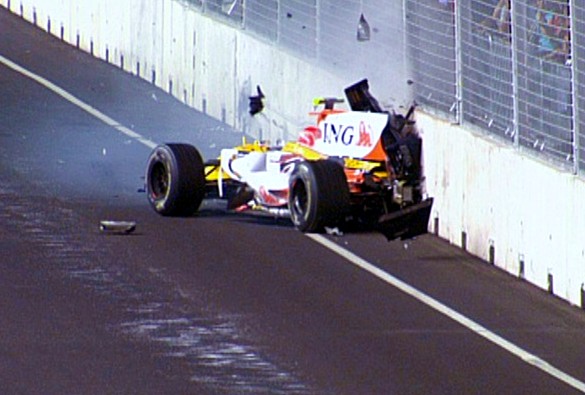 Even at the time, it seemed an odd crash.
When the pit lane opened two laps later, everybody went in for fuel and tires, leaving HWMNBN in first place, a position he would never relinquish as he garnered Renault's first win of the season.

The charges levied against Renault stem directly from evidence provided by Piquet Jr, and read (in part):  "The team representatives have been called to answer charges, including a breach of Article 151c of the International Sporting Code, that the team conspired with its driver, Nelson Piquet Jr, to cause a deliberate crash at the 2008 Singapore Grand Prix with the aim of causing the deployment of the safety car to the advantage of its other driver, (HWMNBN).”

This is the same section the FIA used to hit McLaren with the Death Penalty back in 2007, by the way.  In that case, the World Motor Sport Council essentially said that, while they could find no evidence that McLaren used any of Ferrari's designs in their car, they didn't need to have proof.  McLaren was fined $100million, and the team was excluded from the results of the 2007 season.

While that penalty seemed harsh at best, and draconian at worst, I would have to assume that the FIA is looking at a similar penalty now for Renault.  Unfortunately, they have only the word of a disgruntled ex-employee to go on... but they need nothing more, apparently.

If, in fact, Renault is excluded from the remainder of the season, don't expect to see their cars on the grid for the rest of the year.  Unlike the McLaren Penalty, where the drivers were cleared of any wrongdoing in the matter, one would have to assume that HWMNBN would be slammed, since he benefited directly (and may have even come up with the idea) from the team's orders.  Since Piquet Jr is already out of F1, the team's other car will probably be yanked by the FIA out of anger or spite.

The rest of the fallout could be even worse.  Considering the rumblings coming out of Renault as of late (and, in fact, for the past few years), there's every chance that the team would officially withdraw from F1 and shut down.

I find it... interesting... that HWMNBN is involved with both of these cases.  Unsurprising, but interesting.  There's a reason HWMNBN is called HWMNBN, after all, and it all stems from the 2007 McLaren Debacle.  He's already proven that he's not above trying to screw his teammate for an advantage, and with the backing of team principal Flavio Briatore, who knows what mischief he'd be capable of brewing.

Also interesting is the question of what will happen to Piquet Jr now?  Will he be hailed as a whistleblower who got bent over by his more powerful teammate, with his driving suffering as a result?  Or will he be forever known as a mediocre racer who ratted out the team that paid him megabucks while getting crap performances from him?

Time will tell, and we'll find out the result of the FIA's hearing on September 21st... ironically, the Monday before this year's Grand Prix of Singapore.

1 So Piquet is saying that he was ordered to crash? Is that the story here?

The TV networks could not write a better soap opera than this is turning out to be.

I wonder if this will taint HWMNBN as far as signing with Ferrari is concerned?

4 I find it hard to believe that any driver would intentionally take such a dangerous crash to help his teammate. Schumacher putting it gently into a wall to screw up quals is one thing. Crashing at high speed into a wall on a narrow track is different.

5 I was wondering about that myself.

6 I don't disagree, wipis, and it is important to note that Piquet Jr does have a good reason to lie like a persian rug... or, as Mallory mentioned in an e-mail to me, maybe it's more Nelson Piquet Senior that's doing this.

Senior and Renault were pretty much trying to knife each other whenever possible over Junior's perceived treatment.  Maybe it's all a scam, maybe it's the truth, maybe it doesn't matter because the WMSC doesn't need proof.

Guess we'll find in a week, though.