I Need Some Photoshoop Help Here is a picture: 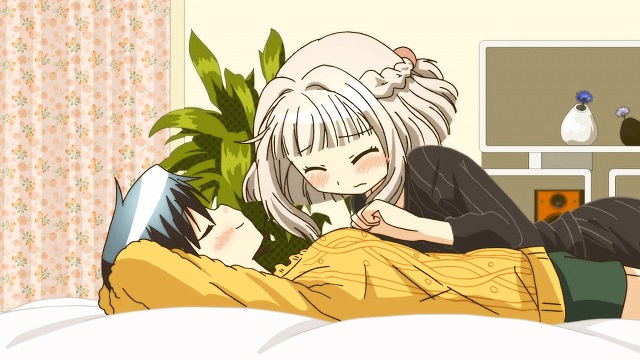 In this picture from Ep09 of Hidamari Sketch X Honeycomb, the namesake of my new computer, Nori, has just hit Nazuna (aka "The Cabbage") with a sick burn.  I very much wish to make this picture my wallpaper, except for one thing: I dislike The Cabbage.  Either in the manga or the TV series, she's just a horrible, horrible character, all wimpy and pathetic.

So here's my request to you, the assembled Pond Scum.  Photoshoop The Cabbage out of the picture for me!  I really want to do it myself, but considering my rudimentary skills in Adobe's wonderful program, the universe will suffer Heat Death before I finish the task.  So I ask you, the computer wizards, the artists, the photoshoopers, to do me a favor and remove The Cabbage.

I can make it worth your while... a complex post, a Duck U t-shirt, something like that.  Or just effusive praise and a lot of ego-boo!

1 Which one's the "Cabbage"? Dark hair or light hair?

3 I'll see what I can do.  Fixing the background might be tricky.

4 Yeah, she's easy to erase with the magnetic lasso, the hard part is drawing the plant and the speaker! If you have some other screencaps from the same room, they could be pasted in.

5 Unfortunately, everything from that angle has The Cabbage in the way for the most part.

6 Sadly, I can't draw plants or speakers, so I've stopped here for the night.

7 That's a trifle further than I got. I was considering nuking the plant and just extending the curtains and wallpaper.

But frankly, I'm on major mandatory overtime this week and weekend. so I don't know how far I'll get.

I mean, I still need to make five more blog entries to push all the comments off my front page. :-)

8 J, it's very good, but is it just me or are you working on the small version?

How attached are you to the entire image?  I assume you're just after Reclining Nori.

Could you find another apartment-room background shot elsewhere in the show (either a no-character shot, or one with a moving character so you can piece together the whole thing), and 'shop Nori+futon over the top of it?  Or, to be pedantic, over the bottom of it?

(Shirley, that's easier than copying the art style and drawing your own rest-of-speaker & rest-of-plant.)

10 I am not, in fact, attached to the rest of the image other than Relaxing-Nori-On-A-Bed... if someone wanted to make an interesting background, that'd be cool.

As far as I'm aware, this was the only episode where we see this particular angle of shot... from the way the room is laid out, the camera is imbedded in the wall.  Also it's Nazuna's room, but that's beside the point.

11 I was working on the full-sized image, but just posted a small one since it wasn't done. I've been too busy to go back to it, but if no one else beats me to it, I think I'll just nuke the speaker and the plant; much easier to match the wall and cabinet.
-j

13 You rock, J... what would you like from The Pond's prize closet?

14 The effusive praise is sufficient.

15 Damned overtime!  That praise could have been mine!  Mine!