Here She Is! Ladies and Gentlemen of the Pond Scum, allow me to introduce you to Nori, my new computer. 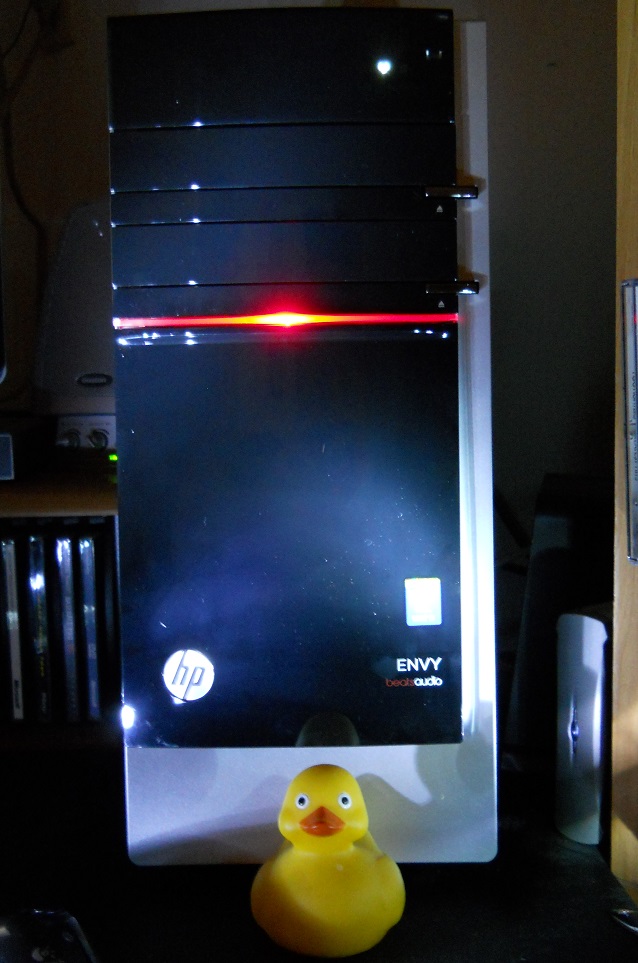 Nori is a HP ENVY 700-074.  She's loaded with a 4th Generation quad-core i5 chip from Intel, running at 3.0GHz.  There's 12GB of RAM,  a 2TB hard drive, built-in wireless networking (which I'm not using), and a pretty case that attracts fingerprints like nobody's business.  It also came with a wireless keyboard that I'm honestly not fond of (it's essentially a laptop keyboard) but I don't own any USB keyboards, a wireless mouse that I'm not using because the one from Logitech that I own is a lot better, and built-in graphics that... well, they aren't great.  I've discovered that I am in love with USB 3.0, and am very glad that my external hard drive came equipped with it.  The only problem is that two of the four USB3 ports are top-mounted behind a fairing, while all the USB2 ports are front-mounted, behind a drop-down panel that doesn't leave enough space to insert a wireless mouse thingy and still be able to close the panel. As a  result, I've got the Logitech mouse thingy plugged into one of the USB3 on top, which is silly.  I think I'll be able to survive, however. 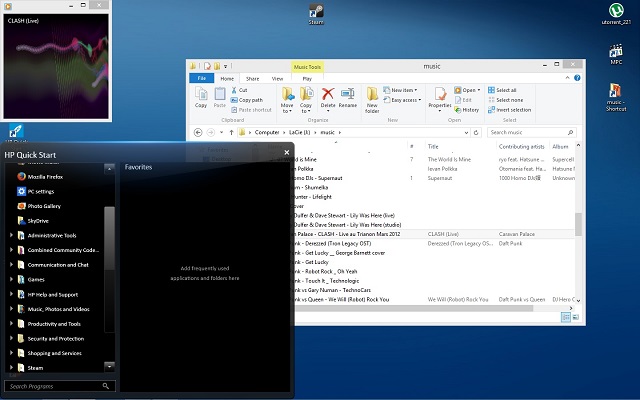 Click to see a better look at the QuickStart menu... and some of my music collection.

Setup went the way it usually does, mostly waiting for Windows Update to figure out that yes, I really DO want it to install the updates, please.  I'm a little afraid to add the graphics card... what I don't need is a repeat of what happened LAST time.

But that's dwelling on the negative.  So far, I'm pleased as punch with Nori, and suspect she'll be with me for a good long time! 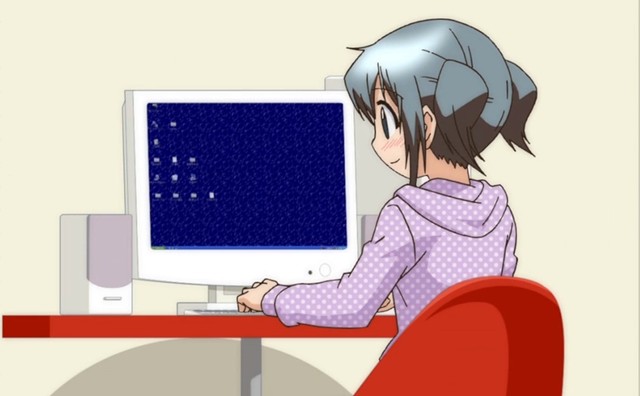 1 Etna, the new laptop, waves hi, being an HP Envy series too.

What's the genesis of the name?

2 Nori is my favorite character from the Hidamari Sketch franchise; she's the closest to being normal and well-adjusted of the bunch, with a dry sense of humor.  She's also the only one of the six with a computer, as seen above.

3 Ooh, I can't bear HP stuff any more ever since they hosed me with a laptop in 2011.  Other than that, it looks like a nice PC.
I have a Gigabyte motherboard with  sockets for 8 or 10 USB ports (a mix of 3 and 2) on the motherboard.  I doubt your board's got any extra sockets but if it does you could attach a cable internally and put the mouse adapter completely inside the case.

5 There's a whole half-episode of Sae and Nori talking in the most recent series... and we're getting two specials in November.

6 RickC, there's actually plenty of USB ports, but the wireless mouse dingus has a blind spot of RIGHT WHERE I USE IT THE MOST if I plug it into the back of the computer.

Same thing happened with Chiyo-chan, so it's not a Nori problem, but a Logitech one.

7 My Logitech wireless devices came with USP extension cables that even included a little stand to hold the widget at an angle.

There also turned out to be a update available to one of them so that it worked with the newer mouse so I didn't need both of them any more.

I've seen the extension cables Mauser's talking about; you could probably get one at Fry's or the equivalent, or a short regular cable & a hub.

10 Man, I have put my two copies of Windows 7 into a nice fireproof lockbox.  I'm doing everything I can not to have to get Win 8.  The wife bought a new laptop and 8 was the only option for it.  I'm hating supporting it.

11 A cylon?  Bah.  I'd be VERY disappointed to learn that the designers of  this beautiful rig did not intentionally base it off the original Knight Rider.

What?  So what if I'm the only one?  It's a shadowy flight into the world of a computer, which does not exist...

12 @ Brickmuppet, you mean Windows 8 isn't programmed to say "By your command" when you click an icon?

@ Tom, that's the German version of the machine you're thinking of.

@ Mauser, my first Logitech wireless moose came with one of those... I might have to see if I still have it around here somewhere.