"How I Spent My Tuesday Night," by Wonderduck Like this: 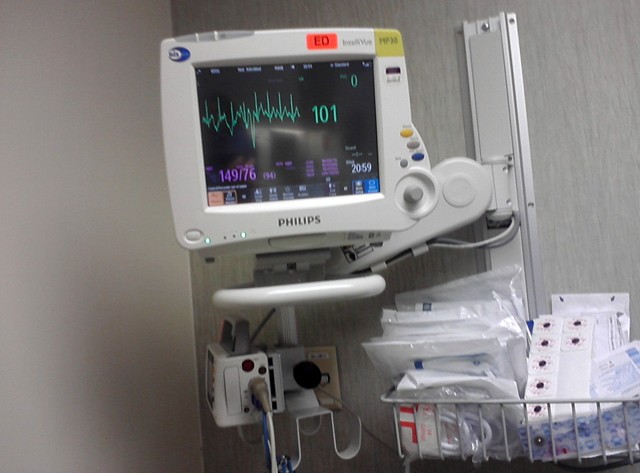 Around 515pm tonight, I was sitting in my office, counting down a cash register, when my heart skipped a beat.  Eh, no biggie, happens every now and again to pretty much everybody.  For me, it's gotten relatively routine... my doc told me it wasn't anything to worry about, after all.  And then it happened again.  Still, no worries... I've had it happen twice like that before.  Then it happened yet again.  And again.  For the next five or ten minutes, my heart was doing this oddball stuff.  When it happened twice in a row and I got all sweaty, I knew there was something very not good going on.

As I write this, it's around 1130pm, and I just got back from the Emergency Room.  Good news!  No heart attack, not even a "silent" one.  In fact all my blood test results came back clean... except for one.  It seems I'm hypothyroidic, which would account for some things that I was putting down to getting older.  I'm not a 25 year old anymore, after all.  The thyroid also has a definite tie to heart rhythm.

So tomorrow, I get to call my doctor and make an appointment.  But I'm still alive, despite my body's best attempts at making me the opposite.  You guys can't get rid of me that easily.

1 Oy! Glad it wasn't something serious, but the scare probably took some time off your lifespan...

Very, very glad it wasn't an actual heart attack, but you could've done without that kind of scare, I'm sure.

4 I can empthize.  I deal with atrial fibrilations which have put me in the hospital at least six times in the last five years.  Very uncomfortable and they raise my chance of having a stroke.  (I personally blame them on the eight to ten years of imbibing on multiple cans of dr pepper during the day, and four hours of sleep at night.)

I'm a bit jealous.  Your heartrate doesn't seem to spike as high as mine does when I have an attack.

101 is downright calm.  (I usually deal with 145+ heartrate while this is occuring.)

Good to know you're okay, and I hope you find an excellent cardiac physician.

5 The duck already had an episode of absurdly high heart rate, and he takes medication to control that.

7 Glad you're okay!  I have the same problem with skipping beats, but mine's a function of my anxiety disorder.  Still, it stinks.

8 Crud.  Well, at least the good doctoring community supposedly has this one nailed down.  (according to the Mayo Clinic website)

9 Tom, that picture was taken nearly three hours after the attack.  My resting pulse is normally in the 70s.  My BP usually sits around 125/70.  And I'm not usually in a hospital.

Wanna talk about high pulse rates?  Read this.  It's the part just before they kill me.

10 Jeez,'Duck, not the way to start spring.  I had to be catheterized for my a-fib, but that was 5 years ago and it hasn't bothered me since.  Hope this finds you in good spirits and feeling better.  Take care.

11 Ow ow ow. Not fun. I've only ever had palpitations, myself, and that was bad enough. (The lesson was "some herbs in herbal teas are not your personal allergy friend.")