High School Of The Dead Ep05 So, last episode we saw Takashi and Rei get their photo taken by a recon plane, rob two policemen and a gas station, and leave a survivor for the undead.  Oh, and about a third of the episode was taken up by a recap.  Which would be like this paragraph turning out to be seven hundred words long... don't worry, I'm not gonna even try to do that to you.  You want a recap of last episode, or of the show so far?  Read the episode posts!  Advantage: The Pond!  So, High School of the Dead, what wonders bring you me with Episode 05? 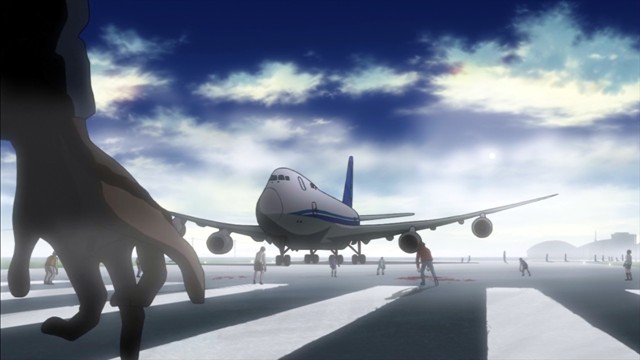 "Ladies and Gentlemen, this is your Captain speaking.  The crew has finished its inspection of everybody on board, and apart from Mrs Snodgrass in First Class, nobody has shown any sign of being either infected or already dead.  So as to not disturb the patrons in First Class, she has been moved to Coach.  We will be experiencing a short delay as the runway seems to have been infested with the undead... or as we up here in the cockpit call them, passengers.  Ha ha, just our little joke, we're kidding of course.  We know you have your choice of airlines, so on behalf of all of us, we thank you for flying with Oceanic Airlines today." 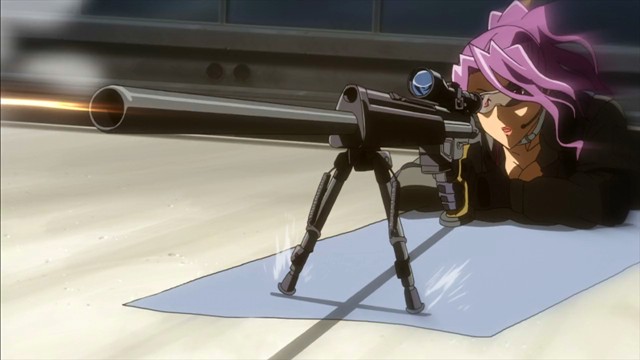 Sucking a destroyed zombie into an engine would be only mildly better than sucking a "live" one into an engine, but you can push dead ones off the runway.  Turning living undead into dead undead is her job, and she's quite good at it. 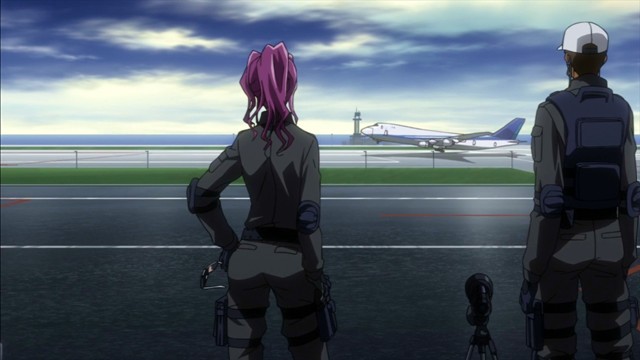 Her name is Rika, she lives on the second floor.  She's the fifth-best sniper in the Japanese Police Special Assault Team, which seems rather a specific ranking.  Me, I'm the third-best duck-based anime blogger whose name beings with a 'W'.  I move up to second if you only count those of us who are currently blogging HSotD.  Rika and her partner were scrambled to this unnamed "floating airport" which is pretty obviously Kansai International to help with a "terrorism" problem.  Terrorism, undead, eh, whatever.  They've got plenty of ammo, but sooner or later, they're gonna run out.  What then?  Well, she's got a friend in the city that she'll have to go find... a nurse at one of the high schools. 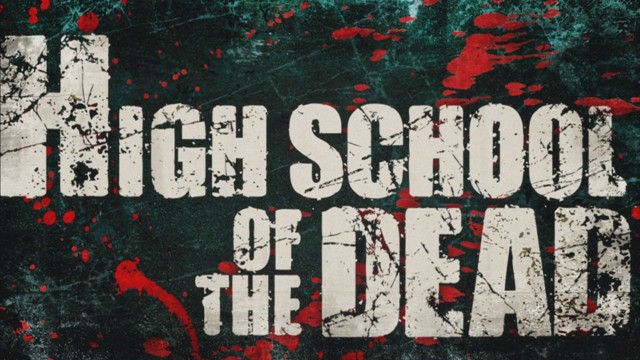 Well, isn't that convenient?  Subtlety, thy abbreviation is HSotD. 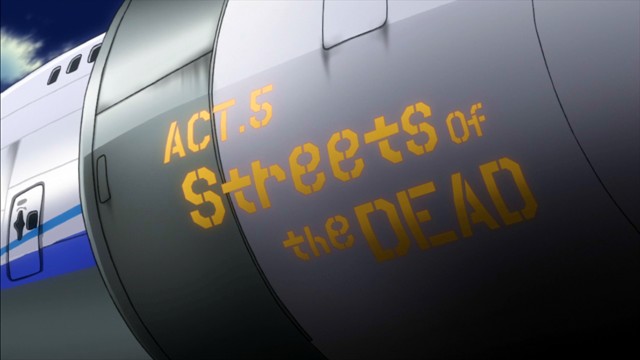 Seems an odd thing to have stenciled on the side of an engine housing.  I can understand "no step" or "Jet-A only" or "Always detach when replacing", but "Streets of the Dead" just doesn't make a lot of sense.  At least it's on the side away from the passengers.  Back in the city... 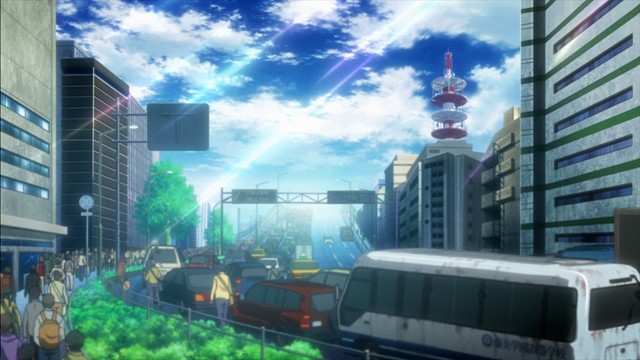 ...the bus carrying the larger portion of The Fellowship of The Ring Our Heroes (and Shiro's class, too) is stuck in traffic trying to evacuate the city.  Amazingly, no undead to be seen... you'd think they'd be all over this situation like a duck on rye bread.  The small police presence lining the street to seems to be doing the trick... for now.  Everybody is concerned for Takashi and The Preying Mantis' safety.  And rightfully so... 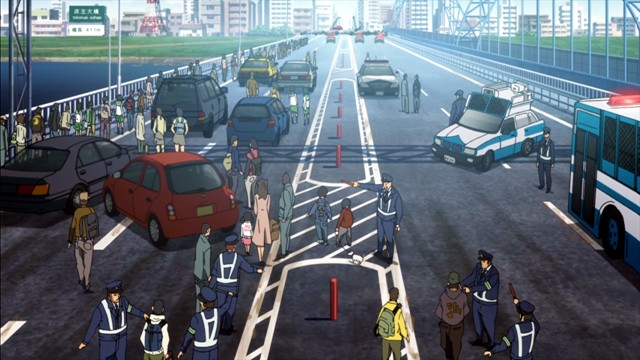 ...because they're stuck on the same side of the river as the others and every bridge they've come to has been blocked.  The police are trying their best to quarantine one side of the river from the other, and are in position with overwhelming force.  Nothing, and we mean nothing, living or undead, can break the quarantine... we guarantee it! 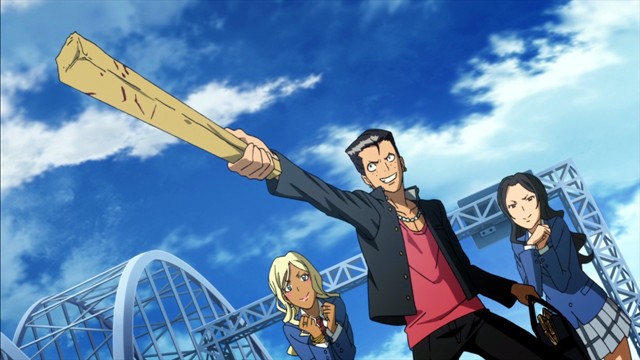 Pay no attention to the four delinquent teenagers over there.  To be fair, teenagers are more indestructible than cockroaches, and often enough just as pleasant.  Take, for example, the blonde Jersey Shore reject up there.  After her greasy-haired punk of a boyfriend, named "Hide~," knocks down a young, desperate mother, she ridicules her and trollops away... and yes, I'm aware that "trollops" isn't normally a verb.  It is now. 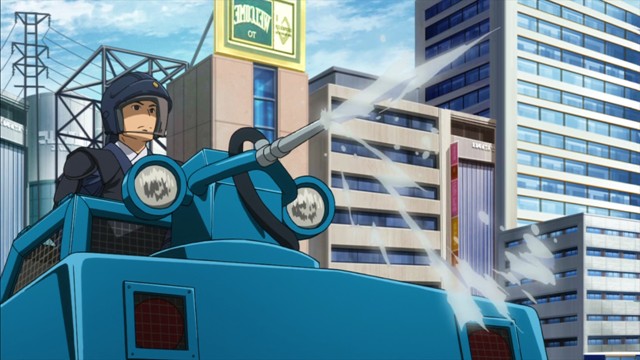 Gandalf Kobayashi in a different life... "None Shall Pass!"

While the correct way to deal with obnoxious teenagers should be with a flamethrower or a very large axe, the police have to be more restrained.  Yes, even during a zombie apocalypse.  So, water cannon it is, then! 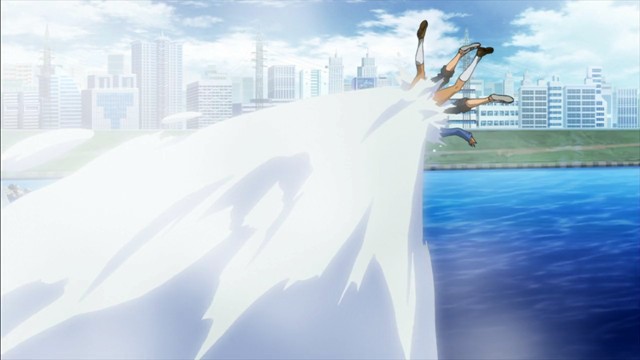 Unfortunately, they'll have to break out the containment booms to control the oil slick from his hair, but it's a small price to pay.  Yes, I'm aware that the river fish might disagree, but they don't have to deal with teenagers, do they?  I doubt that there are any delinquent catfish or punk trout in the wild.  A sturgeon with a fishhook in its lip doesn't count. 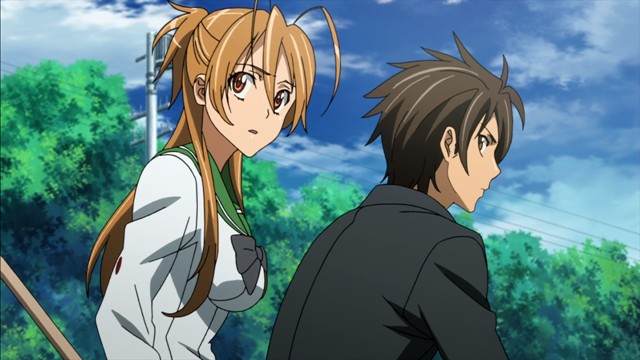 As I desperately search for more "irresponsible piscine" combinations (truant albacore?  reprehensible carp?), Rei and Takashi motor off, a little shocked by what they've just witnessed.  It's clear that they're aren't going to be crossing the bridges anytime soon (demeritorious herring).  Meanwhile, back on the bus... 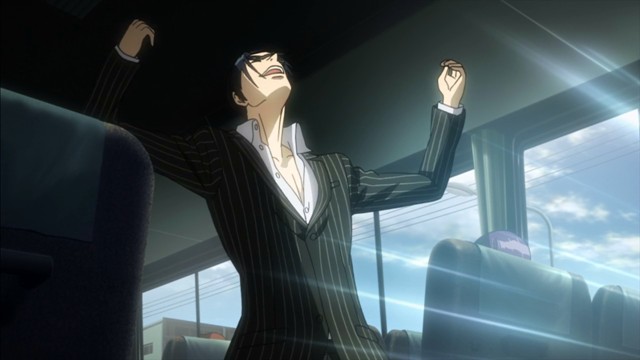 ...Shido-sensei is overacting overACTING!!!  He's also turned into something of a cult leader for his merry little band of dimwitted students (opprobious sea bass).  Obviously, Our Heroes remaining on the bus are less than fond of this development... and of his backdrop manducating.  It gets even worse. 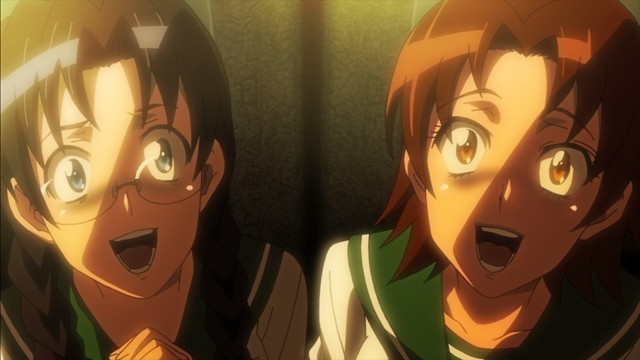 Remember, these two were normal everyday high school students yesterday.  Now they're drooling mindless drones, willing to bend to Shido-sama's every will.  YESTERDAY.  We're only on Day 2 of the zombie apocalypse.  This instant cult-follower change doesn't seem all that realistic to me... and yes, I know we're watching an anime about a zombie apocalypse.  I remain inconsistent, and shall stay so until my dying day.  Which means I'll be consistently inconsistent, which seems to be inconsistent with my belief system (hooligan nibblefish). 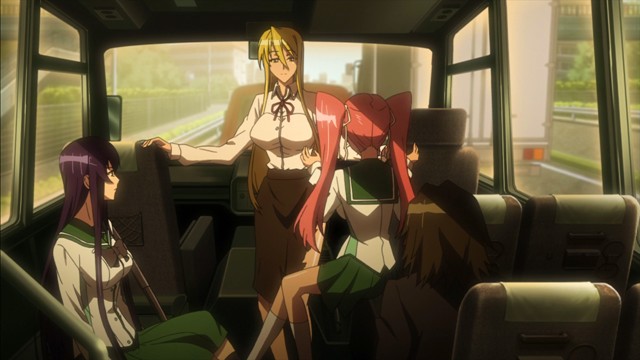 While Shido-kami works his magic over the peabrains in the back of the bus, Our Heroes decide that they've had enough.  They're gonna head towards another bridge on foot, maybe hope to meet up with the other two Heroes there... then they'll win the lotto as well.  Seems unlikely all around.  Shido, not as oblivious to his surroundings as his acting would suggest, notices that they're getting ready to vamoose and says that it'd be bad if Boing-sensei left... she has a responsibility to the kids on the bus.  Shido takes a threatening pace forward... 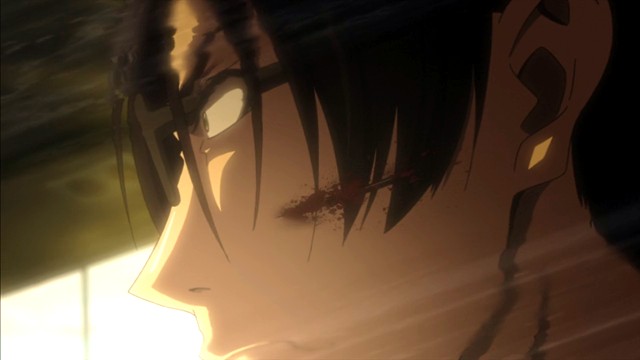 ...and Hirano stops him dead in his tracks with a shot from his nailgun that just grazes the teacher.  Suddenly in what might be the biggest moment of chest-thumping testosterone in a show full of them, Hirano goes from being a wimpy loser to a man who needs a wheelbarrow to haul his testicles around.  "It's not that I missed.  I did that on purpose.  How many corpses do you think I wrecked back at school?  You know, you've always treated me like crap.  I put up with it.  I put up with it for so long, because I wanted to be normal.  But I don't need to do that anymore.  Normal doesn't mean sh*t!  That's why... I can kill.  I can kill the living, too." 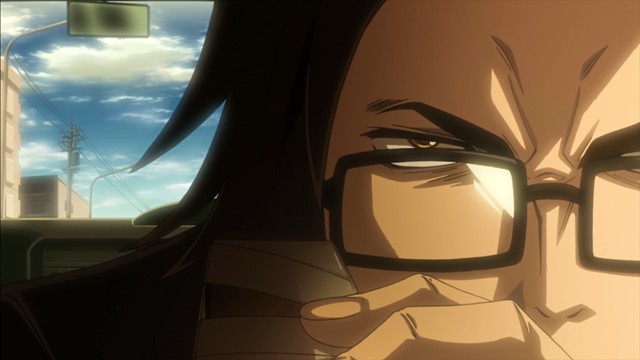 Everybody backs up a step.  Even Saeko is impressed.  And the larger portion of The Fellowship of the Ring Our Heroes exits the bus for parts unknown.  An angry Shido watches them, obviously plotting his revenge, rubbing his tentacles wound ominously (nefarious guppy).  Some time later... 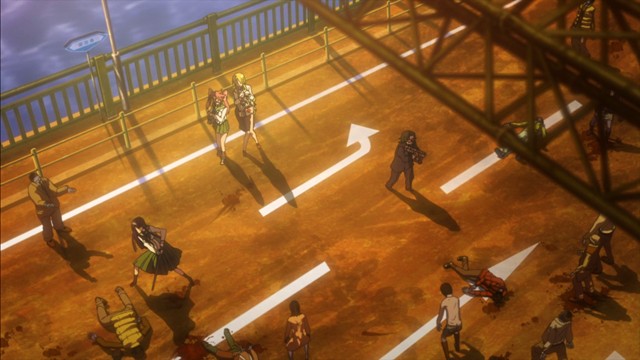 ...they've managed to get themselves ambushed by a horde o' zombies.  How, exactly, that happened is never explained, but I personally can't come up with any way it could have occurred except "the plot demanded it."  I mean, these aren't the newfangled fast zombies of 28 Days Later or The Walking Dead, these are the shambling horrors of the George Romero films.  In short, Our Heroes could have outrun them by sauntering casually in the other direction.  The situation worsens as Hirano runs short of nails, SFX-sensei falls on Takagi, suffocating her, and even Saeko starts to get a little down in the dumps.  When suddenly (cue appropriate music)... 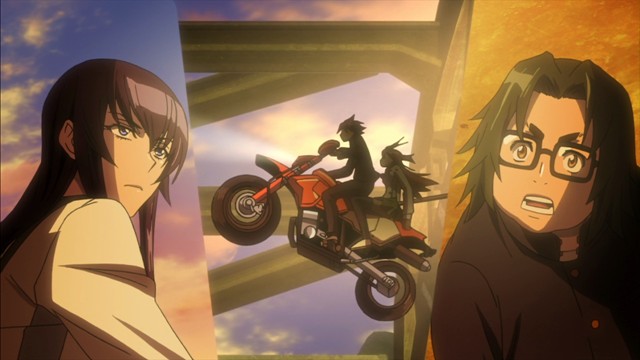 ...the Fellowship Our Heroes are reunited, and it feels so good (odious candiru).  Funny how they happened to show up at just the right time, isn't it?  Would you believe they heard the sound of the nailgun firing and figured it had to be Hirano?  You would?  Well, c'mon over, friend, I've got some swampland on a bridge in Brooklyn to sell you! 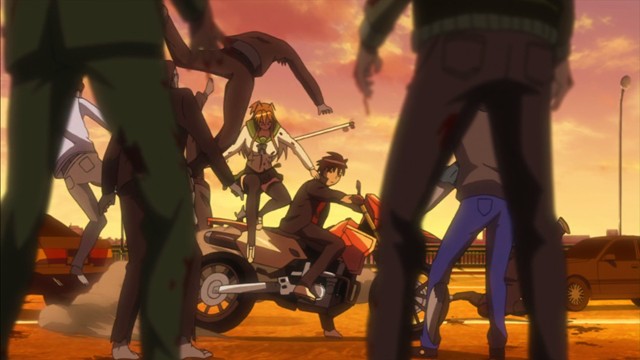 Let the asskicking commence!  As Takashi drives by, he flips his pistol (remember that from Ep04?) to Hirano.  Suddenly, it's Christmas in Hirano's world, and he just got the Red Ryder BB gun he's always wanted. 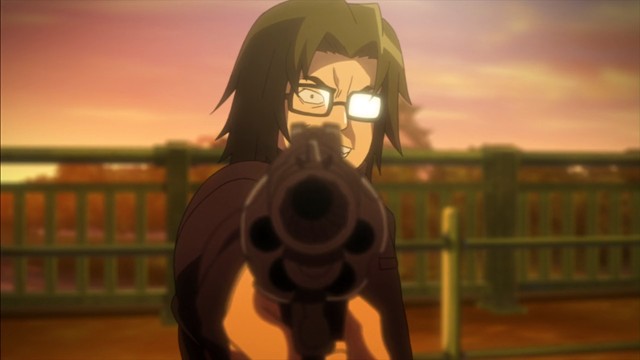 Somewhere, Chuck Norris is wetting himself with fear over the AWSUMNES that is Hirano. 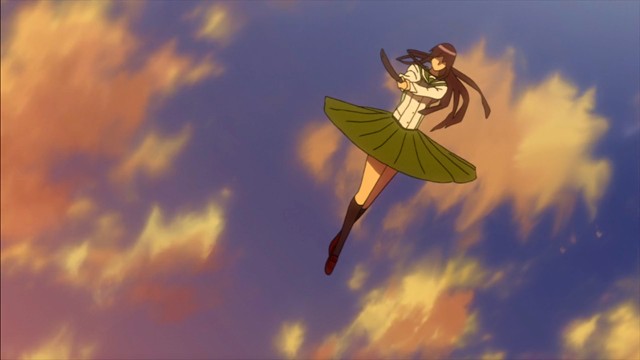 And even Saeko gets a motorcycle-assisted boost into a spinning attack that wipes out half the zombies in the city.  Gotta admit, that's pretty stylin' right there.  After getting caught up with how both groups came to be at this spot at this time, Boing-chan reveals that they're very close to a place they can rest.  It's a two-story apartment within walking distance, owned by a friend of hers who often travels for work... and back at the airport, a sniper sneezes.  After a short walk... 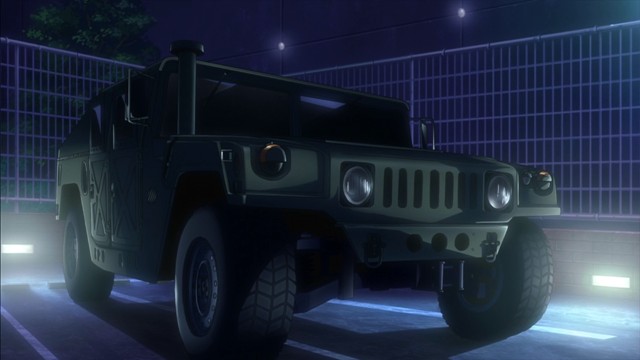 ...they find Humvee-kun parked behind a secure gate, which also protects the apartment complex.  Unfortunately, said gate also trapped some zombified residents inside. 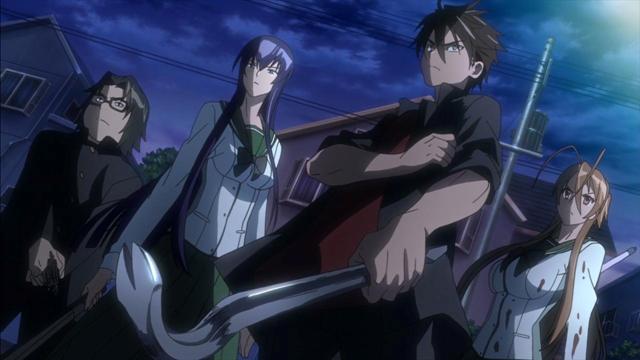 And for once, the Fellowship does more than just stand their ground or run away.  Instead, they take the fight to the mindless hordes of students zombies.  Fade to black, roll credits.

GOOD episode this time.  The show runs a lot better when Our Heroes are together; they're a better ensemble than they are individuals.  Of course, Hirano's conversion to badassery is about as epic as it can get.

FANSERVICE SHOT OF THE WEEK: 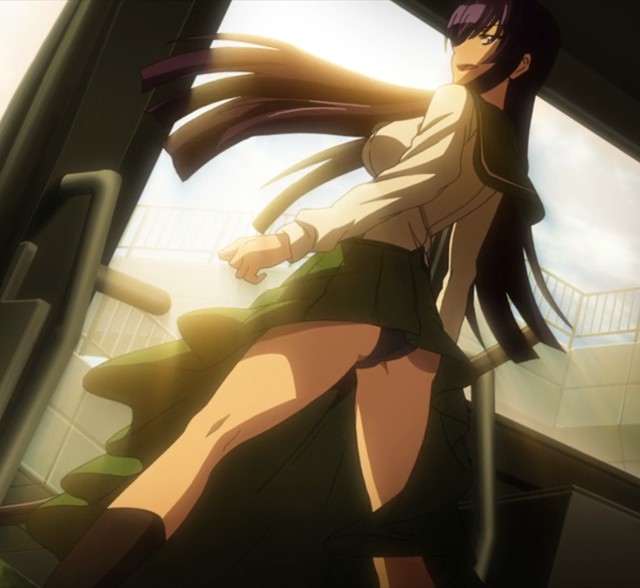 1 Slight correction, it's still DAY ONE of the Zombie Apocalypse.  But on the other hand, one gets the impression that Shido-sensei is very well-practiced at developing a cult of personality, and this IS his class, after all.

2 Mauser, allow me to direct your attention to the very first picture of Ep04's writeup.  Please note the text at the bottom of the picture.  The production staff, the authors of the manga, and the duck that's writing these posts disagree with your assessment of what day it is.

3 Doh!  You're right.  While  Takashi and Rei got to spend an evening together, I guess I was thinking in terms of the crew on the bus, who apparently had a completely uneventful night.

4 Losing track of what day it is turns out to be an early indicator zombie-syndrome...

By the way, I am thinking of changing my screen name to one of your fish-pairs.  How does "Nefarious Guppy" fit me?

5 I was quite amused by "hooligan nibblefish," but "nefarious guppy" is good too.