High School Of The Dead Ep04 If my memory is correct, last episode Our Heroes escaped from Zombie High in a mini-bus.  Along the way, they picked up Mr Shiro (a devious teacher) and what survivors from his class that remained (lickspittle whining toadies).  At the end, Rei and Takashi leave the mini-bus, then are separated from the rest of the cast by an exploding busload of flaming zombies.  They go on to find a motorcycle and head for the city.  Then they find a F-4 Phantom II and take to the skies! 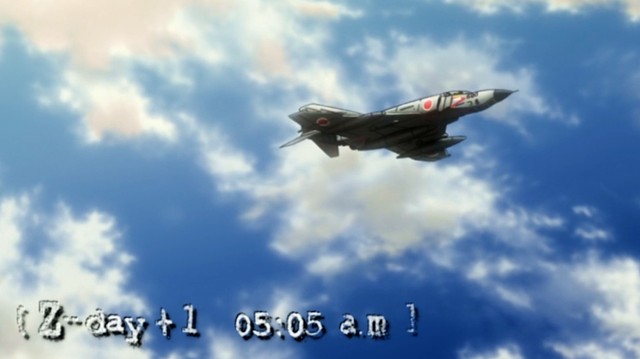 ...or the JASDF has made an appearance, one of the two.  Interestingly enough, a small amount of research indicates that the plane, probably a RF-4EJ, didn't take off in Japan proper.  Instead, it almost certainly flew from Okinawa, home of the Southwestern Composite Air Division, which is the only unit of the JASDF to fly the recon variant of the standard F-4.  So one could posit that, while the rest of the world is being affected, there are still some places that aren't.  Okinawa, for example.  The Falklands, certainly.  One could continue to speculate, but that's not the point here.  The point is, the authorities are trying to figure out what's going on 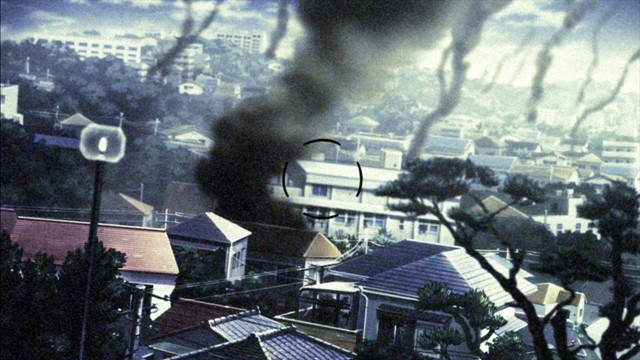 The picture isn't good, at least in this city.  I don't know that I would have expected fires to have broken out like this so quickly, but maybe it's the result of all those incendiary undead from last episode.  Are there armor-piercing zombies, too?  However, all hope is not lost. 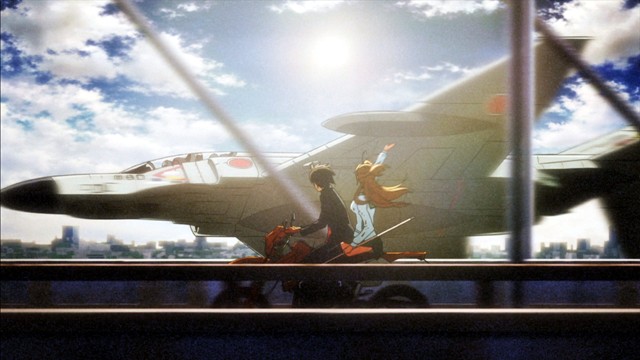 For where there is life, there is hope.  Even if said life is a pair of teenage kids riding a motorcycle without helmets or even a license between them.  While I commend the pilot for his exciting flying, does the show really expect us to believe that the Japanese don't make a camera that's got a halfway decent zoom lens on it for their recon aircraft?  I mean, really?  Do the names "Nikon", "Minolta," "Konika", "Pentax" or "Canon" ring any bells? 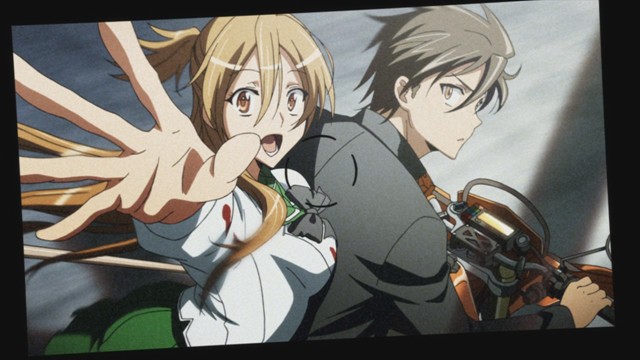 Whatever they've got, it's got one heckuva fast shutter speed to be able to take blurless photos with the combination of the aircraft's velocity and the distance to the aiming point being so ridiculous.  At least the backseater's got decent taste in where he's got the camera focused. 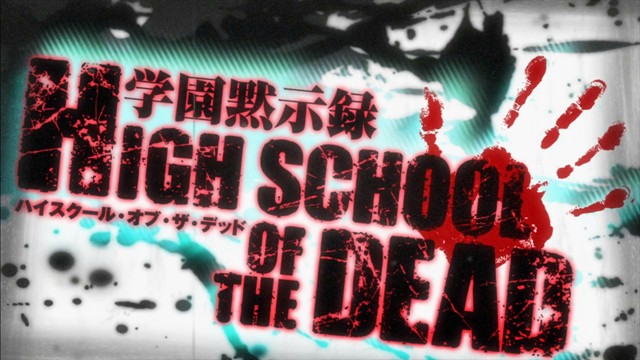 But then again, this IS High School Of The Dead... what else would we expect? 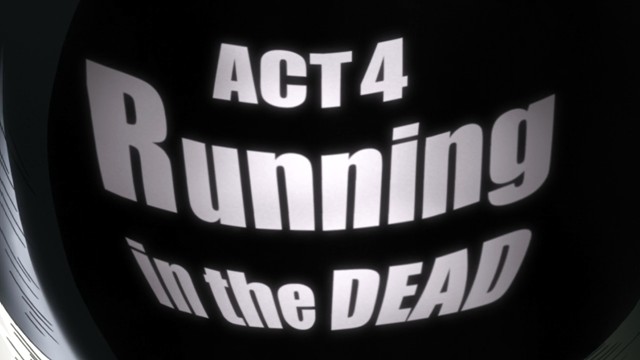 The newest song by Adele

So what wonders does HSotD bring us after that rather exciting opening sequence?  A massive set-piece battle, with the JSDF on one side and a zombified Tokyo on the other?  A no-holds-barred fight to the death between Our Heroes and two zombie Sumo wrestlers?  The ominous spectre of an undead Hello Kitty vs... wait, actually, that last one is pretty frickin' cool. 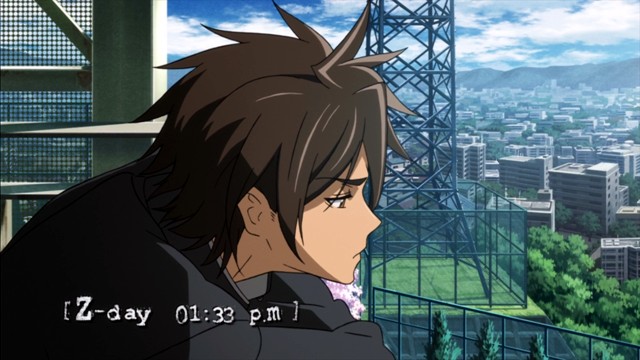 Nope, it's FLASHBACK TIME!  YAAAAAAAAYYYYYYY!  We get approximately seven minutes of recap covering the past three episodes... which makes me wonder just what sort of attention span the producers think the audience for this show has?  Once we finally make it back to stuff we haven't seen before... 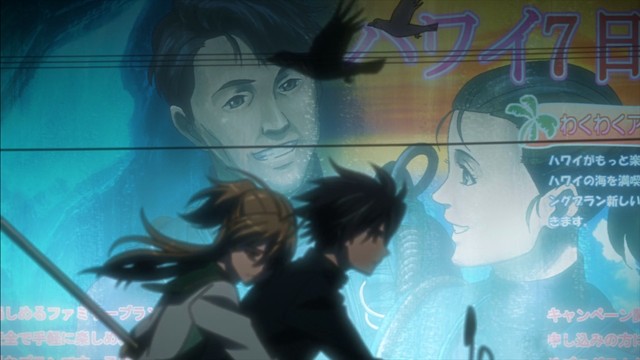 ...it's just after midnight on Z-Day+1, and the Preying Mantis and Takashi motor their way through a city deserted.  Only birds, cats... and evidence of violence all around.  So, kinda like Lexington, Kentucky, except with fewer zombies.  Oh, and with an opera singer providing the background music. 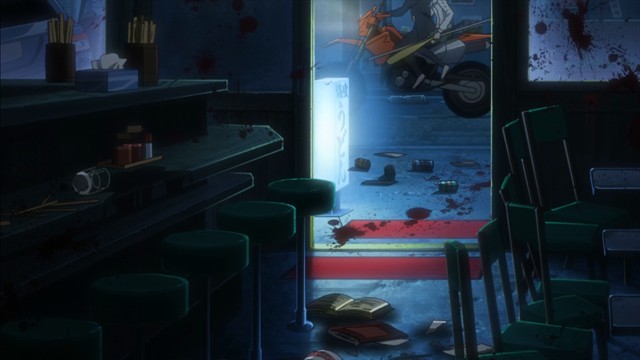 Everybody's fled... or dead.  The director pulled out all the stops to make the scene as powerful as he could, and it shows.  Even Rei and Takashi are looking depressed... until they come down the street and see a police car half-hidden behind a corner!  Hooray!  They're saved! 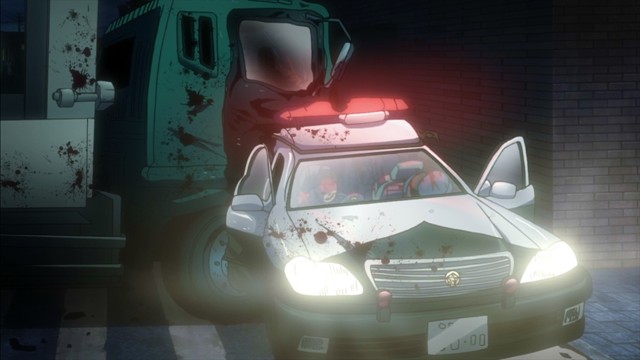 Now wait just a cotton-pickin' minute!  How in the world did this happen?  Zombie passenger attacked the truck driver?  Right, fine, but how come the police car didn't, y'know, drive out of the way?  Or were the cops already dead somehow?  And how come the two police officers are thrown forward in their seatbelts?  There's no visible damage to the front of the car?  All in all, I'm just totally confused.  Even Takashi expresses disbelief, and you know that when the cast starts to think that the show is being particularly unfair, you're beginning to wander into Rio Rainbow Gate! territory. 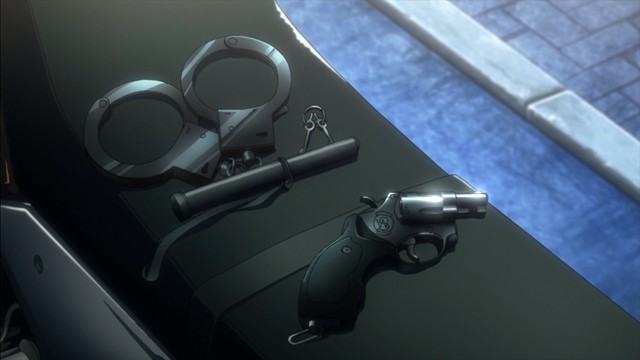 The Preying Mantis, on the other hand, rifles through the pockets of the two unfortunate men.  One gets the feeling she's had plenty of experience with doing that.  She comes up with a S&W Model 37, a collapsible nightstick, and a pair of handcuffs.  I'm not sure I want to know.  Takashi gets the gun, even though all he knows about them is what he's seen on cop shows.  So he'll probably shoot himself in the elbow before the episode is over.  But first... 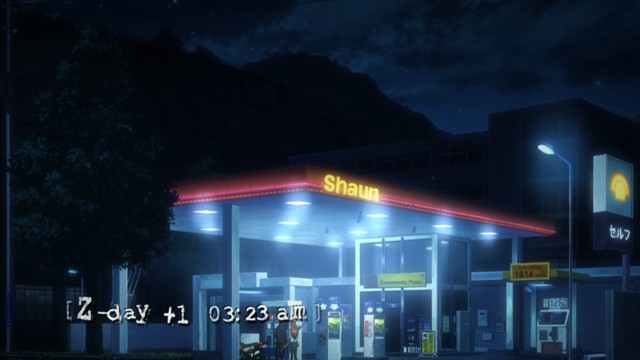 ...they need to stop and gas up the motorbike.  Best sight-gag of the show, if not the best in years, right there.  Anyway, there's a problem.  It's a self-serve station... they need to either swipe a credit card (which neither of them have) or feed cash (which neither of them have) into the pump.  No pay, no gas.  So, Takashi picks up his baseball bat, tells Rei to scream if she needs him, and goes off to do what we all want to do these days. 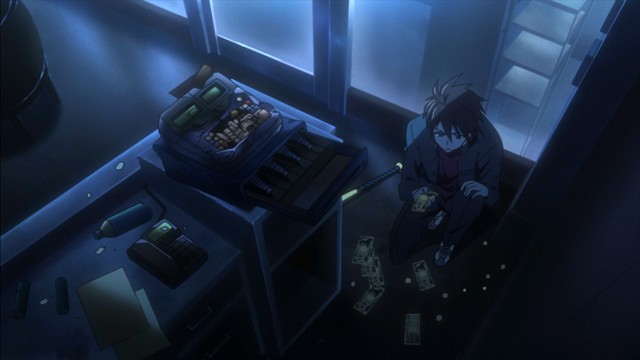 With a smile on his face, he beats the everlovin' crepe outta the cash register.  Unfortunately, in the middle of his revels, Rei lets loose with a scream that'll draw every zombie in the country towards them.  Scurrying outside, expecting to find a horde of undead chewing on her antennae, he finds instead... 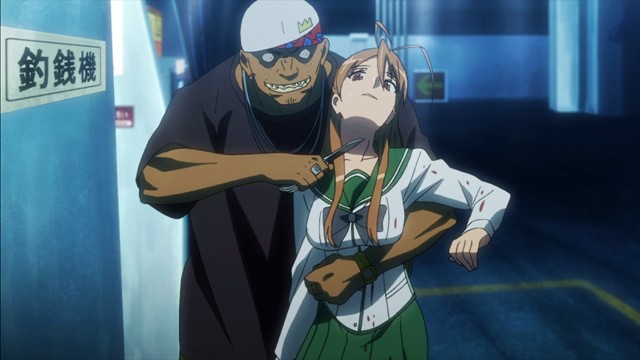 Ohferpete'ssake... okay, look.  You've been running from zombies all day, you're outside, surrounded by parking lot, and you're alone.  I would think you'd be so hyper-alert that your own damn shadow couldn't sneak up on you, let alone... whatever that is.  The only excuse she might have is that she was tired, and to hell with that.  That's when you need to be even more carefully aware of what's going on around you, not less.  It turns out that the guy, who we'll call Bob, is a bit insane.  But, as he points out, he's got a good reason for it.  He watched his entire family, from Granny Bob to lil' sister Bobette, turn into zombies right in front of his eyes.  Of course, he also had to crunch their skulls in, too.  I feel some sympathy for Bob.  Not much, but some... it's hard to have a lot for someone who dresses like that.  He does have a few braincells, however. 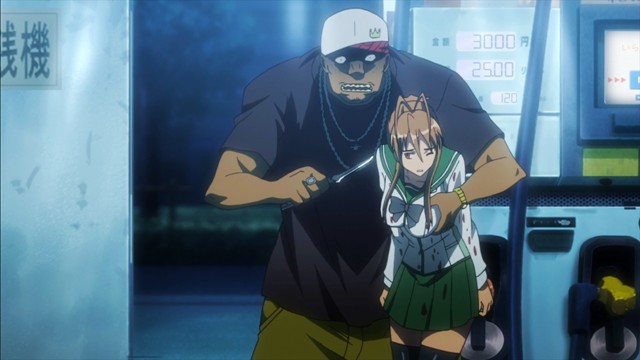 He tells Takashi to a) throw away the baseball bat and 2) refuel the motorcycle.  If he does those two things, Takashi will live... or at least, he won't be killed by Bob.  Bob and Rei will go off and form their own team.  Our Hero complies, the *ping* of the bat drawin' all da zombies to the yard.  Takashi then tries to open a dialogue with Bob while he pumps the gas... maybe get him to lower his guard.  Nothing seems to work; Bob keeps telling him to shut up... while waving the knife around.  In the middle of one of these grandiose waves, Our Hero charges... 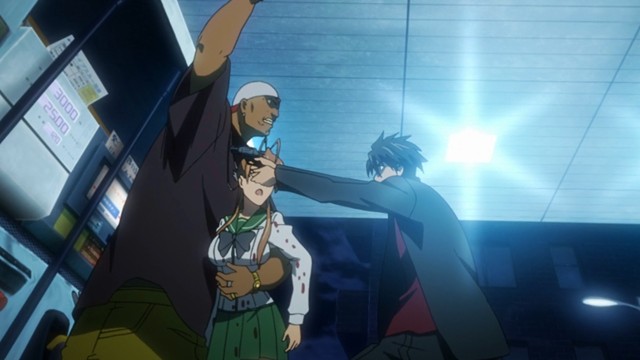 ...while drawing the S&W Model 37.  Bob stammers a bit, then quite reasonably asks "what if it ignites the gasoline?"  Takashi growls back "it's better than giving you my girl."  Bang.  Bob falls to the ground with a wound in his shoulder, screaming in pain.  While Rei would like nothing more than to beat the snot outta Bob with her collapsible baton, Our Hero points out that they just made a lot of noise and they don't have time to stick around.  The lightbulb goes on in Bob's head... "you're just gonna leave me?  You can't do that!" 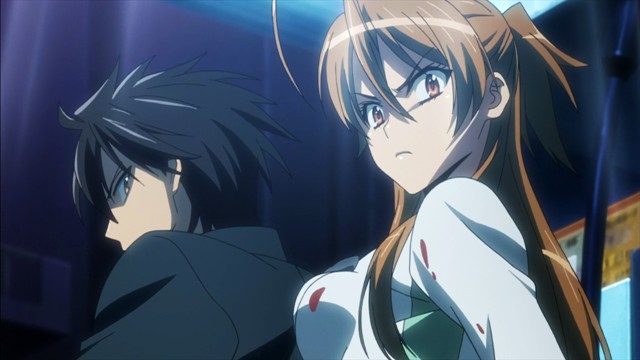 Exeunt Bob, pursued by a bear never to be seen again.  Meanwhile, a RF-4EJ lifts off from Okinawa, and Our Heroes realize that they just killed a man, they'll probably have to do so again in the future... and that possibility doesn't seem to faze them much.  And it's only been one day since the Zombie Apocalypse started!  It's on this sombre note that we fade to black and roll credits.

Short episode this time around, since a quarter of it is flashback.  What new stuff there was, though, was pretty important.  Takashi and Rei haven't just crossed the Moral Event Horizon, they leaped over it with both feet.  In the few seconds that we got to spend with the other half of Our Heroes, we saw that Mr Shiro is a creep as well as a devious teacher.  Something's gonna go down, and it's gonna be soon.

FANSERVICE SHOT OF THE WEEK: 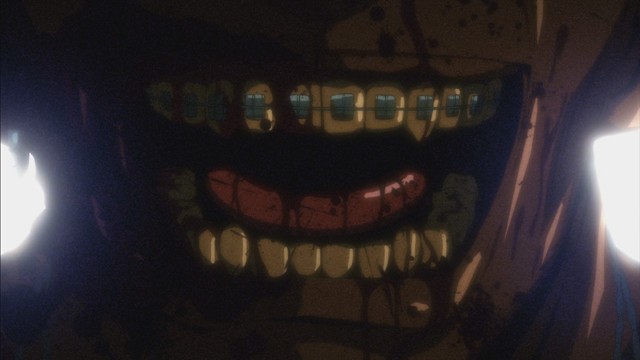 AHHH!  GEEZ, Bob, you really are a jerk, aren't you?  Meanwhile, I can hear the mob outside Pond Central, what with their pitchforks and torches.  Okay, okay, just click "spoiler" to get the real Fanservice shot. 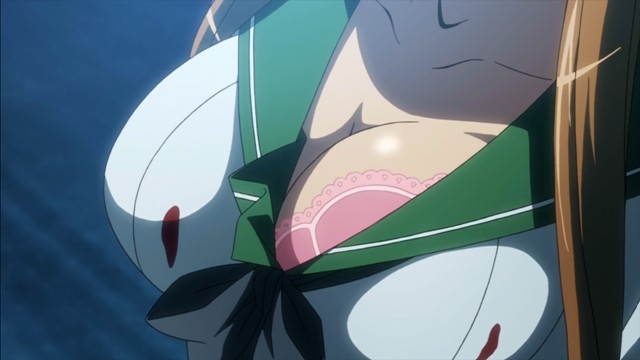 2 Here's another headscratcher regarding that cop car--was that little revolver the only firearm the cops had on them?  I don't know how much firepower Japanese police officers usually carry on patrol, but in almost any other country in the world, you'd expect at least one high-capacity semi-automatic pistol per officer, with two or more spare magazines (lots of ammo, which would come in handy in a Zombie Apocalypse situation).  There might also be a shotgun, or even an assault rifle, stored somewhere in the cruiser itself.  (Mind you, someone else may have pilfered all the good stuff before Takashi and Rei came along.)

3 Peter, you aren't seriously trying to look for things like logic, and consistency, in a show about zombies, are you?

4 The Preying Mantis does state that there was another pistol, but it was "unusable".  I assume that's a euphemism for "there was a crankshaft in the barrel."

I can't seem to find anything online (in English) on what weaponry is stored in the car itself.  My guess is "not very much," but that's just a guess.

5 I thought that your average policeman in Japan was actually very lightly armed?