Four More First Episodes With the Summer Anime season in full swing over in Japan, of course I've been watching.  In my first post, I came up with three keepers and a possible fourth.  This time around, let's look at four more series and see what shakes out, shall we? 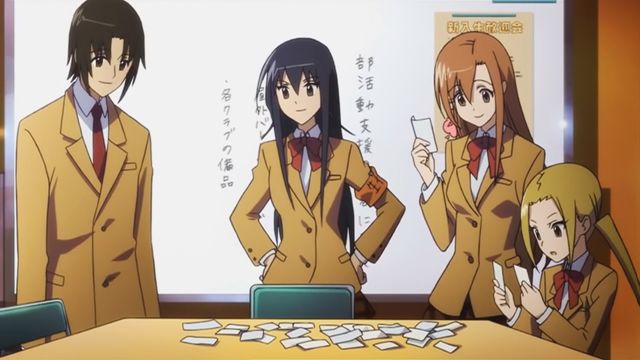 An all-girls school has gone co-ed and allowed males to attend.  The president of the student council decides that it'd be smart to hear the guys' side of things and brings a reluctant member of the male sex on board.  Hijinks ensue.  Hm... where have I heard that plotline before?  Oh yeah, Seitokai no Ichizon from the fall of last year.  The difference between the two is pretty clearcut: Ichizon was funny.  Yakuindomo thus far has failed to provoke any laughter from me, unless you count the ability of the short one on the right to punch in her sleep, but there's just barely enough hints that it has some funny in it to get me to watch Episode 2.  It better be side-splittingly hilarious, though. 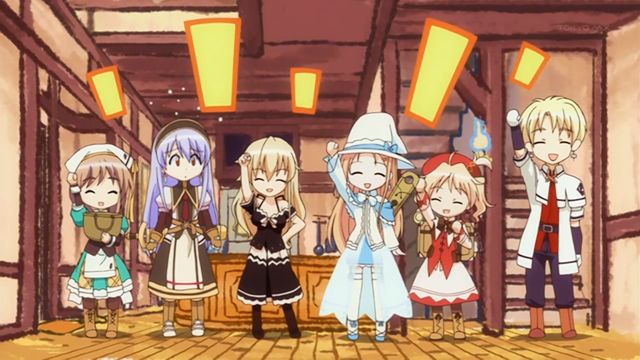 "We're in a crappy fantasy anime based on an eroge!  Yay!"  Other than the dancing mechanical penguin, there was nothing even remotely interesting about this one.  I regret the loss of the 24 minutes I spent watching this when I could have been doing something useful, like dusting my duck collection or picking lint out of my feathers. 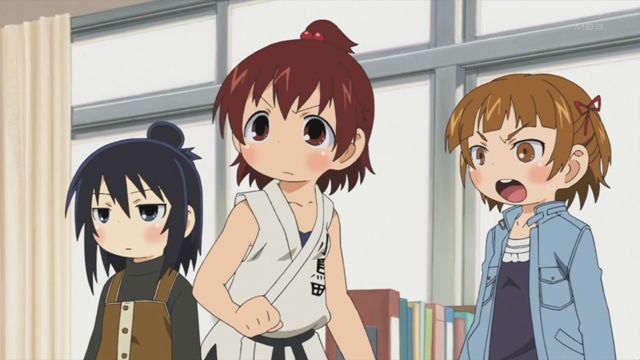 A darkly evil bookworm, a dumb martial artist and a sadist walk into a room.  ("What is this, some kind of joke?") They're sisters.  They're something around 10 years old.  They terrorize their teacher, their classmates, and any viewer with a sense of self-worth.  That's Mitsudomoe in a nutshell.  Hey, let's kick the teacher in the groinacological region so the nurse will treat and fall for him.  Let's name a hamster "Nipples", tee hee!  We're so naughty.  Gosh, that's some funny stuff right there.  Supposedly this is the hot show this season, with many of the bloggerpeople going nuts over it.  Either they watched an entirely different show than I did, or I weep for their low standards. 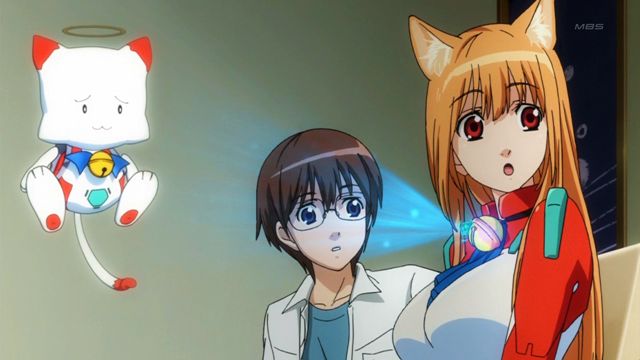 Okay, let's see if I got this straight.  Hot Alien Catgirl crashes her ship on Okinawa, makes her way to a local neighborhood, befriends Average Anime Guy.  His three female friends, all of whom are hot themselves, get perturbed about this.  Standard Harem Plot #4, what's interesting about that?  Two of the three friends are members of different "secret societies," both of which know about Alien Catgirl and are out to either a) capture her for their own ends or b) eliminate her.  The third is a member of the military, has the ability to make guns appear out of thin air, is ruthless and cold, and has the hots for Average Anime Guy... and is tasked to wipe out Alien Catgirl and everybody who's met her.  Including Average Anime Guy.  At the beginning of the episode, Average Anime Guy was looking like the main character.  By the end, though, I wasn't so sure anymore, and in fact I haven't the slightest clue who is.  Okay, now that's different.  The art for Asobi is good and clear, there's some action, and the girls are all cute as the dickens.  Definitely goes on the "To Watch" list, with high priority.

Well, one out of four ain't bad.

1 On out of four is pretty terrible.  But still ahead of Sturgeon's Law.

2 Funny, I just watched Asobi ni Iku Yo last night. With all the "boing-oing-oing" nonsense I was expecting to be put off by the end of the show (action-packed opening sequence notwithstanding) but... there's something very odd going on, and I'll give it a couple more episodes to find out what, or to at least hook me in to the full ride.

As for the others... forewarned is forearmed, methinks. Thanks for the warning!

3 Looks like I'm going to love the anti-Ichizon. As for the rest... pistols at dawn, I guess.

I'm really liking Mitsudomoe and Seitokai Yakuindomo, but them I've got a dirtty mind and like a bit of innuendo.(the pres in SYD reminds me a bit of Tomoyo from Clannad too for some reason)

5 I watched the first episode of Asobi ni Iku Yo, and while it didn't grab me I'll at least give it another shot.

Mitsudomoe is outright bad (and they forgot to animate half of it); I turned it off after ten minutes.  And while there's nothing objectionable to Shukufukucamponuku, there is no reason to watch it either.  It's competently drawn and animated, but the writing and direction are just painfully clumsy.

6 I dunno, man, are you confusing Mitsu with something else? There's more movement in one eposide of it than in 3 episodes of Haruhi. This includes rather complex gestures and hairstyles.

7 Yeah, but they only do two frames for each scene.  Blip-blop-blip-blop.