Four First Episodes The Summer 2010 anime season has gotten underway over in Japan, and I'm rather optimistic this time around.  In the Spring, I wound up following only two shows: Angel Beats and K-On!!, with a third, Ichiban Ushiro no Daimaou, ending up on the shelf after I watched half.

This season, though, I'm already hooked on four series, and there are two others that I haven't had a chance to watch yet.  Let's take a look, shall we? 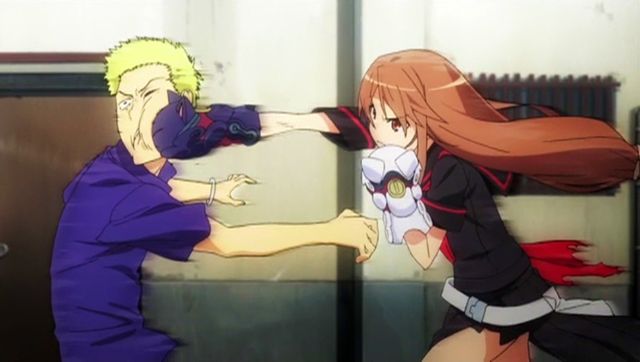 We've heard variants of this plot before: a semi-secret club in high school solves student problems, they bring on a new member who has a thing for the strongest member, a cool girl, yadda yadda yadda.  Granted, it's nothing original.  This show, though, has one thing going for it: the Narrator.  Voiced by the same seiyuu who did Kuroko in Railgun, she's a wisecracking letch.  Unfortunately for her, she can often be heard by the rest of the cast, who often shoot nasty glances at the screen.  While it sounds stupid, it's actually works quite well and hasn't failed to get a chuckle out of me yet.  The main character, Ookami (above right), looks exactly like Taiga from Toradora, only taller and slightly more violent.  And, hey, she uses cat-shaped Power Fists, too... how can this be bad?

Well, easily.  The new guy could never get a grip on his painful shyness (when people make eye contact with him, he curls up in a little ball of fear), which to my eyes has already hurt the show, just in the first episode.  Another way this show could screw up is if it follows a "problem of the week" format without spending enough time on the main characters' development.  I mean, fine, Susie Stalker has a thing for the hero of the tennis team and wants to stop him from quitting due to injury.  Great, nobody cares except for how it affects the members of the club.  Don't spend 10 minutes explaining how Susie and Bjorn Borg met... just get to the problem solving.  As much as I enjoyed the first episode, if I need to drop a show for time reasons, at the moment Ookami-San would be the first on the chopping block.  Hope I don't have to though, because I can already see the potential of this being quite good. 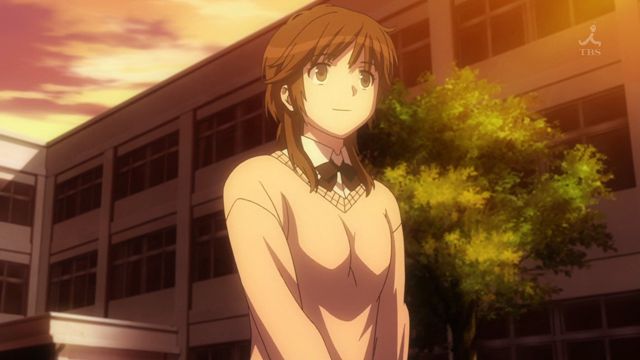 Based on a PS2 dating sim, Amagami SS might just have been the show I was most looking forward to when I heard about it... or, more correctly, saw the promotional art for it.  It bears a startling resemblance to the show Hatsukoi Limited, which  was chock full of cute girls doing cute things... and provided some of the best fanservice I've seen in years.  At least after the first episode, it looks like Amagami SS is going to be doing it's level best to keep up with Hatsukoi.  Perhaps not as over the top at the other show, but that's okay too.

The premise of the show is going to be either it's strong suit or it's weakness.  In 2007, an anime was made of KimiKiss.  That was also based on a dating sim, but it invented multiple male characters to pair up with the various females, so the entire story was told at the same time, if that description makes sense.  That's how many shows based on dating sims do it, with the rest only following one girl's "path" while the girls become secondary characters (see Kanon '06 or Clannad for examples).  Amagami SS, though, isn't going to do it that way.  Instead, the show is going to play it straight, with each of the six girls getting to be the main character.  I assume that the show will reset to the beginning each time.  It'll be interesting to see if it'll be able to keep the viewer's interest through all six, or if it'll just get stale after a time.

High School of the Dead 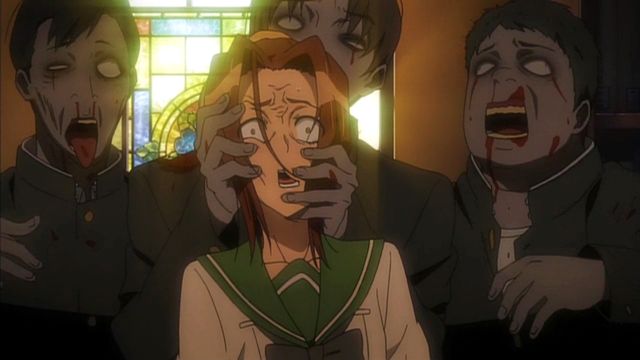 I first heard about the manga High School of the Dead a few years back, just as I was finishing Max Brooks' World War Z for the first time and immediately marked it as something I wanted to read.  While I never did get a chance to read the manga, the concept was pretty obviously going to be turned into an anime.  I mean, c'mon, high schoolers trying to survive the zombie apocalypse?  That's nothing but pure gold, baby!

It appears that the production company, Madhouse, has decided to concentrate less on the "survival horror" aspect of the show (which has already been licensed by Sentai Filmworks, which seems appropriate since it's the reanimated corpse of ADV), and more on the fanservice.  While I'm hardly one to complain about that, it is a bit disconcerting to see a gratuitous pantyshot on a cute girl that's being mauled by the living dead.

And make no mistake, there was a lot of that in the first episode.  The artwork seems a little uneven, bouncing between more-or-less realistic and near-Eiken levels of Boi-oi-oi-oing!  Unsurprisingly given the subject matter, the overall atmosphere of HSotD is dark and grim, and that might be rather stifling over time.  But for now, it'll do until the movie version of World War Z comes out (allegedly in 2012). 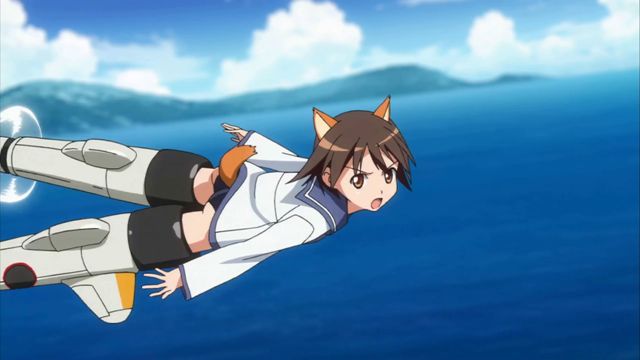 There is nothing I can say that'll make any difference about any person's reaction to this show.  If you liked the first series, you're going to like this one, because it's simply more of the same.  To me, this is not a bad thing in the least.  I think the artwork has been improved, however.

The show is set about six months after SW1 ended, with the alien Neuroi returning and the whole war starting over again.  Instead of the Akagi taking our two Japanese heroes to join the British-based 501st Strike Witches squadron though, they take an Kawanishi H8K "Emily", with the Yamato sailing after them.

Yep, still a ridiculous amount of detail spent on the military hardware in the show.  One thing that really made me laugh out loud was the improved Japanese Striker unit... the Shiden ("Violet Lightning"), replacing the previous Zero version.  Of course, the Shiden was also a fighter plane in WWII, the Kawanishi N1K2 "George," probably the best Japanese fighter of the war.

I fully intend to revel in the ridiculousness of Strike Witches 2, no matter what.  I'm sure some out there are complaining about the usual things ("Where are the pants?"), but I don't care.

So those four shows are the ones I'm definitely following this season... maybe we'll even get a Ducks In Anime out of one or two!

1 If I find you a duck in Mitsudomoe, will you join the dark side?

2 That's one of the two shows I haven't had a chance to watch yet, Pete...

3 Same choices as me, though I'm also liking Mitsudome and Seitokai Yakuindomo too.

4 I've been enjoying Amagami a lot so far.  It's sufficiently off-kilter to keep things interesting.