F1 Update!: Monaco 2013 Monaco is one of those circuits where you can always expect to have a not-dull time.  Oh, the race itself may not be any good, but you're practically guaranteed to have an experience.  So when the Circus formed up on the grid under a brilliant blue sky, the F1U! crew settled back in their comfychairs, Chicago-style pizza from Giordano's at easy reach, ready to experience a race around a tiny French fishing village.  THIS is your F1 Update! for the 2013 Grand Prix of Monaco!

*LIGHTS OUT:  Despite a desperate lunge by third-sitting Red Bull driver Hannibal Vettel, the two Mercedes cars on the first row kept the lead through Sainte Devote.  This allowed Nico Rosberg to begin to pull away while Shiv Hamilton played 'good teammate' and held up the rest of the field... as predicted by many.  At any other circuit on the calendar except maybe Singapore, this strategy couldn't work: too much room.  But at Monaco... narrow, twisty Monaco... the possibility existed that a determined and skilled pilot could make it work.  You may say what you want about Shiv Hamilton, heaven knows we have, but after Mercedes gave him a podium he didn't deserve at Malayasia, he was both skilled and determined to give back to his teammate.  So Shiv put on his Jarno Trulli Memorial Engineer cap and began to lead the train through the streets of Monaco.  For nigh on 30 laps, Rosberg held close to a five second lead over third-place Vettel, and it was clear that Mercedes had figured out the tire problems that had plagued them all season.  The train continued on, until Ferrari's Felipe Massa had a moment.

*SAFETY CAR:  During Saturday's third practice, Massa wound up skidding into the barriers at Sainte Devote, damaging his car so badly the team could not get him up and running in time for Quals.  Now, on Lap 30 of the race, the same thing occurred.  Indeed, the two incidents were so similar in appearance as to be a little frightening. 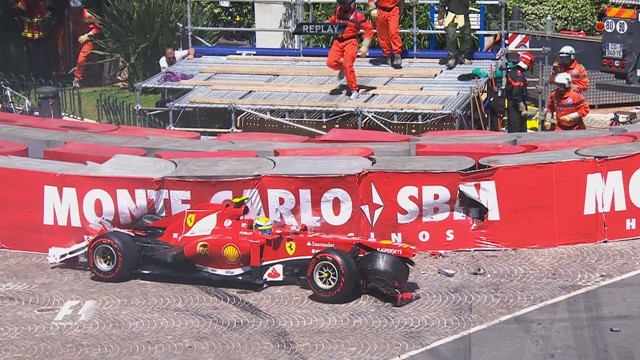 If anything, the result of this one was even worse.  Massa was put into a neck brace and taken to Princess Grace Hospital, where he was held for a few hours and released.  However, the long trail of broken car left behind by his inelegant departure from the race could not be cleaned up safely, and we got our first Safety Car of the year.  The two leaders, halfway around the track from Berndt Maylander, immediately lean into the gas pedals and rush for the pits.  At this point, Mercedes told Shiv Hamilton that they were going to pit both cars on the same lap, and that he needed to hang back a few more seconds so the team didn't stack them up in the pits. This he duly did, and he pulled into the pit stall vacated by Rosberg a mere eight seconds previously.  This turned out to be just a couple of seconds too long, as while our Polesitter retained the lead, Hamilton exited the pits in fourth, leapfrogged by the two Red Bull drivers.

*PART II:  As the drivers perambulated behind the Safety Car, we got to hear a call from the pitlane to Hannibal Vettel: his rear tires were "marginal" after his first stint, while Rosberg's engineer told him that he still had "half the life" left in his after his stop.  That couldn't have been an encouraging call for the Red Bull drivers, but when the Safety Car pulled in on Lap 38, the field gamely set off after the leader.  After one lap, Rosberg had a two second lead, making it looked effortless.  It wasn't until Lap 45 that something happened to shake things up.

*RED FLAG:  Back towards the rear of the Thundering Herd, Cardinal Maldonado was having a lousy race.  To be sure, they'd all been lousy this season, but this one seemed particularly bad, and it wasn't about to get any better when he approached Tabac.  Max Chilton's Marussia, not exactly known as a speedy vehicle was inside him, looking to pass... and pushing him very very wide in the process.  Maldonado, best known for being a dangerous driver last year, moved over as far as he could to avoid contact, but the rookie kept coming... and coming... and coming... and... 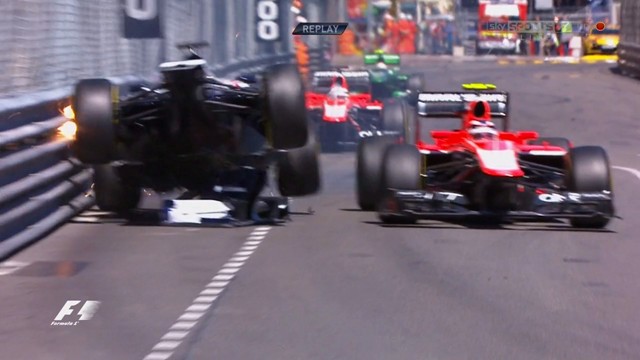 The Williams was launched skyward, greatly reducing grip, before slamming at high speed into the TecPro barrier hard enough to peel it away from the steel Armco, leaving it curled in the middle of the circuit... right where Chilton's teammate, Jules Bianchi, could run into it.  This he duly did, ruining the front of his car.  A red flag was immediately displayed, halting the race on the spot.

*ENDGAME:  The remaining cars came to a stop on the grid while the damaged barriers were replaced.  Tires were changed, minor damages were fixed, and people tried to figure out just exactly how to get past Nico Rosberg.  Once the race was restarted, it was clear that nobody had figured that part out, as the Mercedes driver ran himself back out to a four-second lead, holding there until another Safety Car was brought out (see Moooooo-oooove of the Race, below).  The restart did nothing to help the situation as Rosberg owned the restart and was right back to a four second lead almost immediately.  Just how frustrating the race had been for Hannibal Vettel became clear on the penultimate lap, when he set fast-lap honors.  When his team told him to back down, you get no points for fast lap, he replied "...but satisfaction."  That was the only real satisfaction to be had, as he finished behind Rosberg by 3.5 seconds.  In an interesting bit of synchronicity, it was in 1983 that Nico Rosberg's father, Keke, won the Grand Prix of Monaco.

*DRIVER OF THE RACE: Nico Rosberg.  He literally did everything right.  What more could you ask for?

*TEAM OF THE RACE:  We're going to break with the logical answers today and instead give the TotR award to Force India.  They finished 5th / 9th (from 17th!), the team's best result in Monaco ever, and Adrian Sutil pulled off some amazing passing moves.  Way to go, guys, you deserve it.

*MOVE OF THE RACE:  While McLaren is having a lousy season, it's hardly because of Jenson Button.  He's clearly doing the best he can with a car that just isn't any good, which isn't much... he's never been the sort of driver who can bring out the best of a bad car.  Still, late in the race he was in 8th, behind HWMNBN and Adrian F'n Sutil as they piled into Rascasse, not exactly a common place to try and improve your position.

As they wound their way past the nightclub, HWMNBN found himself outside of the Force India, while Button had the inside line. 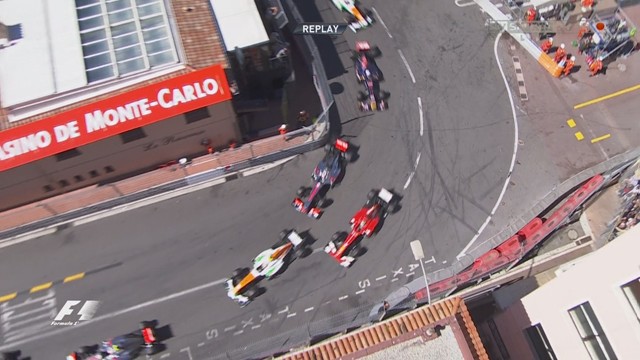 To be fair, nobody in their right mind tries to pass in Rascasse.  It just isn't done.  However, the presence of the Force India actually balked the Ferrari momentarily, lest the red car have its nose removed. 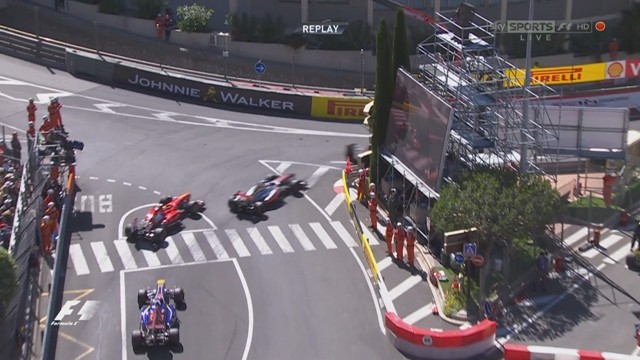 This opened the door for Button to haul his recalcitrant McLaren through the turn slightly faster than the two-time World Driver's Champion could manage, and pull off a pass that usually would end in nothing but tears and carbon-fiber shards.  On a day full of impressive passes, this was the best of the lot.  It's not much, Jenson, but here's your MotR!

*MOOOOOOOO-OOOOVE OF THE RACE:  On Lap 63, Lettuce Grosjean was following Daniel Ricciardo, who was racing for points.  Coming out of the tunnel, the Lotus driver didn't really bother to brake as they approached the chicane.

Ricciardo was out on the spot, Grosjean pitted for a new nose, turned a couple of laps, then was retired.  This was Grosjean's fourth accident of the race weekend.  Consider this Moooo a "weekend achievement award."  Way to be.


"No, I wasn't thinking about my father." - Nico Rosberg

"Usually you expect two Silver Arrows in front of you, but they were more like buses today going for a cruise on the first couple of laps." - Hannibal Vettel (note: real quote)

"I had a great start; sod's law that it's the shortest run to Turn 1 here." - Mark Webber (note: real quote)

"Vijay Mallya's got a biiiiiiig boat in the harbor, filled with Kingfisher and girls.  It's PARTY TIME!" - Adrian F'n Sutil

"I need to take my teammate out behind the motorhome and beat the everlovin' carbon fibre out of his head." - Jenson Button

Right, Montreal in two weeks!  See ya then!

When I saw the race results and noticed how high Force India had placed, I was really impressed. They're no longer the laughing stock of the series (I guess that would be Marussia now).

Why do they bother with the 107% rule if the stewards are going to automatically grant a waiver to anyone who exceeds 107%?