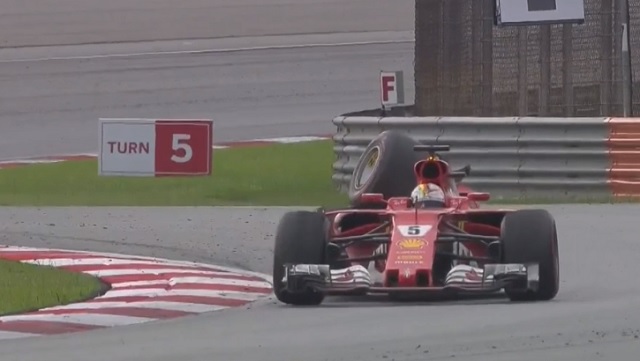 Vettel had been behind the Williams of Pleasant Stroll as they were on their cooldown laps, with the Ferrari moving somewhat faster.  When they approached the next turn, the Ferrari driver went past Stroll.  There was a coming together and the Ferrari ended up a shambles.  The Williams, on the other hand wasn't even scuffed.  Both drivers blamed the other.  It is the opinion of F1U! that Vettel probably should never have put himself in that position in the first place... he's got a championship to fight for, and while this happened after the race, suspension damage often causes collateral damage to the engine or gearbox.  Changing those would give a penalty for the next race.  Reports are that the gearbox is undamaged, but those reports weren't coming from Ferrari.  Very, very bizarre, and not the first time this season that Vettel has done something stupid.
So that's it for Malaysia.  Next race is next week, at F1U!'s official favorite circuit, Suzuka in Japan.  See ya then!

1 I thought Ric did a great job holding off Vet. He managed to use the backmarkers very well to slow Vet down.

Max did say he felt comfortable taking a risk because he figured Ham would play it safe, having a championship at stake. I haven't seen if Lewis has commented on it himself. I thoroughly enjoyed his facial expression at the end of the race, though.

And I figure Vettel riding on Wehrlein's car had to violate some health and safety reg somewhere...

2 Well, good on the birthday boy, even if Hamilton was taking it easy to a certain extent.