F1 Update!: Hungary 2009! We admit that we're writing this while the race is still running on FOX.  The ending doesn't seem to be in doubt, and it's been a pretty dull race for the most part.  THIS is your F1 Update! for the Hungarian Grand Prix!

*MISSING MAN FORMATION:  There was never any question but that Felipe Massa wasn't driving this race, but we were surprised to hear that Ferrari wouldn't field a second car. 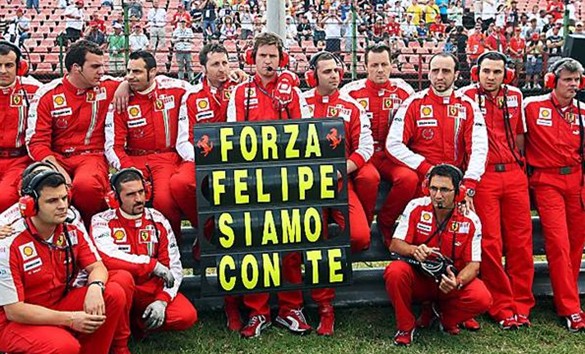 *ALL BETS ARE OFF:  It's now a free-for-all for the Driver's Championship.  With Seb Vettel retiring from the race and Mark Webber finishing third, suddenly Webbo is second in the points.  Throw in Button finishing a weak 7th and Rubens Barrichello's customary bad getaway at the start forcing him to scramble for 10th place, and we're starting to get a little tighter in the Constructor's Championship, too.  Suddenly, however, the 600lb gorilla known as McLaren have to be considered in the running for something with their runaway victory and 5th place finish.  About the only thing we feel safe to call is that Farce India won't win either championship.

*DRIVER OF THE RACE: "The car has come alive.  I can win with it now."  Those were the words of Lewis Hamilton back before the the German Grand Prix, and perhaps it was only because of his bump in the first turn of that race that he couldn't make them come true then.  But he has now.  Once he got past Mark Webber for second (see below), it was pretty clear that he was going to be running the show.  Once HWMNBN removed himself from the lead for a pitstop on lap 11, it was clear sailing for Hamilton, who turned in one of his usual flawless runs from the front.

*TEAM OF THE RACE:  McLaren.  1st and 5th for a team that looked like it was more likely to be dicing with the Farce Indias for 20th at the start of the season?  They're back, and they're ready to take over.

*MOVE OF THE RACE:  On lap 5, Hamilton was dueling with Mark Webber coming down the front straight, neither driver giving an inch as they rocketed towards turn 1.  Webber had the middle of the track staked out, and Hamilton swung to the outside, looking like he was going to try to outbrake the Red Bull.  Instead, he slowed early, cut to the inside of the Aussie, then jammed his finger down on the KERS button and flew away.  Totally effortless, and there wasn't a darn thing Webber could do about it, save for wrecking both cars.
*MOOOOOO-OOOVE OF THE RACE:  In a repeat of the 2006 Hungarian Grand Prix, HWMNBN came into the pits for fuel and a tire change.  Unfortunately, the chief engineer gave the two-time champion the okay to go before everything was finished being tightened down.  The result? 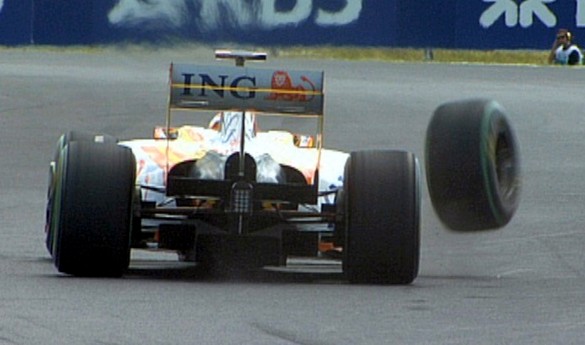 For the record, a F1 car loses a lot of grip when there are tires on only three corners.  Congratulations, Renault, not only do you get the MOOOotR, but you've also been suspended for the European Grand Prix for "allowing HWMNBN to leave the pits with a wheel not properly secured."  Good jorb!
*DRIVER QUOTES OF THE RACE:

"Me and Nicole, we're gonna have some fun tonight!  Drinkin', dancin', rollin' between the sheets, all that sort of great stuff you get when you win!  Oh, and get well soon, Felipe." - Lewis Hamilton

"Did you know that I'm now fifth in the Driver's Championship?" - Nico Rosberg

"I should have gotten the MotR for my pass on Webber.  But no, no love for the Glockmeister." - Timo Glock

"Did you know that today's win by McLaren is the first for any team other than Brawn or Red Bull this season?  In other words, I'm not worried." - Jensen Button

"I have nothing to say that is either relevant or true." - Jarno Trulli

"There was some good action out there but none of it had to do with me.  It's the team's fault.  And, hey, I didn't send anybody to the hospital today, so that's good, right?" - Rubens Barrichello

"I was always stuck behind somebody, which didn’t help my race. I was also a bit unlucky with the strategy and I think my race would have worked out a lot better if I had been in some clean air.  And if you change 'race' to 'career', the same would be true." - Nelson Piquet Unemployed (note: mostly real quote)

"I had a good start and a good first lap.  At least this is something positive." - Robert Kubica (note: real quote)

"You have now entered... the Farce India zone." - Giancarlo Fisichella

"I am very happy to have finished, but the last five laps were very difficult from the physical point of view.I have learned a lot but I have to say there are some aspects of F1 which made me think, 'Shit, this is tough.'" - NKOTT (note: real quote, and yes, he said it exactly like that)

"How could I have finished behind that kid?" - Sebastien Buemi (who is 20 years old)

"We have a button on our steering wheel, which is similar to the other teams, but nothing happens if you press it." - Sebastian Vettel (note: real quote.  No, I'm not entirely sure what he's talking about either.  KERS, probably, but in context, this sentence doesn't make sense.)

"I lasted one full lap before my engine overheated." - Adrian Sutil

And now we have to go a full month before the next race.  We'll see you in Valencia!

HWMNBN must have been livid. After pulling out his first pole of the year, to flush it away like that because of a mistake by the pit crew just have been disappointing as all hell.

2 Great run by Button yesterday, who deserved the win solely for his exchange with HWMNBN live on BBC on Saturday after the timing went down.
Button: I did 1:22.5, what about you?
HWMNBN: 1:21.7
Button: F***ing Hell!

Also after that terrible accident to Massa, I believe that Ferrari couldn't run a replacement, saw discussion of this elsewhere, and it seems to be that the rules state you can't replace a driver after qualifying for the race starts.

Finally, rumour elsewhere is that a possible replacement for Massa for the next race could be...HWMNBN. Crazy rumour, but I wonder...

I was wondering if the replacement driver for Massa might be Schumacher, since The Chin has stepped back in from retirement.  Also, it might make Massa feel better if his temporary replacement did not have designs on the driver's seat.