F1 Update!: China 2009! We shouldn't be surprised that it was raining in Shanghai today.  After all, this is Bizarro Season, and the forecast was for sunny skies: of course it was raining!  THIS is your F1 Update! for the 2009 Grand Prix of China!
*CLICHE TIME:  "Rain is the great equalizer."  Cliches get to be cliches because they're usually true.  In F1, this particular cliche really is true.  Throw in the new aero rules and nobody knows just what's going to happen when it rains... and that goes double for the newly-dominant BrawnGP team.  After all, they only had a month's worth of testing before Australia, and none of it was in the wet. Oh, don't get us wrong, a good car is still going to be better than Farce India's entries, but the gap between the two is going to be very much reduced, and a driver's skill level becomes the main factor in where the two will end up in the final standings (which explains why FA's Adrian Sutil was running in sixth place until very late in the race: he's good in the wet).

So when the skies opened up above the Shanghai International Circuit sometime before the tv cameras were turned on, two things became very clear: 1) it was going to be an interesting race, and 2) polesitter Sebastian Vettel was the happiest man in the world.  Last year, he had a dominant win from pole at Monza in the wet, laying claim to the title of "Der Regenmeister" in the process.

Today, Vettel repeated his Monza performance with a twist: he was even more dominant.  At one point, he was over five seconds a lap faster than Jenson Button.  He finished nearly 45 seconds ahead of the Brawn driver, and it would have been a lot more if his team hadn't have reined him in.

*GIVES YOU WIINS:  Today's win by Vettel was the very first for Red Bull, a team now in its fifth season.  Last year, he also earned Toro Rosso, Red Bull's unofficial junior team, their first win at Monza, also in the wet.  Vettel is no longer a future star... he's a star now.

*DRIVER OF THE RACE:  Should be obvious by now, shouldn't it?  Sebastian Vettel not only blew the rest of the field off the track today, he made it look ridiculously easy in the process.  At one point, he came out of the pits, with a full tank of fuel and green tires, some seconds behind the previously unassailable Jenson Button, who was low on fuel and therefore should have been faster.  He caught up to the Brawn racer in no time flat, then blew his doors off.  After that, he wasn't ever challenged.  Probably the most dominant performance we're likely to see this season... unless it rains again.

*TEAM OF THE RACE:  Again, should be obvious by now.  Red Bull not only got their maiden victory today, but Mark Webber, their other driver, finished second, 30 seconds ahead of his nearest competition.  When everything is going right, you get results like this.  Now to see them do it in the dry....  Honorable mention goes to McLaren for their fifth-sixth finish.. with Lewis Hamilton, their best runner in the rain, following Heikki Kovaleininninnie, who had yet to finish a lap this season.  Baby steps, baby steps.

*MOVE OF THE RACE: On lap 31, Mark Webber goofed on the final turn (like many, many drivers did today), letting Jenson Button go by for 2nd place in the process.  Seven turns later, on a slippery track, Webbo went around the outside of the Brawn and made it stick hard.  The way the day had gone, the Red Bull driver probably could have passed Button later if he had waited, but it was still a gutsy move, earning a well-deserved MotR.

Honorable mention goes to the Toyota crewmember that came up with the idea of the "nose trolly," a device to make a nose cone change go quicker: 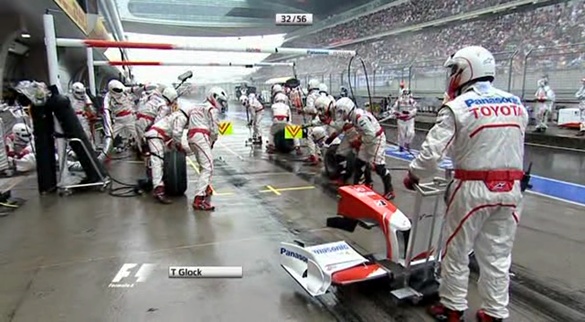 Previously, a nose change required two people to position the new nose, then a third to fasten the quickclips, and usually took about 15 seconds or so to perform.  Toyota's new cart, though, took the place of two people, and took about 10 seconds off the process.  Brilliant!

*MOOO-OOVE OF THE RACE:   When the best drivers in the world get stupid, they sometimes look like cows on the field... and thus, the Moooo-oove was born.  Toyota's Jarno Trulli was not having a good day.  From the moment the safety car left the grid and racing really began, he had been slipping farther and farther down the grid, looking like he'd never driven in the rain before.  Maybe the car just isn't good in the wet, maybe he's not good in the wet, whatever.  BMW's Robert Kubica wasn't having much better of a day, but he was, at least, competitive.  It was on lap 18 that the two of them conspired to turn both of their days miserable.  Trulli slowed down precipitously into the final turn, and Kubica, storming down the short straightaway either didn't see him due to the rain and spray, or couldn't get whoa'd up in time.  The result? 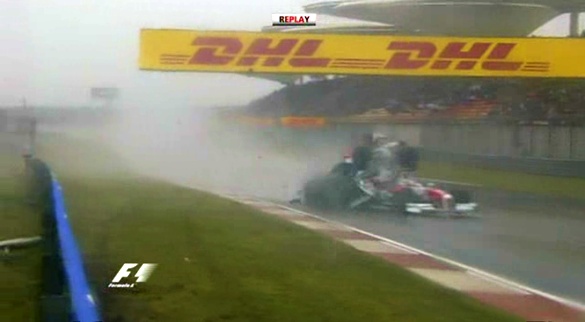 Surprisingly, Kubica only needed a new nose (as opposed to the new suspension it looked like he should have needed), and was able to go right into the pits to get it.  Trulli, though, was knocked away from the pit entry and had to do a lap like this: 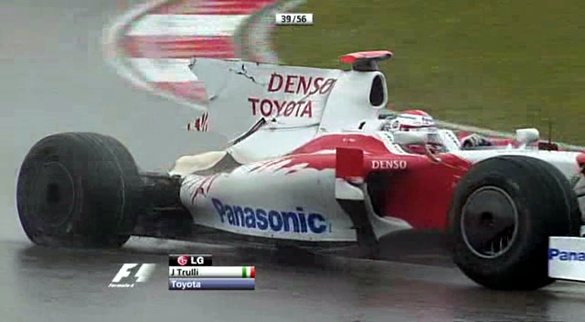 Looks almost naked, doesn't it?  We just wish we could figure out which one of these two worthies to give the award to... so we'll give it to both of 'em.  Nice job, boys.

"I celebrate honestly on the podium, I drive well in the rain, and I'm German.  Sound familiar?" - Sebastian Vettel.

"Second.  Not bad for someone who ran his bicycle into a truck a few months ago, eh?" - Mark Webber.

"Why is it I'm disappointed with third place?" - Jenson Button.

"Only took me three races to officially finish a racing lap.  I love this job." - Heikki Kovaleinninninnie.

"We've now got eight points, but Ferrari still only has one.  Ha-ha." - Lewis Hamilton.

"If I'm going to get points every time I do it, I'll start from the pit lane every race!" - Timo Glockenspiel.

"Dude, like, it was totally awesomely cool out there." - Sebastien Buemi (note: he's 20 years old)

"I've won two world championships, and I finished behind some iPod-wearing brat in a Toro Rosso?  Cr@p." - HWMNBN

"I don't think we should have raced as there was so much aquaplaning.  The one positive thing is that it was probably a good show for the fans." - SeaBass (note: real quote)

"I have nothing interesting to say.  As usual.  I'm a German BMW driver." - Grizzly Nick Heidfeld.

"It was a difficult race.  Of course, I drive for Force India, so every race is difficult." - Giancarlo Fisichella.

"Remember when people were saying that Williams was going to have a great season?  Whatever happened to those days?" - Nico Rosberg

"I used three different noses in the race today.  Isn't that like a record or something?" - Nelson Piquet Jr

"Water in the electrical system... who knew that'd be bad?  Ferrari's screwed this year, aren't we?" - Felipe Massa.

And thus, the Chinese Grand Prix comes to a close, but we'll see you next week in Bahrain!

1 I think we can be pretty sure it won't be raining in Bahrain.

2 You wouldn't think so, but Astro assures us differently.  Who knew?

Yeah, sure, it has been known to rain there. There's no where on the planet where it never rains. (Or snow.)

But it doesn't rain much there, or often.

4 Hey, I'm not disagreeing with you, Steven... I'M not expecting rain either.

6 Lewis Hamilton should check his math, Ferrari currently has 0 points

I could not be happier.

7 Rain's not a problem. Snow, now that's a problem.

How in hell do you spin out when driving straight on a straight track segment? Sheesh.

I'm guessing that he broke away the driving tire on one side before he did the other side, so temporarily one had more traction and that's what made the car spin.

I looked it up, and apparently the driver was unhurt. That's a relief.

10 Yeah.  He'd never driven a F1 car before (he is a champion rallycar driver, though), and he just goosed it a little too hard, or moved the steering wheel a little too energetically.