The Rain In Bahrain Falls Mainly... ...in dreams.  This off-season, a lot of F1 testing is being done at the circuit at Bahrain, thanks to the prompting of Toyota's Tech Chief, Pascal Vasselon.  "The weather in Bahrain is perfect for testing.  Never any rain, unlike Jerez, which always has rain."

So Toyota, Ferrari and BMW packed up and went to Bahrain, laughing at the poor suckers who were going to be rained on in Spain.  Ha-ha-ha-ha-haaaaaaa!  See, that's what they sounded like as they laughed.

But they forgot something.  It doesn't rain in Bahrain, true, but it does get a little windy.  And that, my friends, leads to... 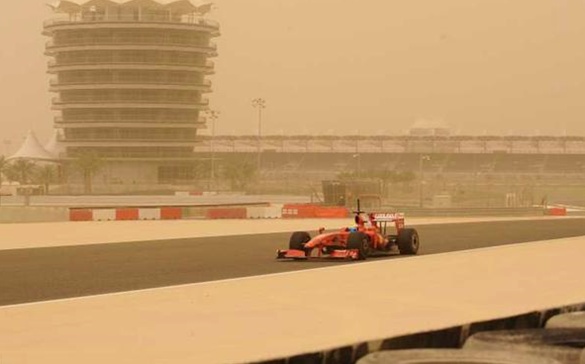 Oh.
Yes, that's right: SANDSTORMS!  For the past two days, Bahrain has been dealing with sandstorms, limiting each team to about 18 laps per car as the track has been closed.

Imagine having that sucked into a 19000 rpm engine...
Oh, and Jerez?  The teams there are averaging about 110 laps/car.  Whoops.

When I first saw those pictures, I thought "Los Angeles Smog". But yeah, I can believe it's a sandstorm.

I bet those cars don't have air filters, do they? Sucking sand down that great big air scoop is going to do wonders for the engines.

There's a screen to prevent big things from getting into the engine, like dogs and insane Irish priests, but that's about it.

What in hell was that idiot priest trying to accomplish?

(And I really feel sorry for Bruno, that driver who hit the dog. Out of the race by stupid bad luck. Hardly any wonder he was pissed off. Actually, he took it pretty well. I expected him to cuss a blue streak. But maybe he got all that out of his system while he was driving to the pit lane.)

A screen isn't going to stop sand, and they can't afford to interfere with their air flow with anything that could stop sand.

4 Oh, it does rain in Bahrain.  You'd think that would wet the dust, but you can get an amazing combination of zero viz duststorm topped by 35,000 feet of thunderstorms.  That's a nightmare I'm glad I'll never have to see again.

The next year, at the Athens Olympics, he tackled the runner leading the men's marathon, holding a sign reading "The Grand Prix priest. Israel fulfillment of prophecy says the Bible, the second coming is near."

So he's an End-Of-The-Worlder.  And a full-fledged loon: in 2006 he planned to stage a protest in Berlin, at the World Cup final game, with a sign saying that "Adolph Hitler was a good leader who followed the word of Christ."  He would then give a Nazi salute, and light a candle Gestapo HQ.

So not just a loon and an Apocalypso, but a Jew-hater to boot.