*WHEN IT RAINS, IT POURS:  The last time there was a wet race at Monza was 1985.  By coincidence, that was also the first year in F1 for a little independent team from Italy named Minardi.  There have only been four rainy races in the 59 year history of the Italian Grand Prix.  Make it five, as it was so wet today that the race started behind the safety car.  It appeared that Toro Rosso's gamble on a wet-weather setup had paid off, but would Sebastian Vettel be able to hold off the McLaren of Heikki Koveleaninninnie, starting right behind him?  Very quickly it became obvious that the answer had a seriously good chance of being "Yes", as Vettel ran away from the rest of the field when the safety car went in on lap two.  By the end of the first flying lap, the Toro Rosso driver had a two second lead on Koveleinaninninnie, and it was growing every lap.  Then the question became "how much fuel does Vettel have?"  He must be light, how else could he fly away so quickly?  Well, yes, he did have less fuel, but only by a couple of laps... after his pitstop on lap 18, he fell back to fourth, but everybody else still had to stop.  After the leaders had all stopped... Vettel was leading again, by a good 15 seconds.  Lewis Hamilton, who started 15th, was on a one-stop strategy and had closed up on the Toro Rosso, getting as close as one second behind, but he had to stop and disappeared.  Vettel was never challenged again, and cruised to a 12 second win for his first victory, his team's first victory, and becoming the youngest winner in F1 history. 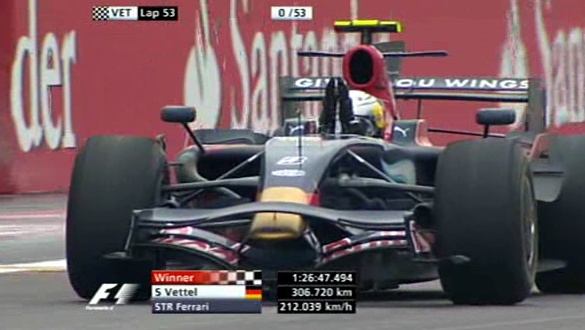 In 2005, Minardi was sold to Dieter Maeterschitz, founder of the Red Bull empire, to become Toro Rosso.

*YOUTH IS WASTED ON THE YOUNG:  Not only did Vettel win the race to become the youngest winner in F1 history, but with Heikki Koveleaininninnie finishing second and Robert Kubica third, this was the youngest podium in F1 history.  When Michael Schumacher retired after the 2006 season, people said that F1 was doomed.  Then some kid named Lewis Hamilton appeared, and now Vettel, Kubica and Heikki have all won their first races this season.  Michael who?

*DRIVER OF THE RACE:  Duh.  Sebastian Vettel made a grand total of zero mistakes on a slick, slippery track and never had to worry about a serious challenge as a result.  Yes, he had the advantage of driving at the front of the thundering herd, meaning he was the only person to actually be able to see all day, but at any second he could have skidded into a graveltrap or a wall.  He didn't, and completely earned this victory.

*TEAM OF THE RACE:  Double Duh.  Minardi Toro Rosso had the perfect strategy for the race, executed it perfectly, and timed their pitstops to perfection.  Those two stops went flawlessly, and as a result, they were rewarded with a dominant victory.  Toro Rosso has about 1/10th the number of employees of McLaren, and are considered the "junior team" of the two Red Bulls.  Yet Minardi Toro Rosso has entirely crushed their more senior teammates.  Embarrassing for Red Bull, great for F1.  Bravissimo, signores!  Now do it again and we'll start talking about a fourth "big team".  Darn shame SeaBass stalled his car on the grid, otherwise we might be talking about a double podium for y'all.

*MOVE OF THE RACE:  On lap 36, Lewis Hamilton had to go back into the pits to switch from full-wet tires to intermediates.  He was still getting the speed from the heavy weather rubber, but they were quickly going away on him; it wasn't wet enough for them.  Into the pits he went, and on cold tires he was forced to watch Mark Webber steam past him in the first chicane.  Immediately thereafter, the McLaren went ripping off after the Red Bull, and with a grand total of one turn's worth of experience on the Intermediates (which couldn't've been heated to race levels yet), Hamilton outbraked Webber into the second chicane.  Nothing more than a driver at the top of his profession showing what could be done, and how to do it.

*MOOOOOO-OOVE OF THE RACE:  What happens when you take the best drivers in the world... and you remove their brain for a second or two?  You get the Mooooo-oove of the Race.  Today's Mooo-oove goes to Giancarlo Fisichella (again).  On lap 13, he somehow managed to run his Farce India into the back of David Coulthard's Chin's Red Bull in the first chicane (top speed: 45mph) with enough speed to damage his front wing.  The wing, wobbling as he went, stayed on the car just long enough to fall off in Parabolica, sending Fisi straight off into the wall... where his entire car got borked, thereby becoming the first and only car to retire from the Italian Grand Prix.  At his home race, too!  Bravo, Giancarlo, Qui è il vostro premio della mucca!

"I can't believe it!  Thank you guys, thank you, you all did a great job, thank you, thank you, YEESSSSSSSSSSS!!!!  Whoo!" - Sebastian Vettel, to his pitcrew.

"I should have won.  I pissed it down the leg of my firesuit.  Maybe Renault knew what they were doing when they let me go to McLaren." - Heikki Kovaelieniiniininnie

"Sometime skill doesn't matter.  Today, I got lucky with the second pitstop, because it was exactly the right time to change to inters.  If it gets me podiums, I don't care how I got it." - Robert Kubica

"Kubica passed me on the first flying lap, allegedly.  I never saw him, and he couldn't've seen me." - Grizzly Nick Heidfeld (note: he's not kidding... visibility was maybe six inches when the safety car pulled off, at least for those in the Thundering Herd)

"In normal conditions, in other words in the dry, I think I could have made it to the podium.  I also think that the stewards at Spa made exactly the right decision, how dare that Hamilton beat a Ferrari?  This is Italy, we should be able to get the drivers in front of me penalized, right?" - Felipe Massa

"If it had kept on raining, I feel pretty confident I probably could have even won from 15th grid position.  I also feel confident that I want some of what Massa is smoking, it must be really good." - Lewis Hamilton

"My teammate finished fourth to my 10th.  I have this strange feeling I should be looking for alternate forms of employment pretty soon." - Nelson Piquet Jr

"I have nothing to say that is either relevant or true, as nothing of interest occurred during my race." - Timo Glock

"It doesn't matter how I did behind the wheel today.  This humidity has just ruined my hair." - Jarno Trulli

"So my tires wore out faster than everybody on the track?  Maybe I should learn how to drive... then I'd get a point or two when I should, like today." - Nico Rosberg

"I would just like to second everything Jenson said, and add that a Yugo with a tailfin would probably be faster than this thing." - Rubens Barrichello

"How, exactly, does a car equipped with anti-stalling devices stall?  On the grid when I'm starting 4th, ferchristsakes?  Merde on a stick, man..." - SeaBass

"For sure it was not the best race for us." - Adrian Sutil (master of understatement)

So that's it for Bizarro Race.  In two weeks we get to what might be the most eagerly anticipated race of the season: Singapore.  The first night race in F1 history, and a REAL street circuit to boot.  We'll be here, you be too!

1 Vettel won this race fair and square -- in the quals yesterday.

2 Well, I don't know that I'd go quite that far, but it sure didn't hurt that he didn't have to deal with the spray.  He still had to keep the car on the track, and by all rights Kovaleinninnie should have been able to give him a race, and... and...

Vettel did an awesome job today.  Plus the anthems on the podium were a trip down memory lane.  (Can't help it, I'm still a Schumey fan.)

4 Just to make things clear (i hate doing that

Kubica had only ONE pit stop and that was on lap 34 from 53. And along with perfect timing for  inters that was the key to finish 3rd starting 11

Well, it's always really nice when someone other than Ferrari or McLaren wins it. It's particularly nice when it's a no-hoper like Toro Rosso, showing everyone that there's always hope.

Now it's time for Force-India to win one.

6 If either Farce India or Honda wins a race this year, I'll have to designate this as Bizarro Season.

It's interesting that this is the first time ever that a Ferrari-engine customer team has won a race.

7 Actually, Vettel said in the FIA Post-race Quote that the team gambled on running a dry setup. Apparently everyone else was running a wet setup, as they should. But a wet setup carries generally more wing, which is disadvantageous in Monza.

8 I think if we'd gone a whole year without highly-disputed penalties for drivers, then it would be bizarro season.

Fantastic race, so happy for Toro Rosso, so good seeing how much the whole team enjoyed that.

9 I was so glad to see Vettel pull this off! When can anyone remember having such a wave of new talent as we have in F1 today?

10 Jeez, if Vettel was running a dry setup in that weather, the win is even bigger news!