F1 Quals: Brazil 2009 So it rained a little bit at Interlagos today during Quals. 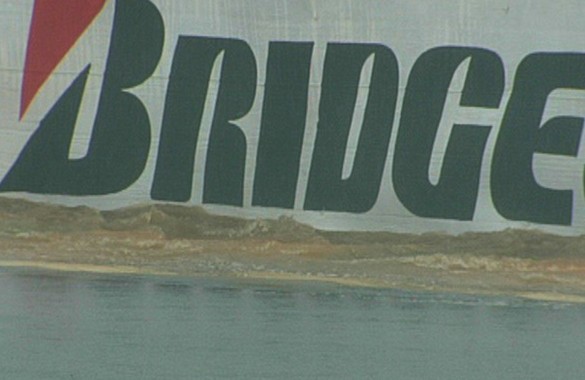 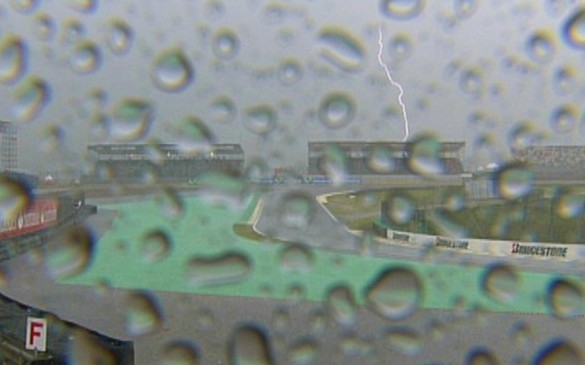 It took nearly three hours to get all three qualy sessions in because of the rain.  The medical car, subbing for the safety car today, turned many, many more laps checking the track than any racer actually put on the cars.  Unfortunately, I only set the VCR to run for two hours.  As a result, I have yet to actually see Q2 or Q3... after Vitantonio Liuzzi ripped the back of his Force India off after hydroplaning and spinning on the front straight at the very start of Q2, a red flag stopped the session until the weather improved. 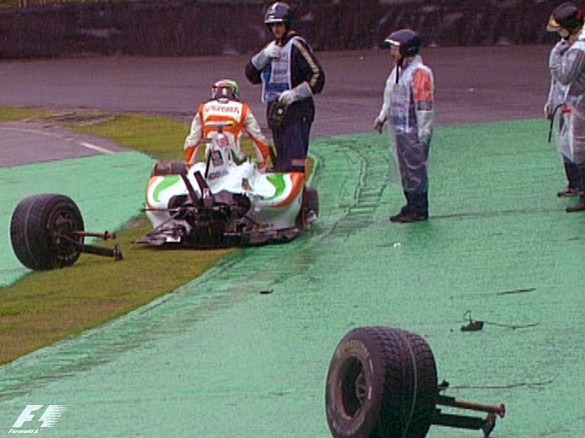 You don't usually see the axle severed from the car like that...
90 minutes later, the tape ran out before they restarted.  But restart they did, despite Mark Webber, the president of the Grand Prix Driver's Association, saying "I don't think it was the right thing to probably start in those conditions, every driver I spoke to was of the same opinion, fortunately the right decision was made in the end, but TV drives things and we have to start."

Vettel, Heikki and Lewis are all reported to have a dry weather setup, gambling on there being no rain tomorrow.  Unfortunately for Vettel, he's GOT to win to have any real chance for the driver's championship, and starting sixteenth ain't gonna make that easy for him.

To be honest, they never should have run this Quals today.  There is plenty of precedent to have quals on Sunday before the race, and if there has ever been a weather-related reason to delay them, this was it.

Still, you race with what you got, and this is what they got.

1 Do you have Vettel and Barrichello mixed up? Vettel has a 14 point lead going into this race.

2 Nope.  Jenson Button has 85 points; Barrichello is 14 points adrift of him, and Vettel is two points behind Rubens.

If Vettel is to have any realistic chance of winning the Driver's Championship, he needs to win both here and in Abu Dhabi, and Button must DNF or score no points in at least one of the races.  The same situation applies to Rubens.

Really, it all comes down to what Button does.  If he DNFs, then we've got a race in Abu Dhabi.  If he finishes third or better in Brazil, it doesn't matter what the other guys do, he wins the championship.

If there's a tie in points at the end, Button wins the championship on the first tiebreaker: race wins for the season.  Button has six, the most Vettel can get is five (if he wins both Brazil and Abu Dhabi), and Rubens can max out at four.  And please note, if we had that stupid "Medals" plan that Bernie Ecclestone tried to force down out throats at the beginning of the season, Button would have won the Driver's Championship at Singapore.

3 You're right. I had Vettel and Button confused. (I'm an idiot.)