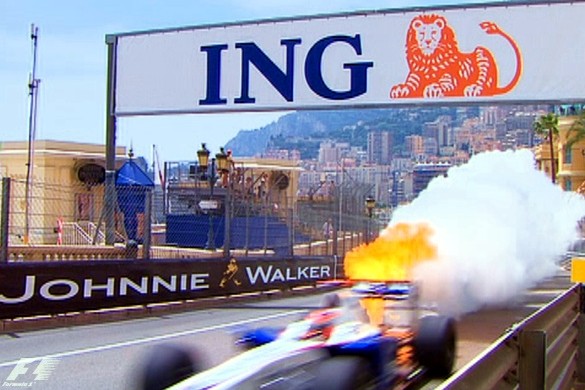 Robert Kubica goes "Kablammo!"
Things just go from "bad" to "goatse.cx" for BMW.  Not only have they been miserable all season, but brake problems pretty much kept them out of 1st Practice... and you can see what happened to Koobs at the beginning of his first flying lap in 2nd Practice.

Which is a bleedin' shame, because my prediction of the slow cars having a shot this year seems to be coming true.  Lewis Hamilton's McLaren was 3rd fastest in P1 and 2nd in P2.  Felipe Massa wasn't far behind in his Ferrari, being 2nd in P1 and 5th in P2.

As usual, you probably shouldn't draw any inferences from practice times, but a lot of drivers were pushing hard today.  They need to; there just isn't enough time on track to loaf around in Monaco.

Not that that stops Vijay Mallyia, team owner of Force India.  He's throwing a party every night on his yacht... his 300 foot long yacht.  Oh, did I mention that there's a $30000 berthing fee for the race?  For every boat in the harbor?  No matter the size?  My god... money may not solve everything, but I'd love to give it the good ol' college try.

One last bit of racing news that didn't surprise me.  Instead of the usual "two-spot difference in tire compound", for Monaco they're only having a one-spot difference.  Bridgestone has brought the super-soft and soft compounds to the track.  This is good... there's no grip to begin with, what with the public roads making up the circuit, and throw in the small rear wing and it's miserable out there.  Every car at nearly every turn was fishtailing, and at one point it looked like Nelson Piquet Jr was actually drifting through Mirabeau.  While it WOULD have been exciting to see the medium tire compound on the cars, it also would have been an excitement that didn't last long.  Perhaps all the way to Massanet, perhaps not, but it would have been exciting.

Qualifying on Saturday... see you then!

That is a most impressive fireball. I hope he's all right.

Presumably that was the end for him for today, but also presumably they'll have it repaired by Saturday.

Yeah, he's fine, and yes, that was pretty much the end of his day.  They shouldn't have any problems dropping a new lump into the back... maybe an hour or so of work, two hours tops, once they get the car in the pit lane.  Back in the old days (four years ago), it wasn't impossible to see a car blow an engine at the start of practice, and have it back on track before the end of the session.

3 Under a $60 million budget limit, this might have been the end of his season.

4 Well, at least for 2010, engine costs aren't covered under the cap, but your point is taken.

That was a beautiful 90-minute visit to Monaco.  Hope the qualifying weather is just as nice.

That was, indeed, the very defiinition of an engine that "dun blowed up."