Also the shortest track, the slowest track, the tightest circuit, the one with the most elevation changes and the fewest straightaways.  In fact, you're hard-pressed to find anything straight anywhere on the circuit.  But, oh, it is glorious if you win! 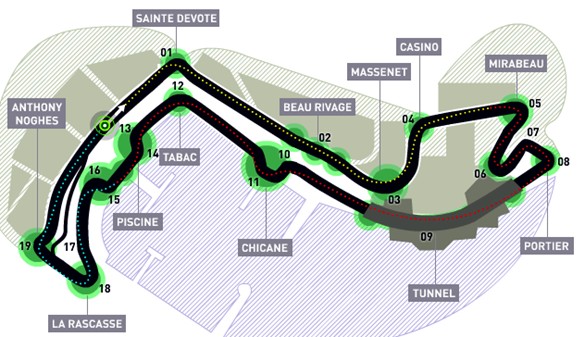 You start in the front "straight", from Anthony Noghes to Sainte Devote, and begin going uphill more or less the entire way to Casino.  From there, it's downhill all the way to Portier.  Along the way you have to crawl through Loews (turn 6), the tightest turn in F1 (if not the world of auto racing), at 30mph.

After Portier, you hit the highest speeds in the run through the Tunnel (oh, and you're nearly blind in the process) to the Chicane, the whole way along the harbor packed with pleasure boats worth more than some F1 teams.  You scream through Tabac (well, inasmuch as any car "screams" on the Monaco circuit), run past the Swimming Pool (aka Piscine), slam on the brakes in time to hit La Rascasse, avoid the parked Ferrari of Michael Schumacher at Noghes, and then you do it all again... 78 times.

Meanwhile, the fans are behind Armco barriers mere inches away from the action while sunbathers lie on the rooftops of the five-star hotels that dot the circuit.  If it wasn't for history, there's no way Monaco would be on the calendar.  There's no runoff area except for short escape areas near Sainte Devote and turn 13.  Everything else?  Armco everywhere.  A slight mistake means your race is over, your suspension shattered, your front wing skittering down the road without the rest of your car.

Famously described as "trying to bicycle around your bathroom" or "flying a helicopter in your living room," Monaco is one of the three wins in racing's unofficial Triple Crown (Monaco, the Indianapolis 500, and the 24 Hours of LeMans).  Now-NASCAR driver Juan Pablo Montoya is the only current driver who has won two of them, and only Graham Hill has succeeded in accomplishing the task.

Last year's race was a wild one that saw Force India's Adrian Sutil with a shot at the podium late, until Kimi Raikkonen ran into him from behind on a wet track, and McLaren's Lewis Hamilton taking the win.  This year, who knows?  With all the technical changes, cars that are slower on other circuits may very well be favorites here!  That's the beauty of Monaco, and the good folks at SPEED will be bringing it all to us (more-or-less) LIVE!

It all kicks off on Thursday, May 21st, from 7am to 840am, with the 2nd Practice session.  Again, that's Thursday, not Friday as is usual; yet another of Monaco's quirks.  Friday is an off-day, but then everything kicks off again on Saturday, May 23rd with Quals from 7am to 830am, plausibly live.  At this track, if you ain't up front at the beginning of the race, it'll take a miracle (or a crash) for you to have a chance, so you'll see drivers pushing harder than normal... and crossing their fingers.

Finally, Sunday, May 24th, from 630am to 9am, brings us live coverage of the Grand Prix of Monaco, with a replay from 430p to 7p.  A wonderful start to the racing fan's unofficial holiday (Monaco in the morning, the Indianapolis 500 during the day, then NASCAR's Coca-Cola 600 at night)!

Great job on the Monaco preview!  This year I'm even going to be able to watch the Thursday practice.

Sunday is going to be a race fan's dream come true, with F1, Indy and the Coca Cola 600!