F1 Practice: Hungary 2009! Much to my surprise, the Legendary Announce Team was on a "Hungary is a really good track" kick today during P2.  "Because of the terrain (the Hungaroring is built in the valley of three hills) It's a great place to watch the race." "The race always gives us some special memory."  "It's a driver's track."

But yet, after the first lap there's usually no action to speak of, the drivers hate it, and it's more of a destruction test than a race at times.  No, I'm going to go out on a limb here and disagree with the L.A.T.: it's a horrible track.

On track, there wasn't much to report.  Oh, the Ferraris were having serious problems with grip again, and Felipe Massa in particular looked like he was driving on an ice rink, but they've had those problems before, too.  McLaren were on top of the timesheets all day.  Heikki Kovaleininninninnie was fastest until the final second or so, when Lewis Hamilton turned in the quick lap of the session.  The very interesting result, though, was that the entire field back to 17th place was separated by just one second.  That's pretty tight, and makes Quals look particularly exciting.

In other news, the New Kid On The Track (NKOTT), Toro Rosso's Jaime Alguersuari has been at the center of a firestorm of controversy.  It turns out that, before today, he had turned a grand total of ZERO laps ever in a Formula 1 car.  He's done some straight-line runs (which are all that are allowable under the regulations), but not even many of those.  He earned his FIA SuperLicense, without which one cannot drive in F1, by winning last year's British Formula 3 championship.

There are many ways to earn a SuperLicense.  Winning or being in the top three of some FIA-sponsored series (Formula 3, GP2, F3000, etc), or finishing in the top six of the Indy Racing League or CART can earn you one.  Driving 300km in a F1 car at race speeds within 2 days can, with approval of the FIA, earn you one (this is how Fast Yuji Ide earned his provisional SuperLicense).  You can also be granted one by unanimous vote by the FIA license board, but that's not very common... if Slappy Schumacher was hired to drive a F1 car again, that's how he'd qualify, I'm sure.

Many drivers have mentioned that NKOTT is going to be something of a risk out there.  Nobody doubts he has the skillset to be a F1 driver, just that he doesn't have the experience.  I tend to be more of the "If you're good enough, you're experienced enough" school of thought (see Vettel, Sebastian, US Grand Prix, 2007), but the drivers certainly have the right to voice their concerns.  And, for the record, NKOTT was dead last on the timesheets today, 1.8 seconds behind.

Finally, BMW had something weird on their car during Practice 1 today.  Take a look: 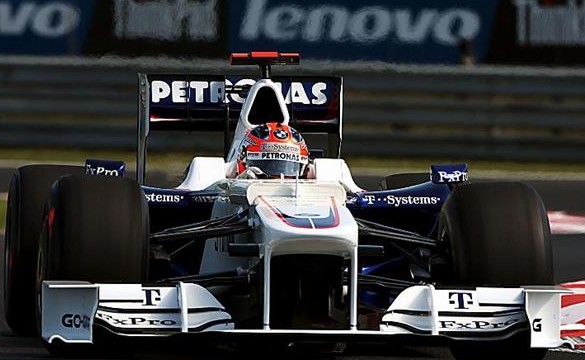 Look directly in front of the driver.
At first, the LAT speculated that the team neglected to remove the platform that the team places a video monitor on when the car is in the garage.  The monitor allows the driver to see telemetry, replays, or even the FIA video feed, but usually the base is designed to sit on the bodywork directly, no 'table' needed.

Eventually, the LAT's tech wonk, Steve Matchett, suggested that perhaps it's something related to testing for the 2010 car.  Since there's no testing allowed outside of race weekend, he said, maybe the 'table' is to simulate the design of the bodywork for next year's chassis, so as to check sightlines and visibility over the nose.  "After all, it'd be a bad thing if you put the driver in the car and he says 'it feels great, but I can't see anything'!"

Certainly there's no way the aerodynamic techies would let something like that hit the track, what with that flat front screwing up airflow!  It wasn't there in P2, so it seems like Matchett has the right of it, or at least is in the neighborhood.

Quals tomorrow morning.  Unfortunately, I'm working at the Duck U. Bookstore in the morning, then having lunch with Momzerduck and Ph.Duck afterwards, so don't look for the report to be up until the evening.  See ya then!

UPDATE: Almost forgot the most important news!  David Coulthard's Chin has been rehired by Red Bull as the team's third driver, replacing NKOTT.  This means that if Mark Webbo or Seb Vettel get sick, or injured, or are otherwise unable to race, The Chin will be back!

Hmmm...seems to me that an F1 race is not a really good place for on-the-job training.

Whoohoo -- good to have Coulthard back.