F1 Practice: China 2010! There wasn't much news to report for the afternoon session, which is the one televised by SPEED, but hoo-doggie was there action in the morning!

It all started when Ferrari's HWMNBN blew an engine, which means he's now on his third of the year.  With the eight-engine limit from last year still in effect, he could be in serious trouble down the road.

Then we discovered that, seven years ago, the Shanghai International Circuit was built on drained swampland... and not all of that was actually drained!  Fast forward to today, and the waterlogged bedrock underneath the track is beginning to subside, creating some rather nasty bumps.  How nasty?  Bad enough that Timo Glockenspiel actually broke his Virgin's front wing going over one.  THAT might be a problem.

It's also cold in Shanghai.  How cold?  Temperatures were in the 40s during the morning session; according to the Legendary Announce Team, to find the last time it was that cold on this date in Shanghai, you have to go back to the 1800s.  That'll make the tires work weirdly, if at all... Adrian Sutil said it might take six laps or more to bring them up to race temps.  That's not good at all!

But all of that pales in comparison to the sort of day that Toro Rosso's Sebastian Buemi had.  Imagine what it's like to be on the highway and you get a flat tire.  Well, Buemi was going around 180mph or so down the back straight when... well, this happened: 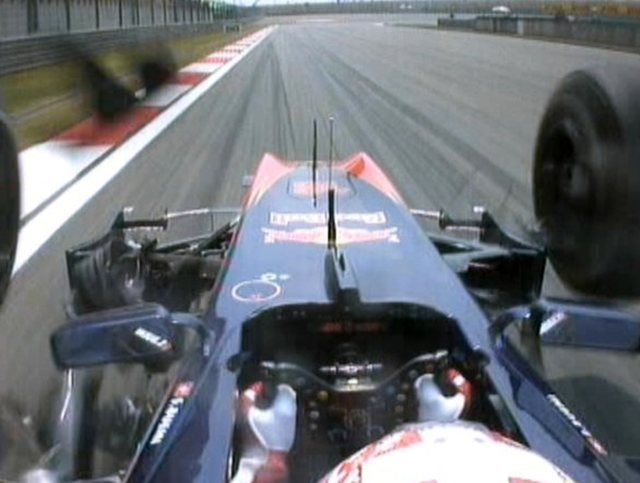 No, your eyes aren't deceiving you.  Both his front wheels literally FELL OFF THE CAR at 180mph.  Don't believe me?  Here's another view: 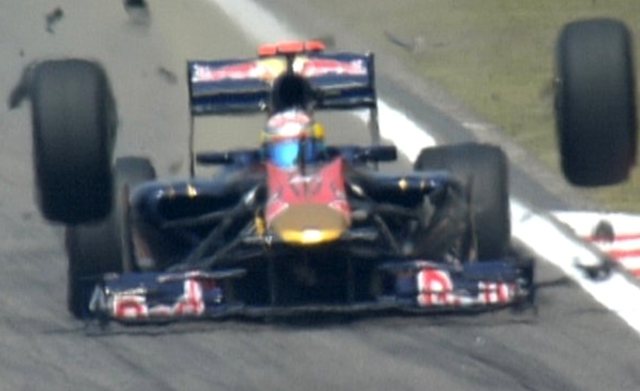 And, just for the heck of it, here's video of the incident:
The upright, which is what connects the wheel to the suspension, on the right front corner completely failed.  This transferred all the weight of the front of the car to the suspension on the other side, which then exploded.  Buemi was unhurt in the rather bizarre incident, but his car was pretty much ruined.    Seems the uprights were made of a new material... which, of course, Toro Rosso has now thrown in the trash.  Remember, this is Toro Rosso's first car as a constructor, so one might expect a little of this... though not, perhaps, quite so dramatically.  The team is expected to have a new chassis built up in time for quals.

Speaking of which, we'll see you here tomorrow morning for those results!

UPDATE:  Sebastian Buemi is now the early favorite in the Quote of the Year contest: "From in the car it was not a problem. I just lost both wheels."  Nope, no problem there.

1 Buemi's car should have had tethers that were supposed to try to keep the wheels near the car even if those wheels came astray.  Tethers snapped instantly per the footage from the in-car, though!  At least one wheel made it beyond the catch-fence, too.

3 That was really scary to watch. Watched at normal speed, they seem to fail at exactly the same instant. I suppose that if you single-stepped through it you could see that sequence of one failing and then the other, but it sure isn't obvious at speed.

Part of what's scary about it is that the second one failed so rapidly. It has to have been just below its critical failure point anyway for it to die that fast once the force was increased on it.

The scariest thing of all is that one of the tires bounced into spectator territory. It's really a blessing that no one was hurt or killed.