Name That Mystery Ship XXXIII It's been seven months since the last Mystery Ship contest... which is better than a year, like the previous entry... so I think it's time once again!  Name this mystery ship: 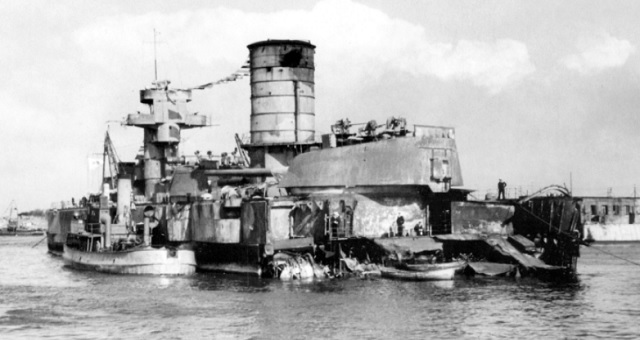 As usual, no image searching.  I can't stop you from doing it, but you'll have to live with it on your conscience forever.  As is also usual, CTX and FDM are on the leash until I let 'em at it.  You get one guess, and one guess only, so make it count.  Winners are determined by me, my decision is final, so don't push it, 'k?  The winner gets his or her very own blog post on a topic of their choosing (exceptions: pr0n, politics, and religion).
This one might be easy, but we'll see.  Good luck!

1 That's either a set from Water World, or the concrete battleship in Manila bay.

2 I expected someone to post the answer by now.  I figured it out, but I also checked my answer to see if I was right.  I don't ever *know* any of these, or even have a good idea...I just use details in the picture to try to figure out what they are.  This time it worked.

3 So what's your answer, Ben?  You neglected to mention that...

4 Oh!  I wanted to give people who know more than I the opportunity, since I checked my work against the internet.

It's the Petropavlovsk, later renamed Marat.  It was a real ship, and and also a real rock (sort of).  It was struck as Volkhov, to finish out her official names.

My research was based on "That's at least parts of a late-19th Century; maybe very-early-20th Century, very large ship; so likely a battleship.  That also appears to be a rock.  What battleships became rocks?"  That's a very short list.

5 I know the answer too, but only because of some non-naval background that gives me an unexpected advantage -- only in relation to this specific ship.

6 We've got a winner!  And, unless my memory fails me, a first-time winner to boot!
You get a post, Ben.  Lemme know what you want when you figure it out.

7 Speaking of prize posts: back on March 2nd, in "Why A Duck: The Story Of An Obsession In Five Acts, Act I." you ended with "Next time, Act II and more."... and then went silent.

8 That should be taken as neither an accusation nor a demand, btw.  But I would love the read more, and it seemed you enjoyed writing that first part.