Now I usually admonish anybody from drawing conclusions from times run in practice, but these practice sessions are very different than normal.  Testing in the off-season has been limited, and from here on out, it is banned entirely.  No longer are Friday practices just for checking fuel mileage and tire wear... now it's the only chance you get to give "fixes" a trial run, or to get used to the car at all.  Everything is a long-distance speed run, practically at race pace.  It has to be, because you can't rely on the third driver to put 500 laps on the T-Car (archaic term, I know) while the engineers change the angle of a fin from 14.22372o to 14.22375o.  So at least for the Australian practice sessions, you really can start to make legit predictions about how the cars are going to perform in the race.

And, to be blunt, it ain't lookin' good for the two teams that won championships last year.  Ferrari ended up with the 10th- and 11th-fastest times, over a second behind the leader's pace.  McLaren was 17th and 18th, over 1-3/4 seconds behind, and in the cases of both teams, it didn't look like flukey... they looked slow.

Particularly the Glare With Wheels.  Who knows exactly what's wrong, but only once did either McLaren look racey... and that was when Lewis Hamilton was pushing the car waaaaaaay beyond what it could safely manage.  That he managed to get most of a lap in at that pace before the rear end stepped out on him says loads about his ability... and that he was able to gather the car back up after the Glare tried to kill him also points out how good he is.  However, the fact that he had to fight the car tooth-and-nail just to stay alive points out how bad the McLaren is.

Ferrari looked, and was, faster out there, but having said that, they're still not good.  Massa and Kimi went off countless times, and Massa in particular had one moment where... well, the rear of the car had gone so far out that it looked like it was trying to emulate an old Dead Or Alive song.  And HE saved it, too... how is entirely a matter of conjecture.

So who looked fast?  The Diffuser Three.  Williams' Nico Rosberg set a time of 1:26.053 for fast lap, but it wasn't just a one-off... he was consistently around that time all day.  Second was Rubens Barrichello in the Brawn F1, only 1/10th of a second behind.  Third was Jarno Trulli in the Toyota, about .200 behind Rubens.  Mark Webber's Red Bull snuck into fourth quickest, but then came the rest of the Diffuser Three: Jensen (Overrated?) Button (Brawn), Timo Glockenspiel (Toyota), and Kazoo Nakajima (Williams).

The best HWMNBN could manage was 12th, with the two BMW-Saubers right behind Giancarlo Fisichella's 13th-placed Force India.  Adrian Sutil's FIndia was on top of the timesheet for a good chunk of the day before declining to 9th.

The day belonged to the three rebel teams... now to see if they can do it in Quals on Saturday!

In other questions answered on Friday, Avatar's query about lighting with a 5pm start turns out to be excellent.  The 2nd Practice on Friday began at 430pm local time, and by the end of the day, the sun was right in the drivers' eyes as they came down the front straight, and shadows were ugly all the way around the circuit.  It'll be a definite concern.

Another question that was posed by Steven about KERS and can it be charged at the beginning of the race, or what?  Turns out it CAN be charged before the race, even before it leaves the pits.  The bad news is that it takes about two hours.  The worse news is that it's such a sensitive process that if it's done just the teensiest bit wrong, it could burn out the batteries used in two-and-a-half of the teams.  Williams is using a flywheel system, so no batteries there.

Yes, two-and-a-half teams.  McLaren, Ferrari and one of the BMW-Sauber cars.  The other BMW, the one driven by Robert Kubica, will not have KERS installed.  Turns out theres an excellent reason for that: Kubica (fatso that he is), weighs more than his teammate, Grizzly Nick Heidfeld, and the extra weight of the KERS system PLUS Kubica's lardbutt would counteract any advantage it might give.  Let's take a look at the Big Guy, shall we? 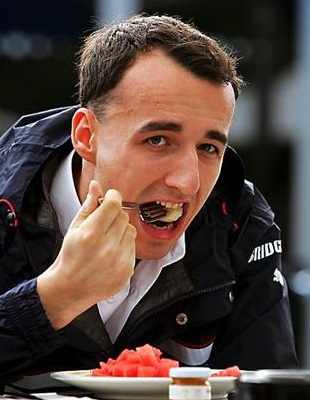 They can't even keep him away from the buffet long enough to take a photo of him... just horribly disgraceful.  How can he look at himself in the mirror?

Oh, it's gonna be a FUN season!

And now we know why the protests were filed. If they're refused eventually, there's gonna be some frantic redesigning going on in the rest of the teams.

...from here on out, testing is banned entirely.

Why did they do that? To try to make the sport more competitive? To reduce budgets and give rich teams less of an advantage?

One thing it seems to me is that this will increase the number of accidents. I hope that's not what they're after, though.

I would be surprised if the redesigning wasn't going on as we speak.  The problem is that other teams wanting to play with new-style diffusers can't test them on track until the next race weekend... they'll be playing catch-up, while gambling their whole race on getting the new diffuser right the first time out.

Rumor has it that Toyota actually had "legal" diffusers in a crate, just in case their "illegal" one got banned.  Brawn and Williams, being somewhat less cash-infused, didn't have replacements.

They banned test sessions outside of the race weekend to reduce costs, by the way.