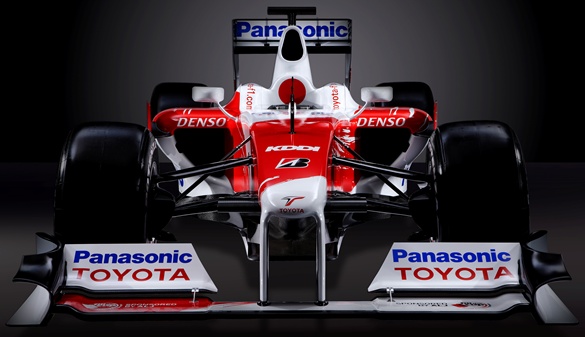 Pretty.  Loser, but pretty.
The F1 rollouts continued today with Toyota debuting their 2009 charger, the TF109, with a full multimedia blitz.  If you're interested in seeing their faux-movie trailer, The 2009 Contender, just click HERE.  There's some very well-done movies there, including a video of glamour shots that's actually well-worth watching if you like F1 Pr0n.  Jarno Trulli's acting will amaze you...

Let's look at some still shots of the car...

Me likey.
I really do like the new-look cars.  Modern, but without all the flanges and wingdoodles and the glavins!  CLEAN.

Buttons asks if the front wing is adjustable from the cockpit now... and the answer is yep!  Twice a lap, the drivers can make a manual adjustment to the nose wing, over a six-degree angle.  Should make passing a little bit easier.  Other rules changes include an engine having to last three races (from two last season), teams only getting eight engines per car per season (which makes you wonder what'll happen if they blow eight in eight races...), the addition of KERS (Kinetic Enegery Recovery System, a system that draws energy from braking and applies it to a battery or flywheel... which can then be used in a push-to-pass system, which'll add about 80hp when engaged), limiting the engines to 18000rpm (from 19000 last year), and of course, slick tires. 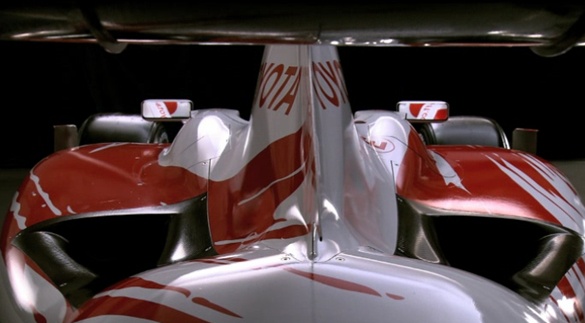 I agree that the new cars look a lot cleaner.

Are they permitted to charge the KERS before the race begins? So that they can use it at the start?

2 According to the 2009 Technical Regulations, the KERS may be used at any time during the race, but the total energy use per lap "may not exceed 400kJ."  The relevant Sporting Regulations entry only says that the KERS cannot gain power when the car is unmoving (i.e., in the pits).

Near as I can tell then, it can be charged and ready to go when the lights go out, as long as it charges on the track.  Leastwise, the rules don't specifically prevent it, and even if the KERS was bone-dry when the car left the pits, it'd get two full laps (recon and formation) to charge before the race started.

Well, then, that should make the starts even more exciting, eh?

If it takes a lot of braking to charge it up during those two laps, I wonder if we'll get accidents when people rear-end others who are aggressively charging?

Another sleek look, although it's hard to look much sleeker than the new Ferrari.