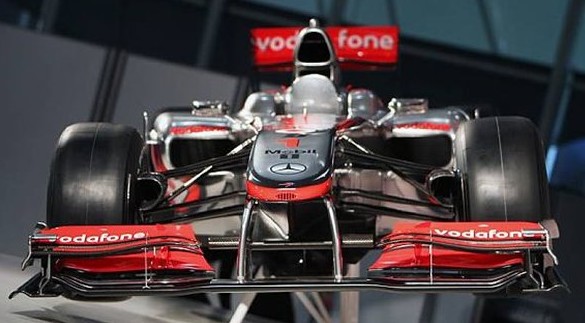 From the front, McLaren's 2010 challenger doesn't seem too different from the 2009 car.  The nose is higher, but the betting line is that that'll be the norm this season (with the wider front tires last year, the lower nose allowed more ballast to be placed up front.  This season's narrower tires will require a better balance all-round, so the high nose won't hinder anything).

It's when you look at the side view, though, that you realize that we're looking at rolling artwork as much as high-speed racer...

Baby!  *wolf whistle*  Lots of visible changes here, but none more obvious than that fin.  Look at last year's MP4-24 in comparison:

The new chassis' sidepods sweep down towards the rear tires, quite unlike last year's.  We're also seeing the return of bargeboards (under the "a" in "algo"), which I thought were still illegal, but I guess not. But wow, that fin just dominates the appearance of the car, and it's a nice look to my eyes.  What'll it do?  Cripes, I dunno, and I'm not sure the McLaren engineers know either, but we'll find out soon.

The area behind the cockpit is more cylindrical in look now, no doubt because of the larger fuel bladder requirements.  The air intakes are practically rectangular this year, and higher off the ground... they must have a lot of confidence in their cooling system, because that positioning might cause some problems otherwise: they're smaller, and there's gonna be a lot of disturbed air coming off the front tires.

I had to stitch this one together; sorry about that.
Darned if that isn't the best looking paint job around though!  The Glare With Wheels 3.0...

1 I really really like that fin. Has anyone ever done that before?

2 The Red Bull RB5 had a long fin by the end of the season, but not quite like this one.  So, yes, I guess it has been done, but there's something about the McLaren fin that's different.  I can't quite put my finger on why.

Ah, I got it.  This one looks like it connects to the rear wing; the RB5's didn't.

I believe the fin is designed to control yaw in and smooth out airflow the concept has been around for a few seasons now but Mclaren Merc have never run with it. could be using it to cure last years rear downforce problems.

5 When Red Bull introduced the fin on the RB4 back in 2008, the thought was that it improved stability over the rear under braking.  The Legendary Announce Team predicted that it'd be copied quickly, even if nobody had the slightest idea why it worked or what it did, because that's the way F1 design works.

Everybody steals from everybody else.

7 The Pond's official nickname for SPEED's F1 announcers.  They're quite good.

Ahhhh I guess I'm just used to the BBC commentary and presentation team.