F1 Pr0n: McLaren MP4-24! I have to admit that I'm disappointed with McLaren's rollout today.  Practically no glamour shots (which makes the job of presenting F1 Pr0n difficult), just a car on an angled podium.  Still, it's the new edition of the Glare On Wheels, so here we go... 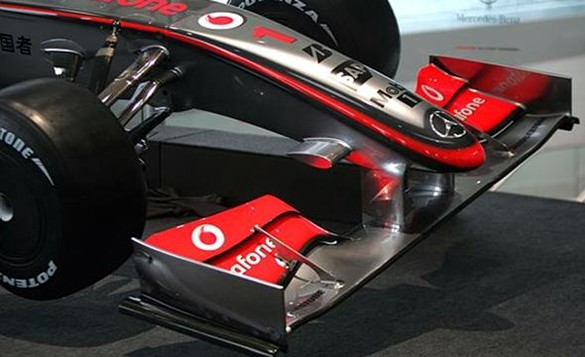 A more involved nosewing than that on the Toyota and Ferrari with a two-element flap system (the red parts).  Only the upper unit can be adjusted however, as per the tech regs. 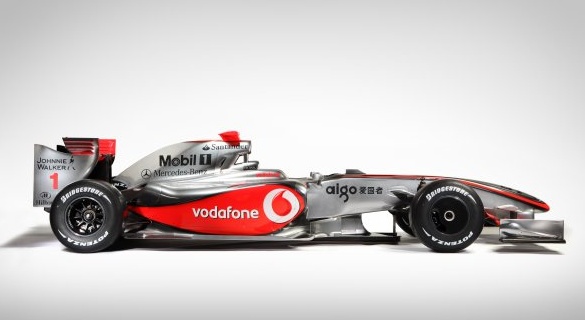 In many ways, the annual McLaren racer was the worst of the offenders when it came to the various widgets slapped on to improve aerodynamic downforce.  As a result, the new MP4-24 looks even more tidy than the other two new rollouts. 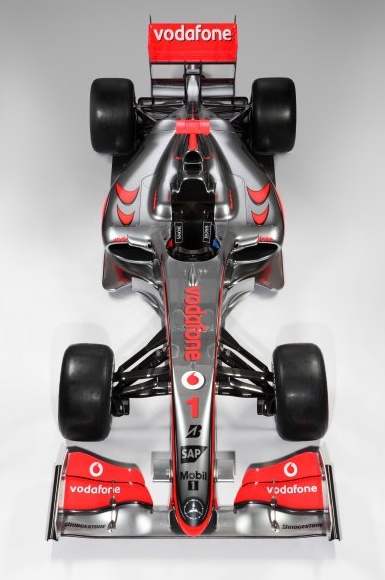 If you're unsure what I'm talking about, take a look at the MP4-23.  As always, the cars are NOT to scale with each other. 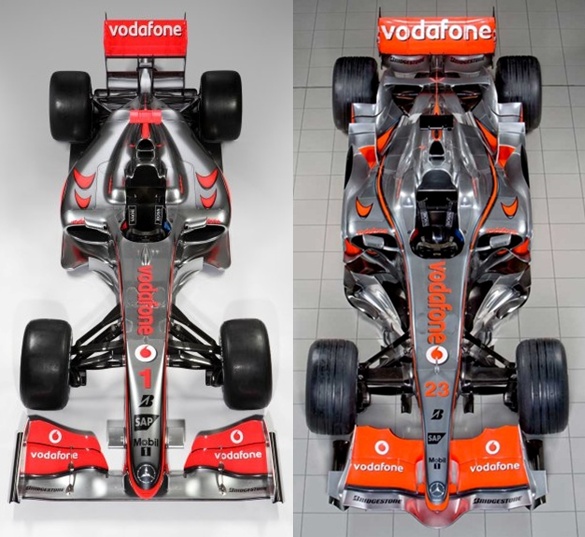 MP4-24 on left, -23 on right.
It turns out that McLaren had good reason to be distracted during today's rollout, that being the news that team principal Ron Dennis has stepped down.  He will be replaced by Martin Whitmarsh, the CEO of McLaren Racing.  Considering the hell the FIA has put McLaren through the past few years, I don't blame Dennis in the least.  His leaving the position may actually help the team, as he was accused of being in on the great Stepneygate scandal that led to the team being slammed with a $100million fine and exclusion from the 2007 constructor's championship.

So Dennis steps down, Whitmarsh (at one time a materials specialist in charge of the Harrier jumpjet construction team for British Aerospace) takes his place.  Renault has their rollout on Monday, assuming that they're allowed to do it.  The car failed two of the three FIA crash tests earlier this week (side and rear, supposedly).

That's not uncommon, to be honest.  It could very well be that by any reasonable assessment the car is perfectly safe.  The FIA, for all its faults, does have very stringent safety rules in place for the protection of the drivers, and it's not like the car shattered like a wine glass dropped from the Sears Tower.  It'll be fine.  Probably.

Thanks for the photo comparison with last year's car.  It is much sleeker.  Still, Ferrari gets my award for purdiest 2009 so far.  :-)