F1 Pr0n: Ferrari F2012 You know something's kinda wrong when no less a light than Stefano Domenicali, team principal for Scuderia Ferrari, comes out and publicly says "Well, actually, it’s not really so pretty from my personal perspective.  But this is a value that doesn’t count in Formula 1... ...as our chairman has already said the fact that it is ugly or very nice doesn’t count a lot. The most important thing is that the car has to be performing."  In other words, "winning fixes ugly."  Having said that, Ferrari better win a lot of races this season, because the new F2012 is a lot of ugly.

Though to be honest, from the front it looks not so bad at all.  The front wing is supposedly evolved from the flexi-bendy wing they ran at the end of the 2011 season.  For their sake, I hope they got the "oscillating like a USGS seismometer in a magnitude 9.5 earthquake" feature fixed.  There were times when I wondered how the Red cars were able to stay on the track, even going in a straight line, because of that wing flapping like an ornithopter.

From the side, it still doesn't look so bad.  Like the McLaren, there appears to be an angle (back-to-front) to the floor.  The sidepods are deeply undercut, more like the Force India than the McLaren, though not the same sort of profile.  Amazing how so many teams can do the same thing, but come up with completely different designs.  It'll be interesting to see which one comes off the best.  One thing that comes back from past designs is the weird double rear bodywork thingy on the engine cover.  I've never been fond of that design element, and it doesn't look any better here.  It looks like the engine cover came off the sprue badly and nobody bothered to trim the flash off. 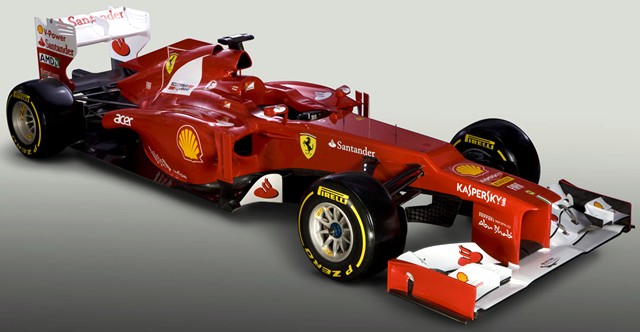 ...and now the hideousness of the nose becomes apparent.  Yeesh... if anything, it may be worse than the Lotus Caterham and the Force India solutions.  However, this does raise an interesting question: just how did McLaren's nose fit under the technical regulations while a team like Ferrari does... this?  Interesting that there's another fin between the front wheels; haven't seen that before, have we?  According to the team, the car is almost all brand new, with very little coming over from the F150° Italia.  I gather the rear wing is pretty much the same, with just some very minor tweaking.

The Scuderia was to have a huge blowout at the Ferrari factory at Maranello, followed by a few laps at the team's test track, literally right across the street.  One little problem, though: it's been snowing in Northern Italy.  A lot.  So instead of the big media presser and hot laps, we got... well, this:

I'm pretty sure they trucked it to the track.  I mean, could you imagine driving a F1 car... in the snow... on slicks?  I suspect the car would be in the wall, on its back, and on fire, within a few feet.

Renault Lotus is next up on Sunday, followed by a F1 MegaPr0n on Monday, when Sauber, Toro Rosso, and defending constructor's champion Red Bull all roll out.  See ya then!

1 What's that thing on top of the air scoop? Force India has that, too, but McLaren doesn't.

2 > I suspect the car would be in the wall, on its back, and on fire, within a few feet.

You say that as if it were a bad thing...

Steven I think you are referring to the T-Bar?  As far as I know it's a standardized FIA-mandated thingie to hold the on-board camera. McLaren will have one too when they go to race; the car as unveiled has a bump where the standard T-Bar will eventually mount.

That nose bump is horrifying.  Caterham and Force India have a sculpted channel down the middle of their bumps, but the Ferrari just has a big honking ramp right there across the nose.

I can't wait to see what Red Bull does this year. If Newey doesn't go for the bump, I think the other teams are going to be second-guessing themselves.

3 As FDM says, the T-Bar is a required camera mount, designed to be aerodynamically neutral.  Every car has one, even if (like McLaren) they don't have it in the glamour shots.  It's usually the easiest way to recognize which driver's car you're looking at, too; the "team leader" had a red t-bar, the "second driver" a yellow one.  For example, please see this picture from the 2011 GP of Canada, with Jenson Button (yellow) and Lewis Hamilton (red).

There are usually a few other camera points on the car; the FIA will choose more-or-less at random what car gets what camera at what location.  If you look at this picture, you'll see a camera mounted just forward of the front-right suspension.

4 That thing looks like a major source of drag and turbulence, but if everyone has one then of course it's equal.

5 Grace & Formula One
A old axiom in aircraft design is if it looks right it will fly right. Witness the Lockheed & Boeing battle with the F35 looking right and winning the contract. I must say the cars so far are a disappointment except for McLaren, it does has some style and grace. I wonder if the FIA set this up to discommode Darth Bernie as I'm sure the fans will hate how Ferrari especially looks.

A old axiom in aircraft design is if it looks right it will fly right.

It's also bogus. The Brewster Buffalo looked good, but got slaughtered in the air. On the other hand, the P-38 looked awful, but flew really well.

7 I'd argue that the Buffalo looked more like a beer keg with wings, but agree with you about everything else.  I've heard the axiom used in regards to aircraft, ships, cars, you name it, and for every time it's been true, there's a HMS Hood or Fairey Gannet.

One should not read anything into the fact that I chose two pieces of British equipment.

You should check out what Tim Blair has to say about it:

9 The unique pullrod-type FRONT suspension is explained by Mr. Fry as having center of gravity benefits. I suppose it makes some sense, if you have the place where to put the driver's legs.