F1 On SPEED: Hungary! Ahhhhh, it's nice to be done with the races being on Fox... I almost missed Smarmy Windsor's gridwalks.  Almost.  Still, having the half-hour pre-race show back is worth the short exposure to Smarmy.

In 2007, the Grand Prix of Hungary became the first F1 race I'd missed since I started watching again in earnest... Monaco, 2004.  Heavy thunderstorms overnight knocked out The Pond's satellite signal completely; I wound up recording three hours of blue-screen.  By all reports, I didn't miss much.  That's the problem with Hungary, I'm afraid.  Much like Mangy-Curs in France, the Hungaroring is a "processional" track: 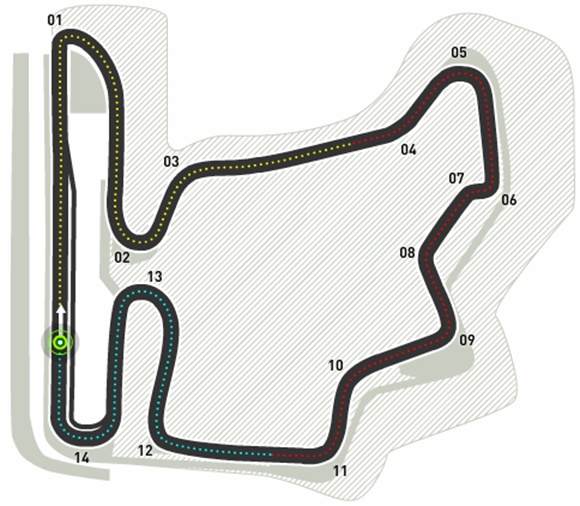 With only one real passing location (turn 1), no long fast runs other than the front straight (which is only 700m long), and a plethora of slow turns, the Hungaroring is actually similar to the twisty circuit at Monaco.  Indeed, the lower-budget teams run the same car that they did at that street circuit (except for the special front suspension).  It's a high downforce circuit, in other words.  You need the grip bonus more than you need top speed here.  In fact, there's only one true high G-force turn here, turn 1, and it doesn't even hit 4.0g, more or less.

In other words, potentially a yawner of a race.  However, in 2006, the rains came.  The result?  Jenson Button won his first (and so far, only) race, HWMNBN lost a wheel when a lugnut fell off, Kimi Raikkonen plowed over Vitantonio Liuzzi for no good reason whatsoever, and rookie Robert Kubica debuted, replacing Jack Newhouse, and finished 7th before he was "excluded" because his car was 2kg underweight.  A wild race, and one we can hope will be repeated this year.  Without traction control, we might even get that sort of result WITHOUT the rain.

On Friday, SPEED brings us live coverage of 2nd Practice, from 7am to 840am.  We'll start to see just how the cars perform here without TC... and if McLaren can continue their charge and close the gap to Ferrari in the Constructor's Championship.

Saturday, we get to see just where everybody is on the all-important grid, with plausibly live coverage of Quals from 7am to 830am.  Unless we've got rain, it'll likely be one of the two Ferraris or Lewis Hamilton on pole.  I suppose it's possible that BMW might sneak into the pole position, but I wouldn't bet on it.

Finally, Sunday brings us the Hungarian Grand Prix LIVE from 630am to 9am.  Will we get a Zsolt Baumgartner sighting?  Please?  We miss Zsolt.  SPEED will replay the race from 130pm to 4pm in case you can't drag yourself out of bed at 630am... like me.

Good news, however!  It's looking like Vaucaunson's Duck, long-time friend, will be visiting The Pond for the race.  This will delay the F1 UPDATE!, but that's the way it goes.  Seeing a friend I've not seen in about a year takes priority.  Stay tuned for more info on Hungary as it becomes available!

But most of all, I've missed the early morning races.  It's always more fun to watch them live rather than on "memorex."