F1 on SPEED!: European Grand Prix at Valencia 2009! As the F1 Circus reawakens from its midsummer slumber, we find ourselves headed to Valencia, on the east coast of Spain, for the European Grand Prix.  It's the second year for this track, and one can hope that we'll have a better competition than we did for the inaugural race.

Let's take a look at the track map, shall we? 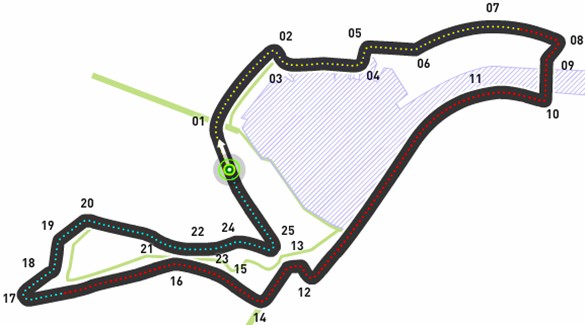 Deemed a "street circuit," since most of the course runs through and around the marina district of the city, we discovered last season that it really has little in common with real street tracks like Monaco or Singapore.  The streets are wide and mostly smooth, there's plenty of runoff area where it's needed, and other than a stray pigeon or two, there's not a whole lot of drama to the circuit.  In other words, it's a Hermann Tilke course.

Of course, that was last year.  This year, if you remember (it has been a while since we last had a race, after all), we had a whole raft of rule changes that may make a difference.

The signature of Valencia has to be the gazillion turns.  Sure, a few of them a hard to consider an actual turn, per se (21, 22 and 23, we're looking at you), but 25 is the definite record for modern circuits (no, I'm not counting the old Nordschliffe).  Visually, the bridge between turns 9 and 10 is probably the highlight, though it does have competition in the form of the marina and the nicely renovated buildings attendant to it.  Since it was the harbor for the 2007 America's Cup yacht race series, the city did a lot of beautifying to the marina area, and it showed.

However, at 200mph, you don't get to see much of it.  Further belying its so-called street circuit origins, Valencia is a low downforce, high-speed track.  As a result, it is hard on the brakes.  Turn 12 in particular is a test of the carbon-carbon pads, where the cars have to slow from a track-high-speed of about 201mph down to around 80-90mph.  All this abuse is quickly followed by turn 17, where they do it all again though only from about 160-180mph.  For all the go-fast-stop-go-fast-stop-go-fast nature of the circuit, though, it's relatively easy on the engines, though Kimi Raikkonen might disagree with that assessment.

Fortunately for the organizers of the race, Renault's one-race suspension resulting from HWMNBNed wheelless excursion in Hungary has been lifted, meaning that Spain's favorite son will be able to race in Valencia.  Perhaps he'll finish a lap this time.

Thankfully for all involved, the TV coverage returns to where it belongs, on SPEED Channel, for the rest of the season.  Their regular excellent coverage begins on Friday morning from 7am to 840am, with live coverage of the day's Second Practice session.

After that, we get Quals on Saturday morning, plausibly live, from 7am to 830am.  Later that night, though, Legendary Announce Team member Steve Matchett takes on a tour of the Ferrari factory in the special show "Ferrari: A Look Inside," from 11pm to 1130pm.  We don't often get a chance to see the inner workings of a F1 team's factory, and doubly so for the secretive Scuderia Ferrari, so this might be very interesting viewing indeed.

Of course, we here at F1 Update! will be all over the race with our usual sterling coverage.  Ahem.

In one last bit of news, Felipe Massa is recovering very well indeed from his head injury at Hungary.  In fact, there's some rumblings coming out of Italy that he may very well return to the cockpit of the F60 in time for Monza, two races after Valencia.  If so, that'll be one of the great medical miracles of our time, considering the multiple skull fractures he suffered.  While I hope he really is fully healed less than two months after the accident, I suspect that it's just the Italian press trying to stir up some circulation numbers.  After all, Slappy Schumacher's accident was six months ago, and he wasn't able to stand the gaff, though the neck gets a tougher workout in a F1 car.

Either way, the fact that there's even a chance the doctors might okay him to race again this season is incredible news.  I wouldn't've put a wooden lira on that bet four weeks ago.

Great preview of the race!!!

Great news about Massa, as well!  That said, I hope he's not being too ambitious and coming back too soon.

2 I'm glad that Massa is doing so well, but he and they would have to be insane to let him drive again this year.

3 I remmeber how Hakkinen broke his skull's base and went on to become the World Champion the next season, so things happen.

4 Next year would be fine. But two months after the injury is just too damned soon.

5 Massa himself is now saying that he's going to try for a comeback in Brazil, his home race and the last one of the season.  In a class move, he also thanked the AEK Hospital in Hungary, where he was taken after the accident.

6 BTW, Webber admitted in the press-conference after the win that he wasn't really ready to race at the start of the season, but basically just toughed it out. And it was only a leg, not a skull.