F1 UPDATE!: European Grand Prix at Valencia 2008! New track, new street course in fact, but did it bring us excitement?  THIS is your F1 UPDATE!

*STOP US IF YOU'VE HEARD THIS ONE BEFORE:  During the Ross Brawn/Slappy Schumacher era, Ferrari was known for many things, but one huge reason for their success was that their cars were practically bulletproof.  They practically never broke down, and when they did, it wasn't the engine.  In the post-Slappy era, Ferrari hasn't been quite as invunerable, but they've been pretty solid.  Today, Felipe Massa had a brilliant start from pole, then ran away from everybody.  Lewis Hamilton managed to stay in contact with the Ferrari, but couldn't manage to close an ever-widening gap.  With that gift, Massa had the race in the bag.  And then... 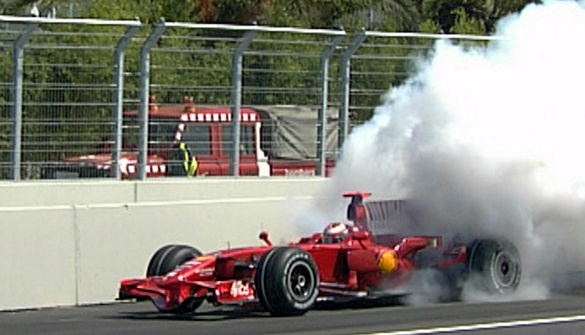 Kimi Raikkonen's engine went splat.  Massa, untroubled, finished up the race by increasing his lead every lap, and eventually won an easy victory.

*MORE PITLANE PROBLEMS:  Last race it was a rash of fires stemming from refuelling rig problems.  This time around, it was Ferrari's newfangled system of lights connected to sensors on the fuel hose.  First, in autonomous mode, it let Massa out of his second pitstop just as a Force India car was pulling by... resulting in a $10000euro fine.  Then on his second stop, Kimi left before the lights told him to, knocking over three mechanics (fortunately, only one of them was injured, and that only slightly despite the reports of him being stretchered off).  Neither incident would likely have happened if there had been a "lollipop man" controlling the stop.  Ferrari might want to reconsider this whole lighting scheme...

*...AND YET, THERE'S NO AMERICAN SPOT ON THE CALENDAR:  Spanish fans packed the grandstands at the new circuit today... until the first lap incident that knocked Spaniard HWMNBN out of the race.  10 laps later, there were visible blue seats.  20 laps after that, whole sections of the bleachers were empty.  What will happen when their hero isn't racing anymore?  Darth Bernie, please note that the USGP routinely had the largest turnout of the year, even though there wasn't an American driver to root for (except for Scott Speed, which doesn't count, because nobody rooted for him).  Just something to keep in mind...

*DRIVER OF THE RACE:  Felipe Massa.  The only way anybody was going to catch him today was if he screwed up somehow.  He didn't.  Not once (until the post-race interviews).  End of story.

*TEAM OF THE RACE:  Toro Rosso.  Sixth and 10th doesn't sound like the usual TotR performance, but when it's one of the usual backmarkers, one begins to understand the award.  Nice job, guys, but you should have kept the Minardi name going.

*MOVE OF THE RACE:  We hate to say it, but none.  There was no passing to speak of today... in fact, this was actually a pretty dull race on-track.  Nice layout, though.

*MOOOOO-OOOVE OF THE RACE:  By all rights, Kazoo Nakajima deserves this for running into the back of HWMNBN on the first lap, but we here at F1 UPDATE! were all too amused by the shadenfreude.  So instead, this award goes to Ferrari for their travails in the second round of pitstops.  Not only did they let Massa nearly get his car ruined by a Force India, but they also had Kimi run over a couple of their pitcrew, THEN he blew his engine in the next lap.  Niiiiiiiiiice.  Here's your Moooo-ooove!

"...not very clever of (Adrian) Sutil in the pitlane, was it?" - Felipe Massa (note: paraphrased quote, as we can't find a transcript.  What does he expect Sutil to do, jam on the brakes before he gets to Massa's pitbox and wait for him to leave?  Phil, you won the race, be gracious.)

"Sure, I finished 2nd, but guess who's still leading the Driver's Championship?" - Lewis Hamilton

"I saw a white plastic bag flying across the track, but could not avoid it and it went under the car. I couldn't steer for two corners, which was extremely dangerous." - Robert Kubica (note: real quote.  Who knew that a plastic bag could disrupt a F1 car's steering?  Wethinks Robert is exaggerating a wee tad...)

"A podium would have been nicer, but I'll take what I can get.  Thanks, Ferrari!" - Heikki Kovaleininninninnie

"Incredible!  A perfect day!  AND I was dueling with Kimi, too.  Watch out, Toro Rosso comin' thru!  Woo!" - Sebastian Vettel

"This was one of the worst races ever for me. To finish ninth in a car which is obviously good enough for third is a disaster." - Grizzly Nick Heidfeld  (note: real quote.  We're coming to expect this type of thing from Grizzly Nick in the race, though...)

"Remember Australia?  That's been my only result better than this one.  I used to win Championships, now I'm getting excited over finishing 10th?  Shoot me now." - SeaBass

"A road course without a safety car?  Who knew?" - Mark Webber

"Aha!  See?  I'm not the only Force India driver that screws up!" - Giancarlo Fisichella

"It was a poor weekend overall... which, really, shouldn't come as any surprise, since pretty much they've all been poor weekends.  Except for that podium.  That one was good.  But other than that?  Electrolux, baby." - Rubens Barrichello

"Pants.  Get off my asphalt." - David Coulthard's Chin

"I'm disappointed." - HWMNBN (note: who showed a lot more class than Massa, even though nobody would have said anything if he had decided to blister the ears of Kazoo.  Dear god, did we just pay HWMNBN a compliment???)

And so, we leave Valencia in the rear window and head off to Belgium in two weeks.  We'll see you at Spa-Francopants!

1 So the bridge didn't turn out to be a problem?

2 Not that I've heard about... no blown tires, no broken suspensions, I didn't even notice anybody blowing turn 10.  A lot of smoke, no fire.

Kimi must be wondering if Ferrari will "retire" him for the less costly (in many ways) Vettel.  That was a nasty-looking accident in the pit stall.

I liked the Valencia course, but whoohoo--Spa is coming up!

4 I love the way everyone referred to Valencia as a "beautiful city"... would that be beautiful for an industrial hub with a massive container port as your backdrop? And the legendary announce team said it gets more industrial the farther you get from the shore! Highlight of the race for me HWMNBN standing next to his car in the garage. Looks like it would be a fun track to drive, but it wasn't very exciting for racing. My formula for more overtaking... ban carbon fiber brakes! That would increase the braking distance allowing for more "outbraking" going into the turns. And the FIA could say they're doing it to "cut down on costs".