F1 on NBCSN: Japan 2014 UPDATED! Japan.  The Land of the Rising Sun.  Also The Land of My Favorite F1 Circuit.  Let's take a look at the wonderful Suzuka, home of the 2014 Grand Prix of Japan: 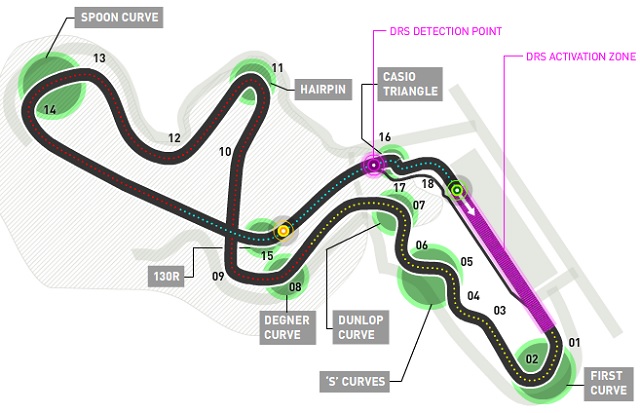 The only figure-8 course on the calendar, Suzuka is close to being the perfect blend of fast and slow, the technical and the flat out.  All of it attended by the fanatically rabid F1 fans of Japan, Taki Inoue's opinion notwithstanding.  We can generally count on some weather showing up, as well... they weren't called the Great Suzuka Boat Races for nothing, after all.  This year, though, we get an extra-special dose of weather: volcanoes!  Mt Ontake, Japan's second tallest mountain, erupted this past Saturday, killing at least 30 and spewing ash high into the atmosphere.  At last check, it's still doing so.  Flights into and around Japan have been affected.  Suzuka is less than 200km from the volcano, so it's hardly a stretch to imagine ash making it to the track... does one use Inters or full Wets for lava?

In less serious news, our friends in the Legendary Announce Team will be providing coverage on NBCSN all weekend, and the times are even close to being watchable by a human being!  Let's take a look:

Yes, that's right, coverage of the race begins Saturday night!  I'll surely be staying up to watch all of these... I've gotten used to 2am bedtimes again... so who knows, there might be some liveblogging going on, too.  We'll see!

UPDATE:  If the volcano bit wasn't enough, there's a typhoon!  Typhoon Phanfone is predicted to skirt the eastern coast of Japan over the next six days or so, passing by Suzuka/Nagoya sometime Saturday night or Sunday morning, roughly speaking.  When it does, it's predicted to be somewhere in the vicinity of a Category 4, dropping to a Cat 2 by Sunday night.

Maybe there won't BE a Grand Prix of Japan this year...

1 Steven, I'm sorry, I accidentally deleted your comments when I was spamcleaning.  Yes, volcanic ash would be a disaster in F1 engines.  They do have filters, but they aren't even as good as the ones in street cars; they're designed to keep pebbles and tire chunks out of sensitive bits.

But there's also a good chance that any ash that falls will be washed away by the typhoon, so there's that.

2 I wonder how this will affect the race?

The Caterham F1 team office has reportedly been raided by police, according to Emma Buxton. It's unclear as to what exactly triggered the law enforcement action, but the team has been in extremely dire financial straits.

3 Wonderduck, things happen. Not to worry.

4 JP, Caterham seems to be saying that one of their suppliers were raided; the team was not involved otherwise.  Further, the team is in place and in the paddock in Japan, suggesting that they're ready to go.

This is somewhat different from SuperAguri's situation, where they were not allowed into the paddock in Turkey, then shut down.

My guess is that Japan will be their last race.  If it isn't, they'll last the season, then quietly go to the creditors.  Barring, of course, a legitimate buyer/investor.

5 I don't know, it seems things are worse than Caterham is letting on.

'By order of The Sheriffs Office, authorised High Court Enforcement Officers, we hereby announce the impending sale of goods seized and removed from a Formula One team.

The goods include but are not limited to:

TVs, monitors and other goods and equipment

The goods are to be sold by public auction to the highest bidder.

Sale by private treaty may be permissible with leave of the court.

The date and location of the sale are yet to be confirmed but early indications are mid-October at a UK location.'

I wonder what the shipping costs would be for that simulator...

There's also a story up on thejudge13.com that they've got debt somewhere into eight figures, mostly to Renault and Red Bull. There's also a rumor that Caterham's crews were actually fed by the other teams in Singapore. Make of that what you will.

Considering how lousy they've performed, it wouldn't be particularly surprising if they're having trouble finding sponsors. (Or Marussia, either.)

Nobody wants to back a team which always comes in last.

7 Here's the auction notice link. That doesn't look like stuff seized from a parts supplier (I could see why they'd have pit lane equipment, tires, etc., but your simulator?)

I'll bet they have everything in place in Japan purely because it was already shipped there when stuff got seized, and I would be REALLY insistent on cash up front if I was the one providing them with supplies, food, and gas this weekend! That said, maybe they'll race because hell, they're there; if the cars are going to get seized anyway you might as well put some miles on 'em.

8 Apologies, my fault for not refreshing and taking a while to post at work.

You know, though, it's not like it's impossible to get lower-rent sponsorship. NASCAR, okay, it has way way less in the way of expenses, but you see all sorts of small-chain places advertised on those things. Surely you can get SOME kind of sponsor up on the thing, even if it's a Chinese company? Or is it just a matter of "we need X dollars in sponsorship to make the spreadsheets happy, so we can't settle for .5x or .6x, even if it means in the meantime we make 0"?

9 Avatar, there's an upper limit on how many advertiser logos they can put on one of these cars and have the logos readable by the audience. That puts a lower limit on how much they need from each sponsor in order to make all their expenses. (If there's only room for ten, then on average each has to pony up a tenth of the total.)

10 JP, I saw the info about the Caterham auction about the same time you put up that comment.  I find it a very odd website, but that's just me, I suppose.  I'm still (wait, let me check my usual places before I say anything...) I'm still standing by my prediction that they'll race in Japan, then fold.

In effect, Gandalf Kobayashi will be paying for the entire team for one race.

11 And it's beginning to look like the typhoon won't get in the way. Now, about that volcano...

12 There's some weatherfolk who disagree with you, Steven!  Two inches or more on race day?  If that happens, it won't be a race day, it'll just be a day.

13 Oh, this WILL be fun. It's dry for all the practice sessions, and it'll be dry for the quals, but they're predicting rain for the race! Wowie!

14 IIRC they have to start with the same tires they qual'ed on, don't they? I wonder if anyone will try to qual with wets, or stick to slicks and take their chances on race day?

15 Fortunately, the rules aren't THAT oppressive.  If you qualify on slicks and come race day it's raining, Race Control may decide to issue a "Changing Climatic Condition" order.  This allows teams to switch to rain tires without penalty.  In some cases, it even mandates that the teams start on full wets, period, end of sentence.

Realistically, if a team tried to qual on wets when everybody else is on slicks, there's a very good chance indeed that they wouldn't make the 107% rule, and the Stewards (though lenient usually) would probably take a dim view of the attempt.