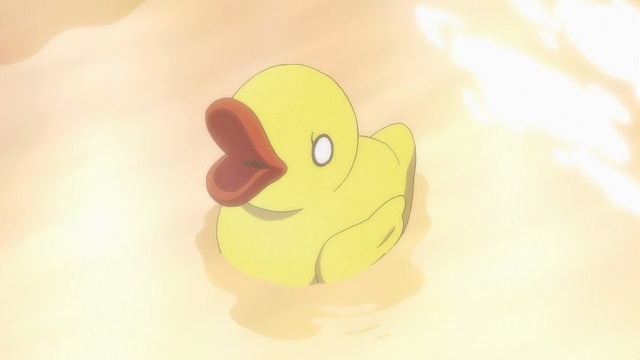 -Mahou Shoujo Lyrical Nanoha ViVid, Ep02
It's not grabbing me the way A's or StrikerS did, but at least so far ViVid has been harmless.  I was exchanging e-mails with Ben after last week's episode, and he thought it strange that there weren't a lot of fansub choices available for the series.

I think it's because the Nanoha franchise is kinda old nowadays.  The last non-movie installment, StrikerS, came out eight years ago to quite a bit of disdain amongst fans (though it's my favorite), and that's really a long time in the anime business.  People who are anime fans now like as not have never experienced the Nanoha thingy.  The two movies are graphically upgraded retellings of the first two seasons, which is great, but... y'know?  There just isn't the excitement behind the franchise anymore.

But it's got a duck, and that makes it okay with me.

1 They'd have to pay me a lot more than six bucks a minute to come out of retirement for it...

I'm liking it well enough, mostly as a kind of "oh, hey, haven't seen you in a while, how are the kids" sense.

2 Considering the dreck CR has licensed this season, even without having seen StrikerS I might have been watching this just for something less-annoying to put in my queue.

3 I thought the first episode was mostly harmless,  but the second was pretty good.   It's got me looking forward to the rest of the series.

4 GD, a really good BD release of StrikerS just hit the intarwebbz.  A's is the best installment in the series, but StrikerS is the one I enjoy the most.

Ben, I hated what they did to Soobs and Tea, my two favorite characters from the entire series.  Almost unrecognizable.

5 It's really awful. I basically did it for half rate because a) Pioneer was busily going out of business at the time and so was pretty short on cash, b) the day job at that point was working at Wal-Mart and so it wasn't too hard to beat that out, and c) I really, really like Nanoha.

Apparently Crunchy routinely pays something in that range for both timing -and- translation. At that, it's a miracle we get anything legible at all. It really ain't enough money to do it for a living.

I don't terribly mind the design changes - the old design for Tea was cuter but eh, they were late-teens before and it's been a few years. It's normal to change a little in there. (And Elio turned into a pretty nice catch for Caro...)

6 It looks like the last time Subaru went in for a rebuild, that they increased her chest size. (Or maybe I'm just imagining it.)

7 Everybody got a bit more generically fan-servicey, but I had made pretty significant allowances for people looking different.  However, Subaru and Tea have both calmed down quite a bit.  Subaru was extremely emotional in StrikerS, while Tea was strung pretty tight.  Both of them seem to be on Demerol now.

8 You'd expect that too, no? They're both decorated veterans at this point. Subaru's been playing surrogate mom/big sister to a whole pack for years, Tea's doing good at her dream job as opposed to frantic that she won't make the cut. And this ain't exactly a stress situation - nobody's flying an invincible battleship to attack the capital or invading with super-powerful clones or anything. They're dealin' with a slightly odd girl who's fond of punching things, their own punch-happy little sister gave as good as she got AND used her brain... it's a happy situation all around.

As far as the boob fairy turning up for Subaru, when we saw her last, she was either in Midchilda's equivalent of basic (very physically demanding) or training Nanoha style (the same in spades with big casino and gone all-in!) That kind of lifestyle tends to hinder development of what are, after all, a couple of places to store fat. Now that she's a little less active, puberty has an opportunity to finish up. You see the same thing with gymnasts and swimmers too.

But that's the risk with these kinds of sequels, no? The old characters have overcome, they've faced their inner demons, they're enjoying the fruits of their well-deserved rewards for valor, and... suddenly they themselves just aren't as interesting anymore. Nanoha isn't exactly the same when the biggest challenge she has to overcome is making a tasty omelette rice. It's how the show treats them when they get into a stress situation that will show the quality of the writing.

9 ...puberty has an opportunity to finish up.

She's also not wearing what's probably the Midchildan version of a sports bra.

As far as the boob fairy turning up for Subaru, when we saw her last, she was either in Midchilda's equivalent of basic (very physically demanding) or training Nanoha style (the same in spades with big casino and gone all-in!) That kind of lifestyle tends to hinder development of what are, after all, a couple of places to store fat. Now that she's a little less active, puberty has an opportunity to finish up. You see the same thing with gymnasts and swimmers too.

You forget what Subaru is. None of that applies to her. The only original equipment left is her brain; everything else is metal and plastic.

(Wonderduck, please delete the misformatted version of this comment.)

11 Hm, I thought she was not quite that cyborg-y; we see her pretty bloody in Strikers. Though yeah, at that point normal development is right out the window...

But she's not purely what we'd call a cyborg, right? I mean, she did grow up from a little kid like that.

12 Subaru: Ginga and Subaru had to go in every few months while they were "growing up" to have their frames remodeled, and increased in size. It simulated the normal growth pattern of people with flesh bodies. That process wasn't complete at the time of StrikerS; we see Subaru and Ginga both go in for their latest rebuild at one point in that series.

This didn't happen for the Numbers; Scagliatti didn't care. Each of them appeared in their full-sized form initially even though the personalities were those of kids.

But all of them are what Ghost-in-the-Shell refers to as "Full Replacement cyborgs".

13 Man, it's been long enough since I've watched Strikers that I'm rusty on that. Obviously time to fix that!

14 I just watched the first Nanoha movie, on the basis that it might make ViVid a bit easier to understand without having to watch all 13 episodes of the original. I'm not sure it worked, I might have to watch the rest of the series now.

15 Riktol, I haven't watched either movie, so those with more info please correct, but my understanding is that the movies are based on the first two series, while Vivio and most of the Belkan stuff doesn't appear until the third series, StrikerS.

Ben, that's almost correct. Even so, the second movie (which introduces Hayate and the Wolkenritter) is a lot more helpful than the first one.

But the Numbers and Vivio (and Erio and Caro and Subaru and Teana) are all from StrikerS. And Nanoha and Fate and Hayate are all full grown beginning with StrikerS, whereas in both movies they're still kids.

17 Riktol, if nothing else, watching the movies will give you a good foothold in the Nanoha universe.  I may be in a minority here, but I believe both movies to be superior to their respective series.

That's not a knock on the series... I think A's is as good a piece of anime as you're going to find, particularly in the MG genre... but the movies cut away a lot of stuff the stories don't really need, and you get a tighter experience as a result.

As mentioned though, StrikerS is the source of a lot of the characters and backstory for ViVid.  I love StrikerS, but I'm in the minority.  It's also 26 eps long.