Behind The Curtain Over at The Fungus, friend Ed is having some problems.  His mother passed away a few months ago, and a lot of what he's talking about sounds very familiar.  Over there, I left a comment on a different post about how the most surprising things can sneak up and bite you when you least expect it.  If you're interested, read on... if you're not, enjoy the cute girl and rest assured that there will be another episodic review of Rio Rainbow Gate! coming soon. 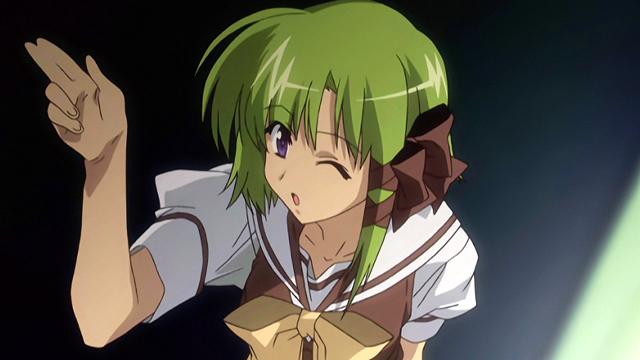 Supposedly, the sense of smell is the one that's tied the most to memories.  Something about the olfactory processor being located near the part of your brain that does the whole recollection thing, I guess.  Anyway, you smell hairspray and your memory kicks out the time you got your hair trimmed by the supermodel masquerading as a hair stylist.  Or you smell foam rubber and Kentucky Bluegrass and you remember the time you blitzed the QB from the linebacker's position, realized that it was a running play, guessed right on the hole the running back was going to choose, and knocked his helmet into the next county, earning you the applause and adulation of your comrades on the team.  Or you smell sunflowers and remember the time you were run over by a pony when you were seven and on a field trip and everybody in your class pointed and laughed at you and there were sunflowers nearby where you dragged your trampled body out of the dirt and mud of the corral and you vowed to take vengeance upon everybody who witnessed your shame... or maybe that's just me.

Anyhow, it doesn't take long for that sort of thing to take hold.  During That Terrible Weekend, there were many rules that you had to follow to move in and out of the ICU.  The biggest one involved hand sanitizer.  To enter the ICU ward, you had to liberally dose up your hands with the stuff.  To enter a room, even if you hadn't touched anything in your trip from the ICU entry door, you had to zap your hands with hand sanitizer.  To LEAVE a room, same thing... and of course, to leave the ward, yet another squirt of the alcohol-based concoction.  There was one time on Saturday that I came back from lunch, sat down in the chair next to Momzerduck's bed, and no sooner had I done so than they kicked me out to insert a more-or-less permanent port for her dialysis hookup.  Total elapsed time in the ICU ward: one minute, and I had to sterilize my hands four times.  Of course, if you've ever had someone in ICU, you know that you'd be willing to bathe in the stuff if it'd help.  But if you've ever used a liquid hand sanitizer, you know there's a distinct odor about it.  After three days of squirting it on your hands, you just can't get it out of your nose.

Flash forward a couple of months.  The H1N1 "Hamthrax" pandemic fear is sweeping the nation, and Duck U. has more than a few cases.  Overnight, signs appear around campus instructing everybody on the best way to limit the spread of cold and flu, usually mounted directly above a wall-mounted hand sanitizer dispenser.  Not even thinking about it, I reached out and depressed the activator lever, dumping a load of the stuff into my bare palm.

And began to sob uncontrollably... great heaving sobs, bawling like a little baby, right there in the lobby of the student center.  It took what felt like hours to get myself under control, as all the while students walk by with concerned or compassionate looks on their faces... or none at all, not willing to make eye contact with the weirdo crying his eyes out right before they had to get to class.  Heck, at that very moment, I thought I was going insane... for no reason I could name, I just broke down!

Two days later, I'm chatting with one of my coworkers in the Duck U Bookstore.  She reaches under the counter, pulls out her bottle of sanitizer, pops it open and squirts it onto her hands... and tears start to pour out of my eyes again.  Only this time, I was able to figure out what was causing it: smell memory.

Suffice to say, I've never come close to hand sanitizer again.  It's amazing how something like that can just sneak up and bite you, with nary a clue that it was going to happen... which makes me scared that I may never be able to eat at a particular Greek restaurant near the University of Chicago Hospitals again.