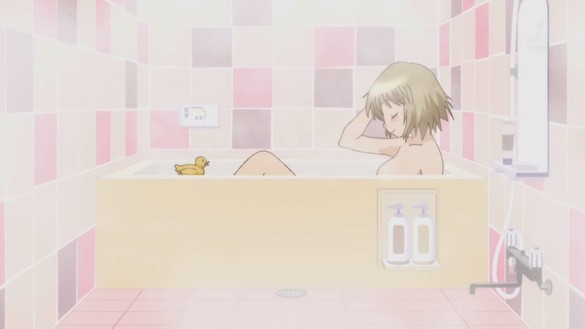 -Hidamari Sketch x Hoshimittsu, ep02
This makes three different duckies we've seen accompany her into the bath.  I think we can actually begin to count her amongst the ranks of the collectors!  And here's the thing: it's a new style of duckie, to boot: 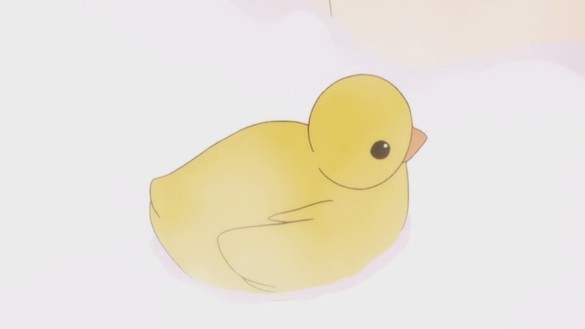 Her previous duckies have a much larger open bill, painted eyes and more detail to the tailfeathers, like so: 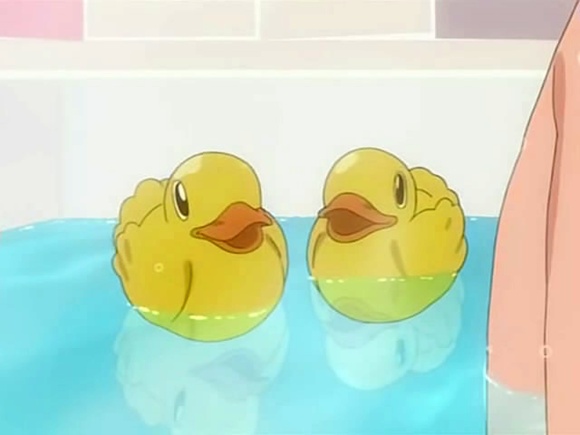 -Hidamari Sketch x 365, ep05
...so it's pretty clear that she's gotten a new one.  Or the animators drew it wrong.  But I'm going with the first guess, because it fits my reality better!

And here's the neat part.  If she DID get a new duckie, the other two are somewhere in her apartment, because Yuno's not the type who could throw away a duckie.

1 I just have to wonder how many otaku in the world geek out over rubber duck appearances in anime.  That's awesome.

...and much less creepy than drooling over the sideboob.  Which, y'know, some more conventional otaku would.  Not me though.

3 Yuno definitely looks bustier in this picture than in previous ones, but she also looks taller.  Did she have a growth spurt?  (Is she young enough to still be having growth spurts? ISTR she's a high school junior, but I could well be wrong on that.