WoWs: Just Battleship Things Are you guys familiar with the old joke involving a battleship and a lighthouse?  World of Warships lets you repeat it yourself! 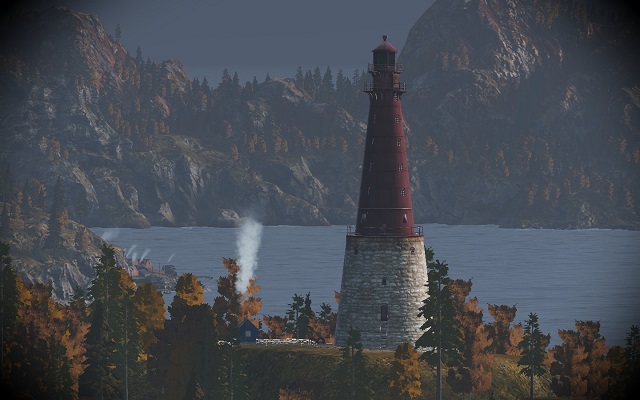 I actually really appreciate these little touches the game throws in.  They didn't have to put a lighthouse in the game, or a little town complete with moving milk truck, or things like that, but they did, and it makes it much more fun.  My favorite has to be on the map called "Polar", which has a dirigible floating around it.  The first time I got that map and saw it, I yelled "DIRIGIBLE!!!" in chat, and started giggling.  Then I went out and did something like 120k damage.  Ever since, I can't start playing that map until I see the dirigible.  I've even had my entire team looking for it.  Most of 'em had never seen the dirigible before, can you believe?  To be fair to them, there are other things to be looking at.  Things like... 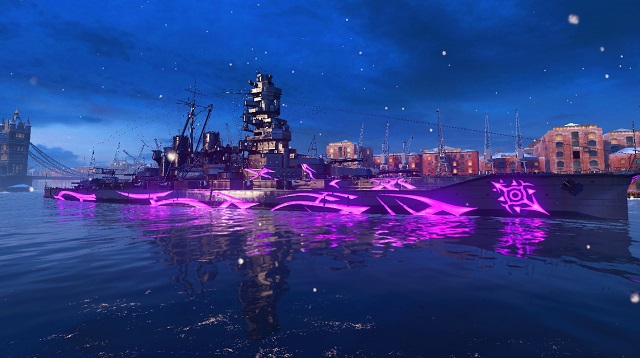 Kongo!  Yes, I've managed to earn myself a couple of ARP ships.  Funny how that happened... I wasn't even trying, and when I reached the "yay" point the game didn't happen to mention it.  It wasn't until later when I reorganized my ship carousel that ha-ha! there they were.  "They?"  Why yes, "they."  Not only Kongo(-desu), but... 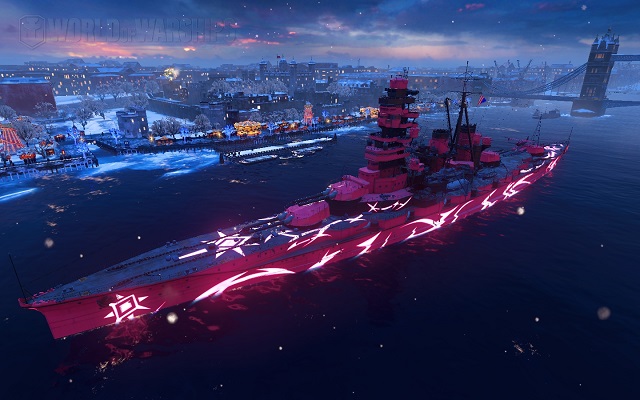 Hiei!  I've actually had better luck with Hiei than Kongo, even though they are exactly the same ship, just with a different paintjob.  I can only assume it's because da red wunz go fasta.  Which make it the exact opposite of...

...the New Mexico, which is not red.  Nor is it fast.  It wouldn't be fast if you threw it off a cliff.  There's nothing it can't turn into flinders and scrap metal, though.  I've had soem very good games with the NMex, including one match pvp match where I deleted two enemy cruisers with two consecutive broadsides.  Maybe they'll learn not to give a battleship their entire side as a target next time.  Even better, the NMex can take a pounding and keep going.  I've seen it bounce Nagato and LOLorado rounds like they were marshmallows.  Which is good, because I'm not entirely skilled in the esoteric world of battleship combat yet.  Gimme something with torpedoes any day.

1 For the final ARP event, they made it much easier to progress through and earn the ships.  It took a bit effort to get to the final tier, but it was still only about what it took to earn Takao the first time it came around.  I was able to fill in and get the ARP Myoko which I'd missed the first time around by not having the tier VII ships needed.
Kongo and her sisters are really nice, and any time I need to earn XP or credits, guaranteed, they are kind of my default.
New Mexico is an interesting ship.  I didn't really grok her at the time, but in retrospect she's excellent training for Colorado.  They are both much the same, large, slow targets, that have a ton of armor and will smack you hard if you foolishly let them get into effective range.  They both are easy meat for clever torpedo boats or any BB two tiers above them, but even when down one tier they can aquit themselves quite well.  I blew through them both very quickly with a succession of high damage, high XP matches.  And then you get the North Dakota, and everything you learned about US Battleships changes, for the better.

2 I love flying around and looking at things in the God Mode.  Too bad you have to die first to get it, but I'm good at that.  I JUST finished the final ARP challenge tonight, and was a bit disappointed to discover that the final three you get don't actually come with ships, in fact, two of them are Tier 11 Submarine Captains!

I do not Cruiser very well. I did most of the missions in the Takao, trying to get better, but other than one very lucky match where I was in the right place to finish off FOUR low heath ships (for 29K in damage!), I was horrible.

In a Carrier, I will make you hate life though.  Unless I'm in my Ryujo and they send up an Independence with its frigging overpowered 6 plane squadrons.

3 I'm absolutely delighted that in a semi-realistic naval combat sim, they've thrown in brightly glowing anime stuff. Also, that "Kongu-desu" video clip gave me a much needed laugh this morning, so thank you.

4 I was really hoping to spend some holiday time playing botes, but the littlest came down with RSV and we've been in the hospital since Christmas Eve. He's well enough now that we may go home later today, but in the mean time, the eldest has acquired his own winter bug while staying with the in-laws. I guess it's a good thing I finished off Takao in November. If I'm lucky, I may still manage to get the Myoko finished this time around.

Getting port slots for duplicate ships has been nice.

5 Very annoyed that it finished on the 30th, not the 31st.  Or maybe they meant "we remove it on the 31st".  Whatever.  I was 5k from finishing the last task when I decided, "It's late, I'm going to bed and finishing tomorrow."
Grrrr.

6 I got Haruna and her magical mystery coat, so I'm content. And a supercontainer spit out ten million credits shortly after our discussion over the weekend. I even had a few good games (that 200% bonus plus the free premium got me up over 5k exp for some wins). I even got past the Gnevny, which I scuttled with glee... I never did get that ship to work right.

Still haven't quite polished off the New York. Fuso's fun, though, not quite as zippy as Kongo but what it will do to a cruiser...

The torpedo arcs on those German destroyers...

7 I've gone back to my Tier 5 carrier, because in it I am a BRUTE! I can't handle a Takao properly, not yet anyway.

My one problem with the game is a once daily BSOD of different flavors. Only happens during the game (In port, playing or dead), not predictably, other than after the reboot, I'm good for the rest of the day. Doesn't happen in WoT or anything else.

8 I don't get a BSOD but I'll usually get at least one crash to login, just as a game starts. It's gotten so bad that I've had to reload the game to stop it.  And forget trying to download the public test.  It takes me days of it hanging.

Interestingly, I'm having the same experience with the Mahan.  I put it down to the superior torpedo range.  It's the first American DD where I don't just use the guns primarily, and then torp if I find myself in range.  But I routinely have terrible luck with the New Orleans CA.

Win % is sub-50%, Warships Today Rating in 700's, Survival around 20%,  Kill/Death ratio 0.5, and I usually collide with islands about three times a game.  Sometimes the same island. (I'm not kidding)

9 I don't understand some of the figures at Warships today. And I run WoWS clean, although some mods would be nice. XVM is something I like a lot in WoT.

Other than a few early American ships, I mostly have Japanese, and of course, ARP.

Not sure how I ended up with some of the extra captains for the early ships.