Wonderduck's Favorite Anime Series Of All Time: Number One What makes a favorite?  There should be something about it that keeps bringing you back to it, obviously.  The characters, the story, the drama or the comedy, something.  But lots of shows have great characters, or an outstanding storyline, funny jokes or gripping drama... what makes one series stand out above all others to become a favorite?  And what elevates a favorite to The Favorite?  Sometimes... rarely... the entire package is so outstanding that it's hard to point to one part and say "there, that right there makes it just that good."  And yet, that's the case of my Number One Favorite Anime Series Of All Time.  It's the rare situation where everything is so good that the whole is greater than the sum of its parts... and the parts are all excellent.

Even if it's a show about nothing. 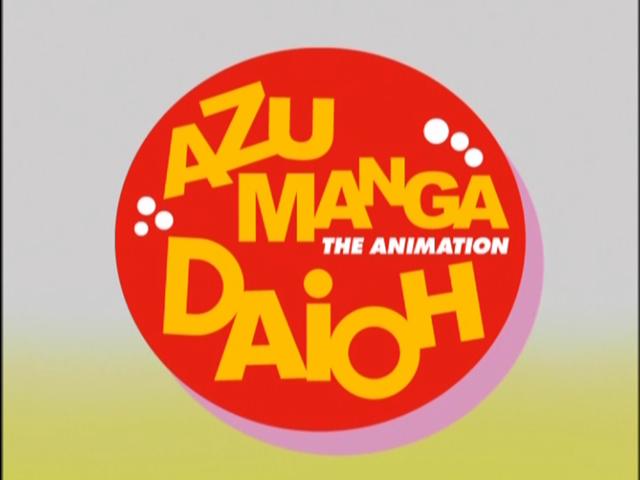 Azumanga Daioh (hereafter, AzuDai) is a 2002 series from the production house JC Staff.  26 episodes long, it was directed by Hiroshi Nishikiori from the original four-panel comic strip by Kiyohiko Azuma, which ran in Dengeki Daioh magazine from 1999 to 2002.  Oddly, it was originally aired as 130 five-minute segments which ran Monday through Friday, which were then compiled into a standard length episode on the weekend. 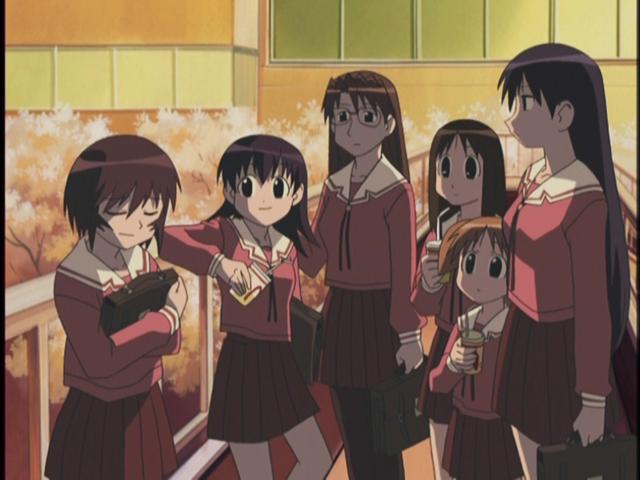 (left to right: Kagura, Tomo, Yomi, Osaka, Chiyo, Sakaki)
Saying that AzuDai is "about nothing" isn't just a conceit.  The show follows the everyday antics of six high school girls as they move through their lives.  The characters are somewhat eccentric, but still pretty normal; none of them feel weird or out of place and chances are that you know someone like each of them.  The closest the show has to a main character is Chiyo-chan.  She's a 10 year-old genius who's been promoted into the high school, is remarkably cute, and is good at everything but athletics.  Sakaki is tall, cool, and a loner... because she's tall and cool, nobody has wanted to try to get to know her.  Cats hate her.  Tomo is known as "the wildcat idiot."  Energetic, loud, prone to falling asleep in class, something of a jerk, she has the ability to be introspective occasionally.  Yomi is the nearest AzuDai has to an average girl, though she has some quirks as well... a bit of a temper, sensitive about her weight (for no reason that can be seen), smart but not overly so.  She's been friends with Tomo since childhood, and is constantly regretting that fact.  Kagura is the resident jock who has a one-sided athletic rivalry with Sakaki.  Osaka is... different.  Her view on the world is a bit off, but still makes sense, sorta.  She's basically living in a daydream.  Three of their teachers are also characters of slightly less importance.

With an ensemble cast of that size one would expect that one or another would be lost in the shuffle, but that's not the case.  All of the girls regularly have their time in the sun, and you're never left wondering "hey, what happened to...?"  Kagura joins the group in their 2nd year, so she's the least developed of the bunch, but even her character is fully fleshed-out.  There are no cardboard cut-out people, no stereotypes, here. 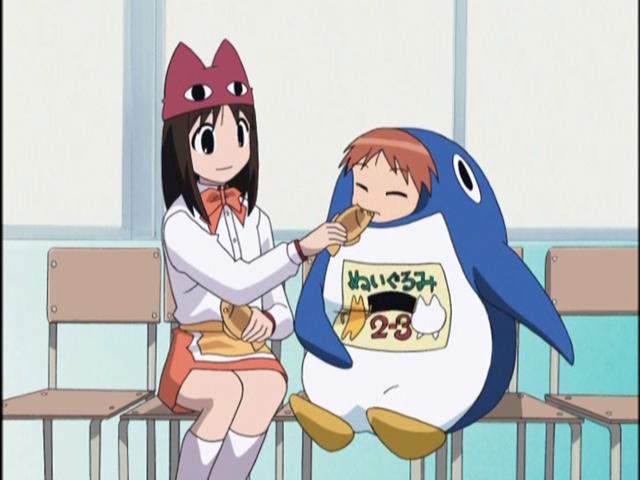 The show is mostly comedy, but only rarely of the "here's a joke, now laugh" style.  It's more of the everyday type of humor, like Chiyo in a penguin suit or Yomi getting frustrated with Tomo or Osaka getting the hiccups.  It may not sound like much, but AzuDai routinely gets the viewer laughing out loud at something small.  It may not always be subtle humor, but it's almost always successful.  The English dub does a great job of translating the jokes, particularly much of the wordplay, for American viewers.  While I don't, as a rule, listen to the dubbed versions of anime, AzuDai's is excellent. 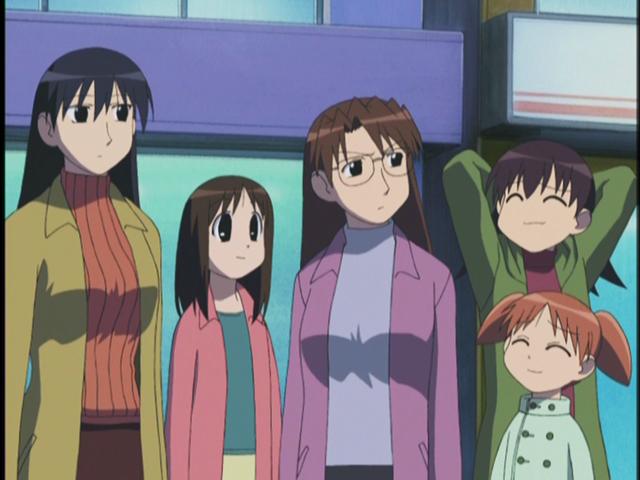 Visually, AzuDai ranges from "pretty good" to "good".  The show was computer animated, as opposed to entirely hand-drawn, but the technology was still somewhat in its infancy.  No stunningly detailed landscapes or sharp details here, but the show doesn't require such things.  The main criticism I've seen leveled against the series' graphics is that the backgrounds are often plain (such as in the above screenshot) or non-existent, and that's surely true, but when it's appropriate the backgrounds can be detailed enough. 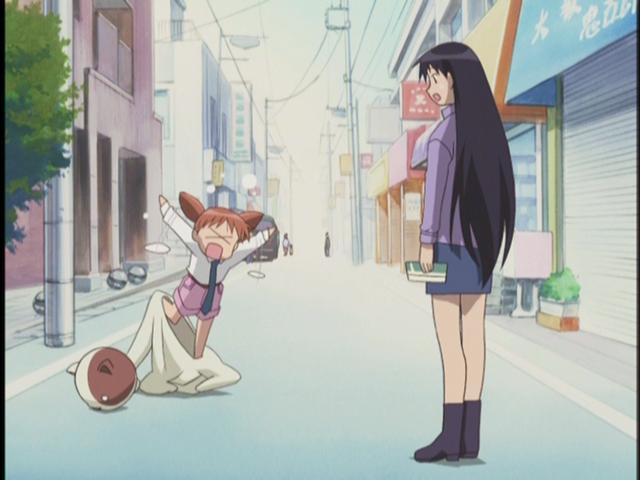 Of course, pretty pictures can only take a show so far.  If the show doesn't make you care about the characters, you can have the greatest artwork in the world and it'll fall flat on its face.  AzuDai succeeds in making you like the girls, just by being around them.  Along the way, you learn their personalities, their hopes and dreams, their fears and weaknesses... in short, they're charmingly human.  As mentioned previously, these could easily be people you knew in high school or college... or now. 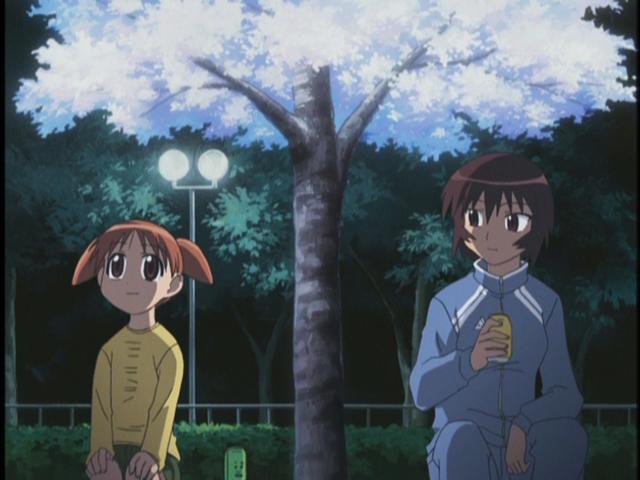 Through the years I've been a fan of the series, I've discovered an interesting fact: to a point, the longer you've been out of high school, the more you'll like AzuDai.  Members of the Duck U. Anime Club, college students all, liked the show but weren't crazy about it.  However, when one of Duck U's administration staff sat in on a viewing, he loved it.  It's clear that nostalgia is involved with the success of AzuDai, which upon reflection is amazing.  That a show about Japanese schoolgirls can invoke pleasant feelings of nostalgia from an American man in his 50s that's never seen anime before, like that administrator, should tell you a lot about how well the series "gets it". 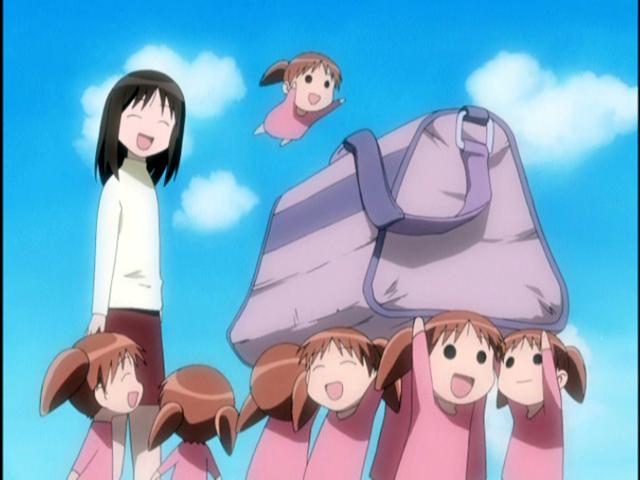 One delightful piece of the puzzle is the show's music.  Recorded on an eclectic selection of instruments by the Kuricorder Pops Orchestra, it perfectly fits the quirky personality of the series.  Mouth harp, bongos, recorder, and toy piano can all be heard in the jazz-influenced musical score.  The soundtrack albums, heard alone, are wonderful pieces of music on their own; when heard in the anime they just amplify what's happening on the screen without being obtrusive. 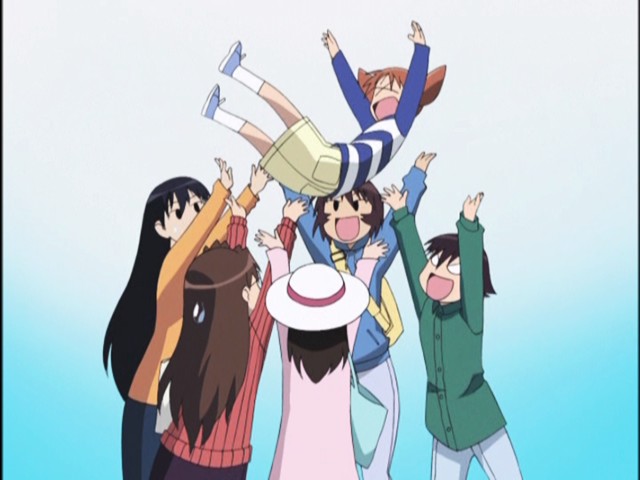 AzuDai is my favorite anime ever because of the entire package.  Never sappy, never maudlin, always entertaining, it's a gentle reminder of what was a better time... even if it wasn't a better time at all.  There's almost no action to speak of, nothing blows up, there's no angst or heavy drama, and essentially no conflict at all.  Yet without a doubt, the entertainment level of the show is higher than what you'll find in hundreds of other series.  Not for nothing has AzuDai been used as a yardstick to compare similar shows to, and the comparison usually ends up as "it's no Azumanga Daioh."  It's been my favorite show for years, a ranking that's not likely to change.

Not bad for a show about nothing.

UPDATE: I realize that I neglected to mention that, along the way, I named my computer Chiyo-chan, and have a douga from the production on my wall (and three others in a box next to my computer desk). 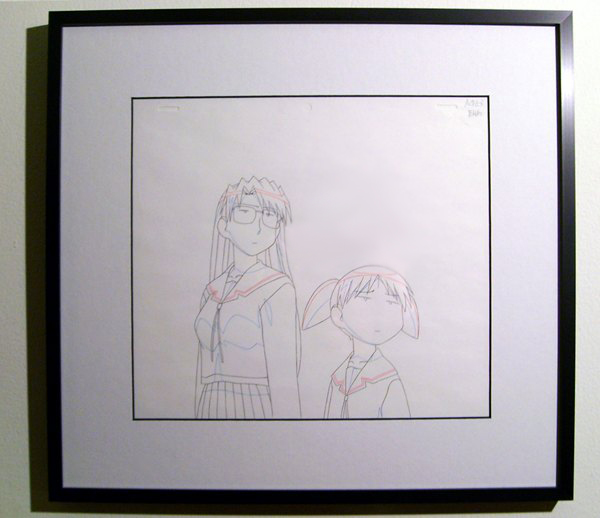 2 This was a GREAT show to work on.

Part of it was the inherent charm of the show. Sometimes you'll have a show that's terrible - the time you spend on it is a sentence. When that happens, you don't spend time running down every last reference or thinking too deeply about how to couch a particular line - you just get it done, to get it the heck off your desk and out of your life.

Sometimes you'll get charmed by a show that's not really all that good, but happens to work for you in particular. That can be hard if you need the support of other people to get the job done right, and they don't feel the same way about the show. I can think of at least one show that I quite enjoyed, but that we absolutely botched, and nothing could be done about it because nobody else gave a rat's ass about it.

And then there were the shows that everybody liked. That's Azumanga for you. I don't think anyone was expecting runaway commercial success or anything. But it got a lot of extra effort put into it simply because nobody wanted to say "you shouldn't be spending so much time on Azumanga." I probably spent longer working on the Azu script with Shoko than I spent on titles I -actually timed-.

Shoko did a bloody amazing job on the translation. And the dub guys really pulled through and turned in some fine work, which wasn't a slam dunk on a show where almost all the characters are young girls. In short, everything came together just right - it was quite possibly, taken in sum, the best time I had working on anime.

It's not great because of the characters - Tomo's annoying, Kimura's creepy, and Chiyo is just plain fake. As you mentioned, Duck, it ain't because of the gripping plot. But as a pure expression of a fine ideal world, it just works - evoking the same kind of nostalgia that you get from Charles Schultz, but with much better production values.

3 Seconded on all counts.  I love this series!  I do have one moment that always comes to mind when I consider favorite scenes (involving eating, and the altitude at which said task is performed) but almost everything else in Azumanga Daioh shares second place equally.  Even Kimura.  As long as I don't think about it too much.