When The Cherry Blossoms First Fell Ensign Jimmy Green stared at the horizon... nothing.  There'd been nothing there for nearly ninety minutes, and he finally began to feel like he could relax, just a bit.  Below him, in one of the gun tubs, he could hear shell humpers joking about how the Jap fleet had gotten away, but Green knew in his bones that he and his ship were alive only by the Providence of fortune, a confusing decision by the Japanese to break off, and the White Plains' position towards the front of Taffy 3's formation.  At least, he thought ruefully, it became the front when the collection of Kaiser Coffins turned away from the Japs.  Yet that was the difference between him being there on the tiny island of an Escort Carrier... and being in the Pacific with his ship sitting on the bottom.  Like the Gambier Bay, he thought glumly.  He was pretty sure he'd seen her roll over and go down, with a Jap cruiser standing a few miles off throwing shells at her the whole time.  Now, though?  Nothing at all.  It was like the Japs had never been there, except for the smoke coming from Kalinin Bay, that is.  He'd overheard one of the pilots saying that her flight deck looked like swiss cheese from all the holes in it.  Green didn't like the sound of that very much at all.  Why in the world had the Japs turned around, anyway?  It didn't make sense.  When I saw that big bastard come over the horizon, I was sure I was dead, he thought to himself, and it sure ain't that they were scared off by a handful of destroyers and some Wildcats.  Then those big battleship shells started to splash around him, and Cap'n Weller kept the White Plains dancing between the salvos.  Well, lumbering at least; nobody ever accused a CVE of being nimble.  Well, some coffee might be nice.  It was only after he got the cup that he realized his hands were shaking. 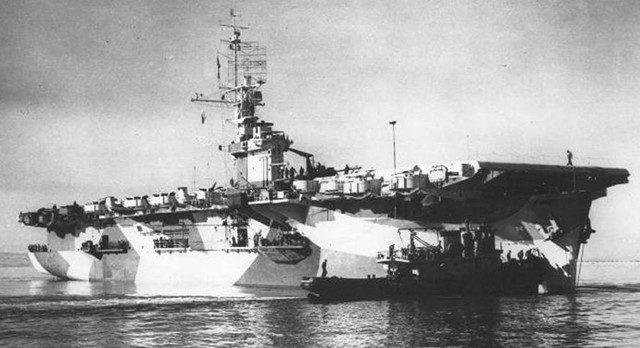 My hands are shaking, thought Lt Yukio Seki.  How odd.  I even had some sake with the Admiral before takeoff.  He grimly chuckled to himself.  Of course, I usually plan to return after a mission.  He glanced around him... yes, the four other A6M2s of his Shikishima unit of the Tokubetsu Kōgekitai were still there.  Just above and ahead, the four A6M5s assigned as escorts kept a careful eye on the surrounding sky.  I hope they do a good job, Seki thought.  I'd hate to die before I get a chance to die.  What is wrong with me?  I volunteered to lead this mission, I begged the Admiral for the chance.  I've had plenty of time to think about what I'm to do, why am I being grim now?  I should be thrilled, for the Emperor himself will hear my name today!  But my hands are still shaking... wait.  The escorts had just waggled their wings and turned around.  That can only mean... there.

Stupid pilots, thought Green.  We're not steaming into the wind, the decks aren't clear, how in the world do they expect to land?  Lucky they don't get shot down just outta spite.  Waitaminnit... sunuva... "THAT'S A JAP!" he bellowed, just as the General Quarters bell began to clang.  Where in the world did those come from?  Why didn't radar pick 'em up?  And why aren't the goddammed guns firing???  As he looked around, the Ensign noticed the Kalinin Bay firing rapidly at a diving Zero.  Pilot must be dead, doesn't look like he's going to pull out.  In fact, it kinda looks like he's going to crash.  Wow, now that's just bad luck.  He winced when the Jap hit the port side of the flight deck, then blinked.  Is that another one?  Holy hellfire, it is!  Before he could say anything, the second plane neatly stumped off one of the Kalinin Bay's stacks.  He turned and ran back into the bridge, coffee forgotten.  The Captain's gotta know about this.

My turn, and that one looks undamaged.  Lt Seki pushed his A6M2 into a dive towards the slowly maneuvering flat-top.  Come in from astern, hit about a third of the way up the flight deck.  If only it was bigger... then it wouldn't be like trying to hit a plate from 2000 feet.  Oh, they're shooting... funny, I didn't expect that at all.  How dare they defend themselves from my sacrifice?  There was a loud thwock sound from somewhere to the left, and the plane rolled away from the carrier.  Oh no you don't, you damn piece of junk... ah!  There's another carrier right there...

By instinct, Green ducked as the first plane went by too close and too fast.  Have they gone crazy?  They're trying to crash into us!  Wait... first plane?   He glanced over the railing and saw... 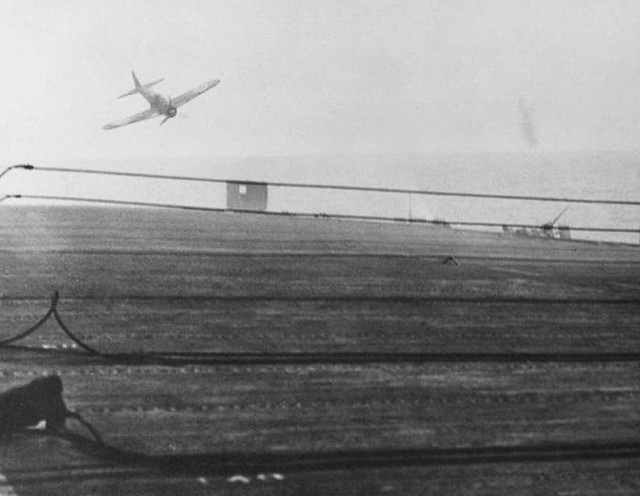 ...the hull was peppered with fragments when the Zero crashed into the White Plains' wake.  But what happened to the first one?

That gunner got lucky, but it wasn't enough to stop me, thought Lt Seki.  And there it is.  The small carrier now looked very large indeed as the leader of the Shikishima unit crossed the fantail and shoved the nose down while simultaneously pulling the bomb release handle.  There, my duty is complete.  It's a pity I'll never see Mariko aga... 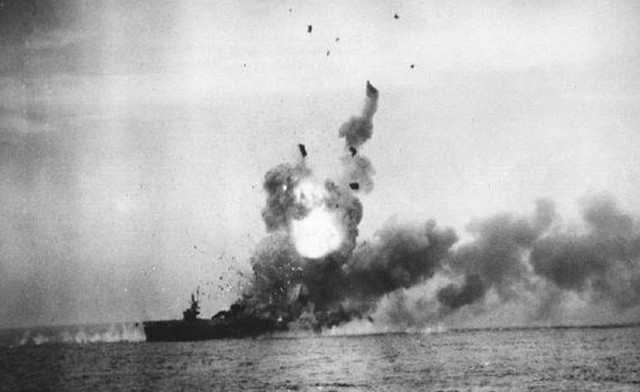 Someone was yelling: "That Jap bastard got the St Lo!"  Ensign Green was too stunned to be able to figure out who.  He'd just seen an organized attack by men willing to kill themselves to kill their enemies.  Holy cow, what can we do against that?  Then another, more chilling thought, crossed his mind: are there any more?   Ensign Jimmy Green frantically began to scan the skies.