What's Wonderduck Watching? Spring 2011 Edition Or, more correctly, "what's Wonderduck not watching?"  I've been a fan of anime for a long time.  I became a diehard fan maybe ten years ago, and was a casual fan for some years before that.  Over the years, my desire to participate in this hobby has been universally high; shows may come and go, both good and bad, but I've always enjoyed the actual watching of them.  Until now.

Which is weird.  Readers of The Pond know my tastes: slice-of-life, romantic comedy, melodrama, that sort of thing.  "Cute girls doing cute things in cute ways" would be a good description of the type of show I generally go for.  Throw in the occasional action-based series that catches my eye at the right time, and you've got me pretty much covered.

Knowing that, the Spring 2011 season has a good handful of shows that may as well have been written specifically for me.  Yet I find that, not only am I not particularly enthused about them, I'm having a hard time watching whole episodes at a time. 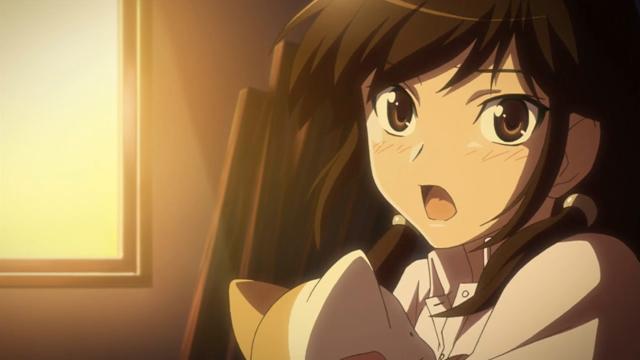 Picture from The World God Only Knows II, which I'm probably not going to watch either.
Let's take a look at what isn't catching my fancy this time around, shall we? 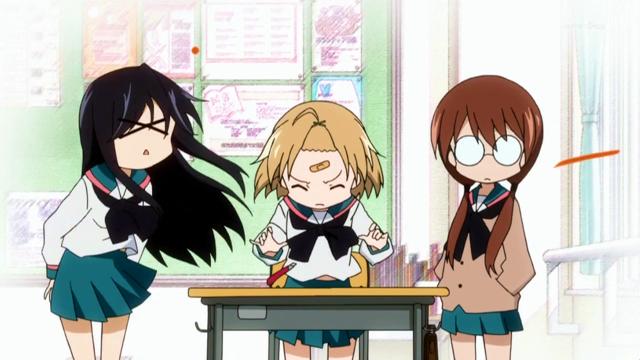 Lucky Star meets... I dunno, a bucket of water maybe.  It's fun enough certainly, but nothing that's gone on has really made me think "wow, when's the next episode coming out?"  The show seems to revolve around Run, the blonde ditz who is always doing dumb things... like going to school without socks or underwear.  Of course, her friends try to save her from these dumb things.  Hilarity ensues.  The one with the black hair is a clone of Mio from K-On! without the musical ability.  The one with the glasses is the smart one.  Not shown is the short one who seems to have a thing for Run, to the point of assaulting anybody who stands near her.  It's based on a 4koma, and thus basically goes from one gag to the next in short spurts.  Blandly funny. 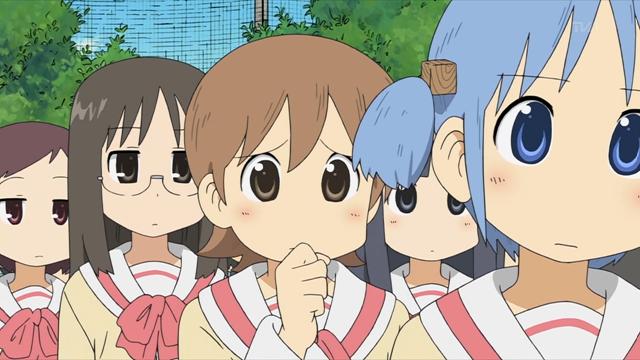 Azumanga Daioh meets a 55-gallon drum of water.  Also based on a 4koma, but even more gag-based than A Channel.  The similarities to AzuDai is even more pronounced by the resemblances to Chiyo-chan and Osaka that a couple of characters have.  There's also an eight-year old genius professor that looks like Becky-sensei from Pani Poni Dash.  And random wildlife in the halls of the school.  Wacky hijinks ensue.  Produced by Kyoto Animation, which means I pretty much have to watch it, but I'm not sure if I'm enjoying myself yet.  Wacky is fine, but wacky for wacky's sake usually doesn't work for long. 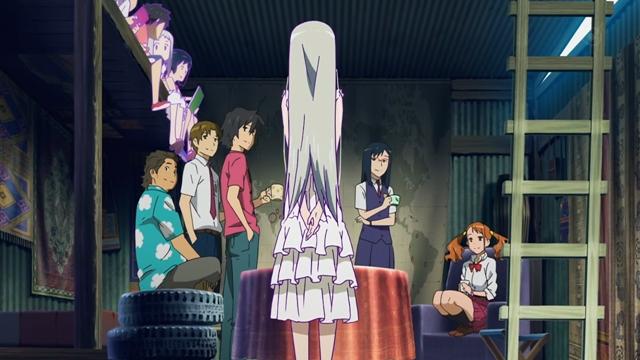 I so want to say that this is Kanon mixed with half the Pacific Ocean, but I can't.  For one thing, there's no snow.  There is a dead girl, though.  The short version of the story is that a group of childhood friends fell apart after one of their members was killed in a terrible tragedy.  Now ten years later, she's returned in hallucinatory form to one of them, and she needs the whole group to get back together for reasons unknown.  But everybody's changed, and nothing has stayed the same.  Sad moping ensues.  Which makes me wonder why it's the only one I managed to watch all the way through on the first attempt.  An original story by A-1 Pictures, the same group that animated Fractale last season and Sora no Woto last year.  Based on that track record, it should at least look good.

There are a couple of other shows that I haven't had the gumption to load up and watch, but I'll eventually get around to.

So why the malaise?  Could it be that the Rio Rainbow Gate! experience burned my love for anime out of me?  Could I just be going through one of those phases that every fan hits occasionally?  Or is it that this season just isn't that good?  Time will tell... I'm hoping for the second possibility.  Despite my pessimism, I do see possibilities for all three of these series.

1 The last two episodes of Madoka run on Thursday, and the Strike Witches movie comes out on Friday. So at least there's a little bit to look forward to.

2 And yet you watched all of Rio Rainbow Gate...

3 Basically the only show I got through last season was Fractale, and after the first few episodes I only hung in long enough to see how it ended. (I was placing bets with myself on which trope they'd go with, basically. Oddly enough, I won my bet. And I'm CRAP at predicting things.)

My lack of enthusiasm, let me show you it.

4 I think Dog Days is going to turn out to be fun to watch. It ain't great art, but it isn't miserable crap either.